Virus heads for a collision with wildfire season 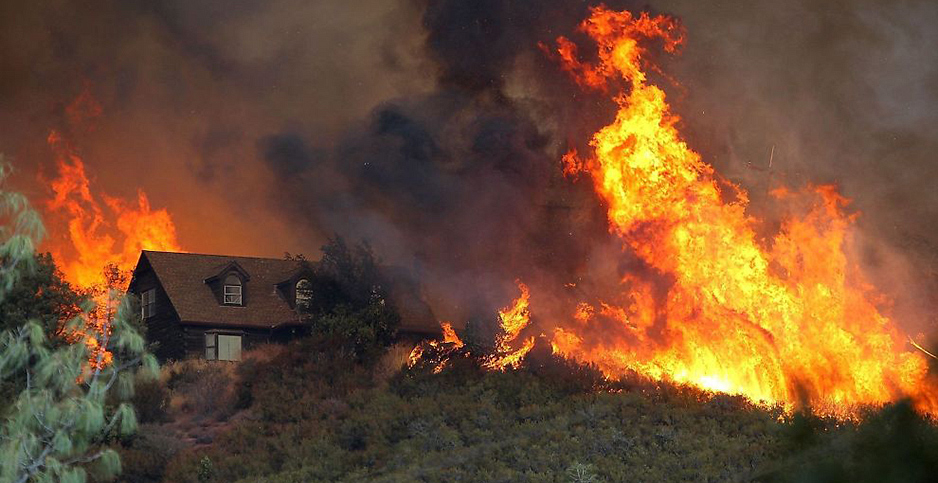 The coronavirus pandemic is complicating evacuation plans for California's wildfire season. A fire overtakes a house in Lake County in 2017. Bjorgialt/Wikimedia Commons

The COVID-19 pandemic is poised to collide with a new era of ferocious California wildfires, sparking efforts to prevent the contagion from spreading in evacuation shelters.

Hot, dry weather known to raise the risk for wildfires started last weekend in California. Fire officials warn it’s just a matter of time before a blaze ignites and that residents must get ready.

Meanwhile, those who handle evacuations have been planning for weeks how to keep people safe.

"If anything could make our current [pandemic] emergency worse, the threat of wildfire is up there," state Assemblyman Marc Levine (D) said during an online town hall last month. "COVID-19 may have disrupted our lives, but it will not stop the threat of wildfire. In recent years in California, the wildfire season has been starting earlier and ending later."

The season starts as California battles both the wildfire threat and a high incidence of COVID-19. The Golden State has about 113,000 confirmed cases of the disease, with more than 4,250 deaths. The number of new confirmed cases per week jumped last week, and health officials have warned a resurgence is likely in the fall.

Meanwhile, California officials are working to prevent the kinds of fires that have broken records for deaths and destruction. The Camp Fire north of Sacramento in 2018 killed 85 people and destroyed the town of Paradise in Butte County. A year earlier, more than a dozen fires scorched Sonoma and Napa wine country. The deadliest, the Tubbs Fire, killed 22 and razed more than 5,600 structures.

Climate change has intensified blazes in the Golden State, fire officials said. Hotter summers bake trees, brush and other vegetation into dry tinder. Blazes burn hotter and are harder to knock down.

That makes it important to get residents out in advance when there’s heightened risks for fire, officials said.

But fire authorities worry this year that people will weigh whether they really need to leave their homes, fearing they might catch COVID-19 in a shelter.

"That is absolutely a concern, that people will not leave their homes," Mike Mohler, chief at the California Department of Forestry and Fire Protection (Cal Fire), said in an interview. "People, they do have crisis fatigue," and while asking them to prepare for extreme wildfires is important, "they’re getting tired."

During a "red flag" event, when strong offshore winds were forecast to hit alongside low humidity and high temperature, firefighters ordered nearly 100,000 people to leave the Sonoma County area. Fire officials worried a blaze could burn all the way to the coast, said Ben Nicholls, division chief at Cal Fire.

Getting people out allowed firefighters to get in and set up fire breaks, which kept the Kincade Fire from advancing. It likely saved homes and lives, Nicholls said.

"It was such a different fire fight, by having the ability to focus on purely fighting fire, as opposed to protecting lives and property," Nicholls said during Levine’s virtual town hall. Fire departments could get their equipment in, Nicholls added, and didn’t have roads "choked with vehicles trying to get out of the way."

"Maybe along with shoes next to your bed, you should keep your mask with you," Levine said during the tele-town hall.

"If you want social distancing, you’re looking at doubling [that number] or even more" this year, he said during Levine’s town hall. "There’s not enough people to manage it. We don’t have enough facilities to deal with that.

"We’re going to be asking people, if you have family you can go to and socially distance, please do that," he added.

The Red Cross already is running drills to ensure it can check people into shelters and keep them separated, said Briggs with the group.

"This is new," Briggs said. "We want to lean forward and not try to learn on the fly."

The Red Cross measured 6 feet and marked it on poles so it could use those to space out beds, he said. During its drills, it set up directional arrows with paths to restrooms and food areas. When the shelters are running, if people arriving are found to have a fever, they’ll get checked by a health official and may have to go to a hospital, Briggs said.

Fewer people will be allowed inside shelters, he said. A gymnasium that last year held 500 people this year will only house 50.

The Red Cross knows that means it will need to open more shelters. It’s investigating additional options such as corporate warehouses, fairgrounds and potentially multiple hotel rooms, Briggs said, It could also mean putting people in shelters in multiple counties, he said.

There’s also the issue of housing firefighters, who often come from all over the state and sometimes beyond during a major blaze. A base camp can need to house more than 1,000 firefighters, Cal Fire’s Mohler said.

"All of that is going to become a much larger footprint" with the need to keep people spread out, Mohler said. "We may have to use a stadium because of social distancing."

An additional element in California is utilities intentionally shutting off power to lower the risk of their equipment igniting fires. Under California law, a utility is liable for damages if its equipment ignited a fire, regardless of whether there was negligence.

More than $25 billion in fire liabilities pushed San Francisco-based Pacific Gas and Electric Co. into bankruptcy reorganization. PG&E shut off power to millions of its customers in five major events last October and November. During power shut-offs, some residents went to evacuation centers.

The potential power blackouts mean "the reasons we need these [evacuation] centers has grown," Levine said.

There are likely to be blackouts again this year if there are dangerous conditions, said PG&E spokesman Jeff Smith.

"Even with how serious the pandemic is, of course, we still have the wildfire issue to deal with, which is a very serious public safety issue," Smith said.

PG&E said it hopes to reduce the number of customers affected this year by a third compared with last year. The utility wants to cut power restoration times in half compared with 2019. It’s pledged to restore power within 12 daylight hours after severe weather has passed.

It’s also mapping out the location of hospitals and other places that could have COVID-19 patients, Smith said. PG&E will look at whether there’s a way to leave them out of the scope of the shut-off or, if not, make sure they have backup power.

The need to mitigate the risk of catastrophic wildfires is complicated by the pandemic, Smith said.

Given the current conditions, "communities that are sheltered at home could face even a higher threat of harm, including the threat posed by evacuations and social distancing requirements," Smith added. "But we are aware of it, and we’re taking steps to ensure that we can take into account all of those public safety concerns."