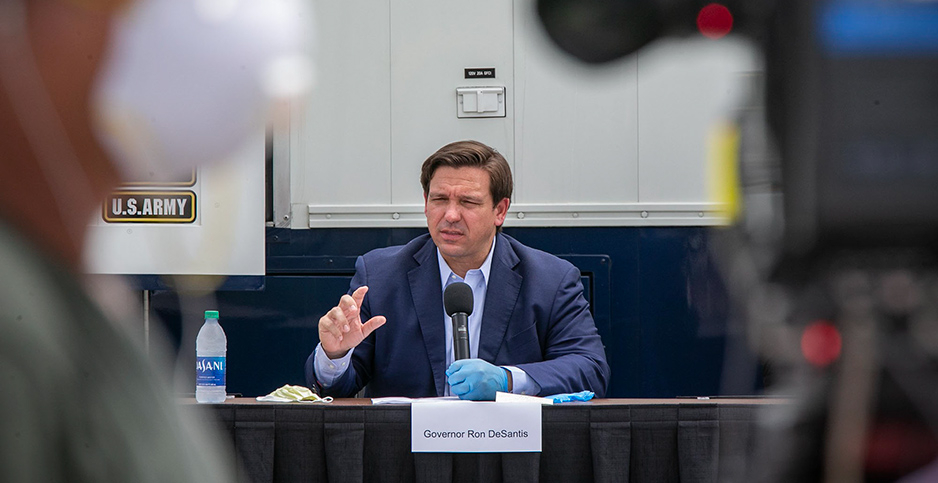 More than a dozen medical facilities built in response to the coronavirus pandemic are located in dangerous flood zones despite federal guidance saying they should be "outside all high-risk flood hazard areas," an E&E News analysis shows.

Temporary medical centers are operating in converted convention centers, fairgrounds and sports arenas along coastal areas that have sustained some of the nation’s worst flood damage. They include Miami Beach, Atlantic City, and all five boroughs of New York City.

The Miami Beach Convention Center, which the Army Corps of Engineers recently converted into a 450-bed hospital, sits four blocks from the Atlantic Ocean in a mandatory evacuation zone that is vulnerable to storm-surge flooding during Category 1 hurricanes.

Flood zones are risky places for temporary medical centers, the Federal Emergency Management Agency warned in guidance this month. Patients may have to be evacuated, and floodwaters could make the facilities inaccessible for employees and suppliers.

"Even a slight chance of flooding can pose too great a threat to the delivery of services provided by a critical facility," FEMA wrote in a one-page fact sheet, referring to the dozens of temporary medical facilities set up in the past month to handle projected hospital overflows due to the COVID-19 pandemic.

"Further, these critical facilities are likely to have occupants who may not be sufficiently mobile to evacuate in order to avoid injury or death during a flood," FEMA added.

Local officials acknowledged some concern about placing the facilities in flood zones but told E&E News they had developed evacuation plans, installed emergency generators and located patients and equipment above ground level. Some said they worked with FEMA to develop flood safety procedures.

FEMA said in an email to E&E News that despite its warnings about opening medical centers in flood zones, "there are not always practicable alternatives."

"If a critical facility must be located in a high-risk flood area" because "no practicable alternative sites exist," the facility should have plans for evacuating and relocating patients, FEMA says in guidance released April 13.

The medical sites were chosen largely for their location near coronavirus hot spots and for their capacity to handle the number of patients expected to need treatment for COVID-19. Roughly 1 million people in the United States have been infected, and more than 50,000 have died.

"Sometimes we have to be pragmatic," former FEMA Administrator Craig Fugate said. "But you also have to have a plan and the resources to evacuate that population if a storm threatens."

Chad Berginnis, executive director of the Association of State Floodplain Managers, said "there should be a high level of initial concern" about putting temporary medical centers in flood zones.

"As a nation, we don’t think — especially in the heat of the battle — about some of the impacts or hazards that an emergency site may have," Berginnis said.

Florida officials chose the Miami Beach Convention Center as one of three temporary medical facilities in South Florida because it’s near permanent hospitals, complies with up-to-date building codes and has multiple floors, said Jason Mahon of the Florida Division of Emergency Management.

Medical equipment has been positioned off the ground to prevent water damage, and evacuation plans were developed, Mahon said.

The large number of temporary facilities being set up in flood zones is partly the result of an unusual pattern in the coronavirus outbreak: The hardest-hit areas happen to be populous East Coast counties, where tens of millions of people live in high-risk flood zones.

Twenty-five counties account for nearly half of the confirmed COVID-19 cases, according to Johns Hopkins University School of Medicine.

Twenty-two of those counties are on the East Coast — and 16 are in New York or New Jersey in coastal areas with large flood zones.

"The number of hospital beds needed requires large complexes that unfortunately are located in the floodplain," said Joel Scata, a climate attorney for the Natural Resources Defense Council. "This speaks to the bigger issue of developing in floodplains in general and how putting critical infrastructure in the flood zone without proper protection exacerbates other disasters."

In Queens, N.Y., which has more COVID-19 infections and deaths than any other county, a 350-bed medical facility is being set up at the Billie Jean King National Tennis Center, home to the U.S. Open.

The tennis center sits next to a highway and about a half-mile from Flushing Bay in what FEMA calls a Special Flood Hazard Area. Properties in these areas have a 1% chance of being flooded each year, and owners must have flood insurance for properties with a federally backed mortgage.

FEMA’s recent guidance says temporary medical centers should not be located in "the entire Special Flood Hazard Area." FEMA also discouraged putting the centers in areas with a 0.2% chance of being flooded each year. The guidance is based on federal regulations that restrict "critical actions" — such as opening temporary medical facilities — in floodplains.

The New York City Health and Hospitals Corp., which runs the city’s public hospitals and opened the temporary center, acknowledged that the tennis center entails some risk. "Much of our medical equipment is electrically run and most of these patients aren’t mobile due to their conditions," the corporation said in an email.

Hospital officials worked with FEMA and New York City emergency managers to make sure the center complies with "necessary safety and emergency standards," the corporation said. Evacuation plans call for moving patients from the tennis center to local public hospitals.

Outside of New York and New Jersey, temporary medical facilities have been opened in flood zones in the Boston area, Baltimore, Delaware and Southern California.

At least nine temporary medical facilities are in flood zones that sustained massive flood damage during Superstorm Sandy in 2012, including Atlantic City.

A New Jersey State Police spokeswoman said that the 250-bed emergency center in the Atlantic City Convention Center is safe because it’s located on the second floor of the building, which has backup power and sits next to an evacuation route.