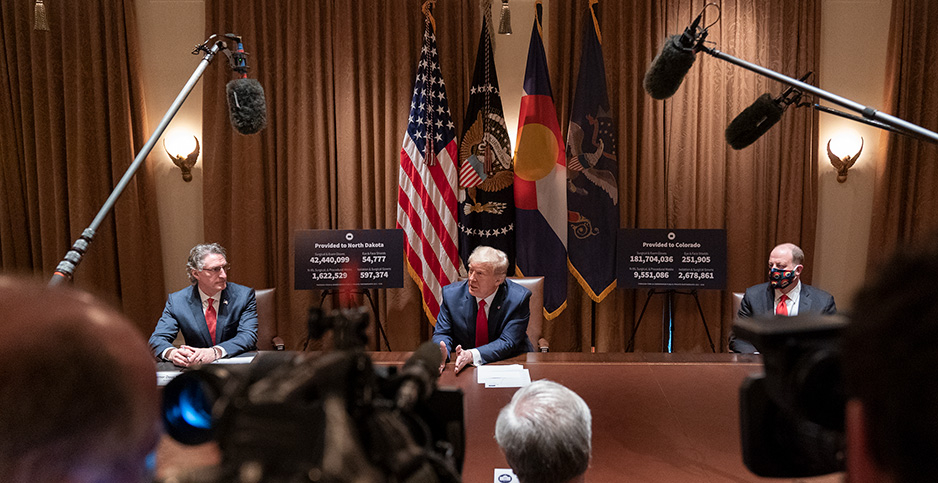 Idle planes on the runway. Poor Americans under duress. Energy workers in the unemployment line.

For more than a year, that was the bleak future President Trump painted for America if the Green New Deal went into effect.

Now those predictions have came true. Not because of the Green New Deal, but because of the novel coronavirus pandemic — a scourge that critics say Trump didn’t do enough to prepare for.

The irony, perhaps, hasn’t been lost on the nation’s 45th president. Trump largely has refrained from repeating his dim view of the Green New Deal since COVID-19 took root in the United States.

Take Trump’s trip last week to Pennsylvania, where the fracking industry is dominant.

He didn’t once mention oil and gas drilling. Nor did he discuss it in a series of media interviews — despite his campaign’s plans to attack former Vice President Joe Biden in Pennsylvania on that very issue.

"Donald Trump has the ability to change the conversation whenever he wants to," he said.

But the president faces a political risk if he reminds voters of energy job losses and airline travel restrictions, Heye said. That calculus only changes if the virus recedes by fall, and Trump can twist the pandemic conditions into a Green New Deal horror story, he added.

"If we’re able to get back to a place where air travel and things like that are normal again and we’re having a normal economy, the energy industry is rebounding, then that becomes a much more salient thing for him to talk about," Heye said.

Since the Green New Deal was announced, Trump has repeatedly said that it would be a centerpiece of his attacks on the Democratic presidential candidate, no matter who it was.

At a GOP dinner in Baltimore last year, Trump even warned his fellow Republicans not to criticize their colleagues on the other side of the aisle over the Green New Deal because he wanted the plan to take root in the Democratic Party.

"Don’t criticize it too much, please," he told the audience, which snickered, "because one thing I’ve learned about politics: You can say something one day that’s just absolutely insane … and then about two weeks later, say the exact opposite, and no one will ever call you on it.

"So I want to bring them way down the pike before we start criticizing the Green New Deal," he said.

The Green New Deal, introduced in February 2019, is a broad-based set of policy prescriptions that would significantly expand clean energy jobs while transitioning the country off fossil fuels.

In the last couple of months, however, few energy jobs have stayed safe. They’ve been slashed across the country, in fossil fuel production as well as green energy.

An estimated 600,000 clean energy jobs have been lost in the United States, according to the advocacy group Environmental Entrepreneurs. Oil and gas drilling and refining lost 51,000 jobs in March alone, according to the BW Research Partnership.

That number is expected to grow significantly as consumer demand stays low for the foreseeable future. Some estimates have projected that total job losses, including the ancillary and support services for the industry, could top 1 million.

Trump and other Republicans have spent more than a year using energy job losses to attack the Green New Deal. They falsely claimed it would prevent Americans from eating hamburgers or flying on airplanes.

They also knocked the potential cost of reshaping society around the Green New Deal. But in response to the pandemic, Trump and Congress have disbursed more than $3 trillion in taxpayer funds. Economists say trillions more in spending is necessary to ward off another Great Depression.

Now, with only a few months until Election Day, it’s unclear how large a role the Green New Deal will play in Trump’s reelection campaign.

When he stopped at a Pennsylvania medical supply distributor last week, Trump didn’t even touch on hydraulic fracturing or the Green New Deal. That’s a significant departure from the past years, when Trump envisioned the Green New Deal as one of the most powerful cudgels he could wield against Democrats.

"You look at this Green New Deal — it’s the most preposterous thing," Trump said in a March 2019 interview with Fox Business. "Now, I don’t want to knock it too much right now, because I really hope they keep going forward with it, frankly, because I think it’s going to be very easy to beat."

The president was not able to restrain himself — at least until the coronavirus hit. In the months following that interview, he frequently brought up the Green New Deal, treating it both as a joke and a gateway to an American dystopia — albeit one that has become a reality in the final months of his first term.

"It’ll kill millions of jobs," Trump said of the Green New Deal in a July speech at the White House designed to showcase his environmental policy. "It’ll crush the dreams of the poorest Americans and disproportionately harm minority communities. I will not stand for it."

Minority communities have disproportionately faced higher death rates and joblessness in the last two months. Nationally, 40% of households making $40,000 or less are out of work, according to a Federal Reserve survey released last week.

Earlier this year, Trump told supporters in Iowa that the Green New Deal would "destroy" cows as well as their livelihoods and livestock.

Due to the coronavirus, cow, pig and other livestock carcasses are rotting in fields across the country because of disruptions to the food supply chain. Meanwhile, meatpacking plants in Iowa and other places have become a vector for outbreaks — killing workers forced to go back to the slaughterhouses.

The situation could be taking a political toll on the president. Trump is only up 2 points on Biden in Iowa, according to a poll from Public Policy Polling released earlier this month.

Aviation is another area that Trump predicted would suffer under the Green New Deal but instead has been ravaged by the coronavirus pandemic.

The Green New Deal "would shut down a little thing called air travel," Trump said at a Texas rally shortly after the Green New Deal proposal was released. "How do you take a train to Europe?"

Air travel to Europe is just beginning to cautiously reopen — though tickets are far more expensive now than before the pandemic. In addition, Americans traveling to some European countries will have to quarantine for two weeks or face large fines. Meanwhile, a number of airlines around the world are asking for taxpayer support to stave off bankruptcy.

Despite the potential drawbacks, one political analyst said it’s possible that Trump could return to the Green New Deal during the campaign. But he would have to commit hard to that strategy. And even then, it’s not certain to work.

The areas where energy workers are out of jobs have been trending away from Democrats for decades, so an anti-Green New Deal message won’t carry the same weight, said Kyle Kondik, managing editor of Sabato’s Crystal Ball at the University of Virginia Center for Politics.

To get beyond the public’s perception of the coronavirus response, Republicans would need to focus on a limited set of core issues, he said.

"The public health crisis is going to put a lot of issues on the backburner," Kondik wrote in an emailed response to questions. "Dedicated messaging, and a dedicated messenger, is going to be needed to cut through bigger issues of the coronavirus and the economy more broadly."