Virus response excludes climate. Get used to it 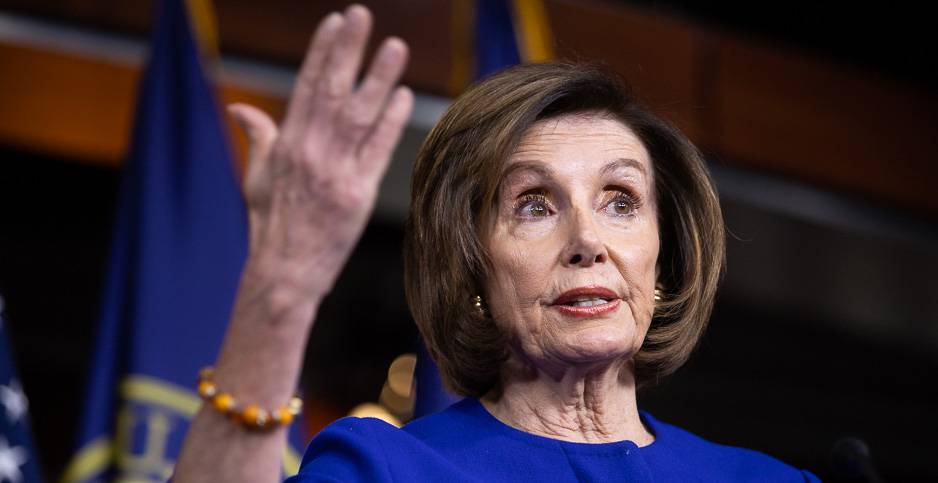 Democratic lawmakers, including House Speaker Nancy Pelosi of California, may have to temper their plans for expansive climate spending amid the coronavirus response, say activists and analysts. Francis Chung/E&E News

Climate is getting left behind in Congress’ multitrillion-dollar spending spree, and it could stay that way for a while.

After some early agitation for Democrats to muscle clean energy policies into the coronavirus response packages, the landscape has shifted. The deepening nature of the pandemic, and its attendant economic collapse, has crowded out climate — at least for the immediate future.

House Democrats have mostly stopped insisting that emergency relief bills address climate. Renewable energy industries, once poised for a banner year, are now just trying to hold on to what they have rather than push lawmakers for more.

A dozen sources from Capitol Hill, industry and advocacy said that climate policy still can survive exclusion from these initial relief packages. Once lawmakers have addressed the unfolding pandemic, they said, climate policy could more easily find a place in economic stimulus bills.

But some are worried the size and difficulty of the emergency relief packages may carry a heavy cost for Democrats: The more they have to fight Republicans over medical spending and oversight, the less leverage they have to fight for big-ticket climate programs.

After failing to include emissions policies in the last $2 trillion coronavirus package, House Speaker Nancy Pelosi (D-Calif.) retreated from demanding the next package include infrastructure.

Some sources described the withdrawal as an indication of what Democrats lose from "asymmetrical warfare" in which Republicans treat health care aid as a concession.

"If the choice is you could either help hospital workers or you could get climate legislation — but you can’t get both — they’re going to pick the hospitals every time. And rightfully so, that’s the right answer," said Brett Hartl, government affairs director for the Center for Biological Diversity.

Money isn’t the problem. Greens and Democrats say they aren’t worried that a 13-figure price tag for coronavirus relief will crowd out billions or trillions more in climate spending. The government can borrow money with near-zero interest rates, and there’s the belief that Democrats feel more emboldened to deficit spend after Republicans in 2017 enacted a $1.5 trillion tax cut.

A bigger concern is how Democrats can insist on cutting emissions without appearing to stall economic recovery.

It doesn’t seem as if anyone in Democratic leadership is using this crisis to advance climate, one Democratic Hill staffer said.

Part of that is because Democrats are busy promoting priorities like hospitals and state agencies. But even so, there’s no climate plan waiting for lawmakers to pick off the shelf, the staffer said, and Democrats don’t want to risk blowback for slowing relief programs over a climate fight they’d likely lose.

"At the end of the day, I don’t think this is about climate politics for [Pelosi]," the staffer said. "She’s not magically keeping her powder dry until the perfect moment. If [climate] were her priority, she would’ve said something."

Others were more optimistic that climate measures — especially infrastructure adaptation — could make it into future legislation.

"I have learned to never count Nancy Pelosi out — but yes, political capital is finite," a second Democratic staffer said. "She’s the fire chief right now, and she’s trying to put out the fire. And when it comes to rebuilding the house, she’s going to want to do that in the smartest way possible."

Industry and congressional sources from across the political spectrum say all energy is going toward halting more damage; recovery packages that could benefit the climate might be a long way off.

The Solar Energy Industries Association, which has raised the alarm about losing half its 240,000-person workforce to the downturn, has focused its efforts on tweaking the investment tax credit for solar projects. The group is pushing for an extension for delayed projects and direct payments to developers, who are now having difficulty accessing tax equity markets.

Renewables are in a stronger political position today than in previous downturns for the simple reason they employ more people. Some 360,000 people work in wind and solar alone, according to the Department of Energy. An additional 2.4 million are employed in energy efficiency. By comparison, about 185,000 people work in the mining, shipping and burning of coal. That makes renewables an easier sell as part of a wider jobs package.

"If we’re going to make those investments, we should do so in a way that not only boosts the economy, but also deliver real additional benefits across the country, including improved employment opportunities, cleaner air and water, and more climate-resilient infrastructure," said Jesse Jenkins, a professor who studies climate and energy systems at Princeton University.

"We know the infrastructure we have now and the energy system we have going into this crisis is not adequate. It is not resilient to climate disasters, and it produces far more greenhouse gases than we want as a society."

But, he added, there are real risks for Democrats in pushing for a green stimulus during a health pandemic.

"If you’re wondering where you’re going to get your next paycheck or make your mortgage payment, how do you get people to care about climate change?" he asked.

Key differences separate economic stimulus efforts, which would be important for climate, from the kind of emergency relief that’s happening now, said Paul Bledsoe, a former Clinton White House climate aide who is now a strategic adviser at the Progressive Policy Institute.

"Right now, we’re just infusing straight cash into the system. We’re not building anything. We’re just keeping our current system afloat. We haven’t even begun the phase of true economic recovery and stimulus," he said. Despite the pandemic, he added, the 2020 elections might prolong Washington’s pivot to stimulus.

So far, the coronavirus response package included some general programs the clean energy industry can tap into. But sector-specific help for wind or solar likely would be harder to pass through the Senate.

There’s a long runway for clean energy programs to land outside the emergency response bills, said one Democratic staffer. After the public health crisis abates, attention will turn to stimulus. That’s a better fit for boosting clean energy sectors.

Additionally, the staffer said, Democrats can still turn to the appropriations process, where they have a more successful history of boosting renewables — even during unified Republican control of government.

Reauthorization of the Fixing America’s Surface Transportation Act, the five-year highway authorization bill, could be another way for Democrats to boost climate in the pandemic’s wake, said Blake Androff, a former Pelosi aide who is now an executive vice president at the Signal Group.

Climate-related infrastructure spending might be in play eventually. But Republicans will resist any lasting policy changes, especially in energy. And in the middle of an economic crisis, any stimulus spending would have to quickly yield benefits, a Republican Hill staffer said. Investments that take years to pay off will be a tougher sell.

Some observers said they were optimistic Congress would act in 2020. The pressure for lawmakers to stimulate the economy will only grow the longer the downturn lasts. At the same time, sizable spending packages designed to soften the virus’s blow have changed the optics around large public expenditures, they said.

"I think it has been hard to get agreement on spending money on infrastructure," said Rob Gramlich, president of Grid Strategies LLC, a consulting firm that advocates for transmission investments. "But if we need to spend money to jump-start the economy, and both sides are willing to spend some money to do that, perhaps we can do the infrastructure work that both sides say they support doing. Maybe the current crisis has shifted the political dynamic for things that weren’t possible before."

She said lawmakers should push for clean energy provisions today, seeding the ground for the industry to rebound when the economy switches on again and giving Biden more latitude to finance clean energy initiatives if he wins.

"What do we want the world to look like when we come back? Do we want those emissions to come back?" Hamilton asked. "Let’s put some provisions in place to get it right."