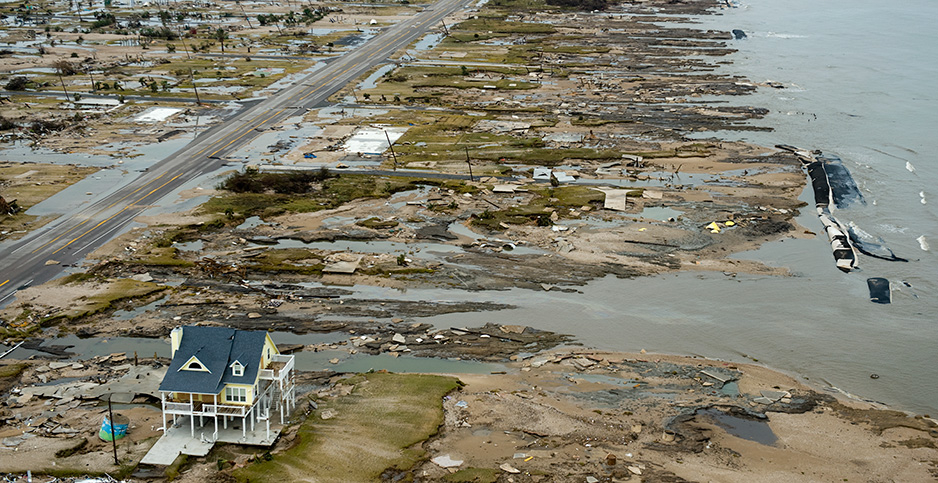 A single house withstood the force of Hurricane Ike when it swept into Gilchrest, Texas, in 2008. The novel coronavirus pandemic could result in more federal funding for disaster mitigation. Smiley N. Pool/Rapport Press/Newscom

The potential windfall, which could kick-start disaster mitigation, is an odd result of two unrelated events: President Trump’s recent decision to declare every state a "major disaster" because of COVID-19 and a 2018 law that requires a percentage of disaster funds to be spent on projects that mitigate hazards.

The law was expected to generate about $500 million annually for states to use on projects such as removing buildings from flood zones, strengthening local construction codes and thinning forests.

Now that figure could be several billion dollars because federal spending is likely to skyrocket after Trump made every state eligible for disaster relief as the pandemic spreads.

"I would expect the [mitigation] program to receive a significant influx of funding as a result of the unprecedented major disaster declarations," said Joel Scata of the Natural Resources Defense Council.

As climate change intensifies storms and flooding, hazard mitigation "is sorely needed for the United States given the amount of disasters we’re experiencing now and will experience in the future," Scata said. "We spend so much money on disaster recovery when we should be spending that on disaster mitigation."

The influx of mitigation dollars could be so large that some worry it will overwhelm states, leaving them unable to effectively use the windfall.

"On balance it is very good news. However, I do think there are some potential pitfalls and red flags that we better be thinking about now before we’re having to deal with having $2 billion to $4 billion on the streets," said Chad Berginnis, executive director of the Association of State Floodplain Managers. "I do worry about our capacity to handle that significant influx of money all at one time."

Berginnis noted that the Department of Housing and Urban Development was significantly delayed when allocating $28 billion it received from Congress in 2017 and 2018 to help places such as Puerto Rico, Florida and Texas recover from devastating hurricanes.

"You didn’t have the capacity at HUD to effectively get that money out," Berginnis said. "When you get that big windfall, can the system handle that?"

Berginnis added that there’s "a lot of uncertainty now" about the program and its funding.

The Federal Emergency Management Agency is in the process of creating a program envisioned in the 2018 law that will distribute the hazard-mitigation money to states. FEMA calls the program Building Resilient Infrastructure and Communities, or BRIC.

In a proposed policy released Friday, FEMA said BRIC will fund projects that "increase resilience and public safety" and reduce deaths, injuries and property damage from natural disasters. States and municipalities also can use the BRIC money to adopt and enforce new construction codes, which will make buildings better able to withstand flooding and heavy winds.

"That would have a significant impact on making sure we’re prepared for future disasters," NRDC’s Scata said of building codes.

FEMA did not answer questions from E&E News yesterday about how funding for BRIC would be affected by the COVID-19 pandemic and the likely surge in disaster spending. The agency expects to start accepting grant applications in the fall.

The 2018 law, called the Disaster Recovery Reform Act, sought to reduce the nation’s vulnerability to natural disasters and to make FEMA aid programs easier to navigate. The law was enacted after hurricanes Harvey, Irma and Maria in 2017 killed an estimated 3,200 people and caused $280 billion in damage.

A key provision allows a president to put 6% of the money that FEMA spends on each major disaster into a special account that funds resilience projects against natural disasters.

With FEMA spending between $7 billion and $10 billion a year on disasters, Administrator Peter Gaynor estimated last year that the account would receive $400 million to $600 million annually. That would be a substantial increase from previous FEMA programs that have allocated roughly $50 million a year to disaster resilience.

But now it appears likely that the resilience program will have billions of dollars because Trump took the unprecedented step of declaring every state a major disaster, making them eligible for FEMA aid to offset some costs related to COVID-19.

It won’t be known for months how much money FEMA will give states in disaster aid.

But a FEMA report published last week shows that in March the agency approved $3.1 billion in disaster aid for states dealing with COVID-19. Most of that money went to California and New York — two states that were hit hardest by the pandemic last month — to reimburse 75% of their emergency costs related to the pandemic.