Vistra CEO on markets: ‘This is a fight we must win’ 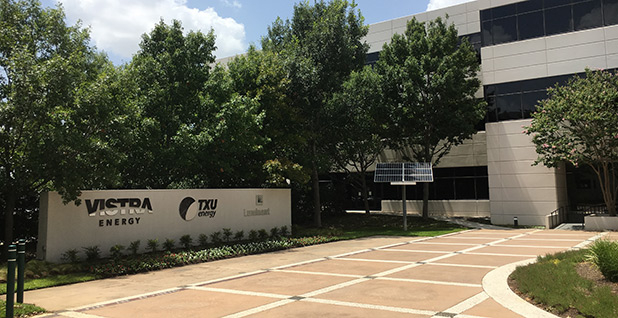 Consider Vistra Energy Corp. ready for a high-stakes debate about U.S. power markets and the role of government.

Morgan’s comments came during a webcast of Vistra’s analyst day as the Texas-based power company laid out plans for its retail and generation businesses. The meeting drifted at times toward market and policy dilemmas, especially given the potential for the Department of Energy to try to help ailing coal- and nuclear-fueled power plants. A recently leaked memo has stirred talk of possible use of the Defense Production Act and the Federal Power Act (Greenwire, June 1).

Vistra is listed online as a member of the Electric Power Supply Association, which says it "has long focused on achieving and maintaining well-functioning and properly regulated competitive wholesale electricity markets."

Referring to the DOE memo, Morgan said it’s ill-conceived: "We are against it even though we have coal. We think it’s wrong for markets. We understand it’s picking winners and losers."

The Vistra CEO said the plan doesn’t focus on the most fundamental national security issue related to energy infrastructure, which he said is transmission. Above-ground lines provide an obvious choice, he said, not underground pipelines.

Morgan pondered the potential implementation of what’s being discussed and called it "almost impossible," saying it would be "incredibly messy."

"Now, we have a president that is committed to follow through on his campaign promises and so we’ll see," Morgan said, adding, "You can expect us to play a very strong role."

Sen. Lisa Murkowski (R-Alaska) was quoted in a news release yesterday about a Senate committee hearing she led. The hearing featured questions related to retirements of plants fueled by nuclear and coal.

"I have my concerns with the steps the Department of Energy is reported to be considering, but also recognize they are trying to fill a perceived vacuum," Murkowski said, according to the release. "In my view, FERC should be pointing the way on policy improvements that address grid vulnerabilities, while reaffirming our commitment to competition in wholesale power markets."

She added: "I have been concerned about this issue for years now, and find it unfortunate that prior Commissions did not lead more effectively."

Vistra swallowed up Dynegy Inc. earlier this year and the combined company’s key wholesale markets include ones managed by the Electric Reliability Council of Texas, PJM Interconnection and ISO New England. Morgan suggested the ERCOT market could be pretty robust for a while, with 2019 perhaps tighter than this year. The company is hoping for positive momentum in the other two markets.

Morgan pointed to potential support of a New England power station as troubling, and he expressed hope for some mitigation related to the capacity market (Energywire, May 22).

Morgan suggested Vistra would look to shrink its conventional generation before it would look to grow it. It’s possible that New York and California could be places where Vistra might look to shed assets. Morgan has said Vistra’s coal-fueled holdings in Illinois were "challenged" and could see some retirements.

Various factors could affect Vistra’s Illinois assets, including a possible change related to a multipollutant standard. One option under consideration, Vistra said yesterday, is to try to move Zone 4 in the region managed by the Midcontinent Independent System Operator to PJM. The reason for the proposal is that MISO has a heavy regulated utility flavor and a smaller competitive element. But the shift, which would affect southern Illinois, has been floated before and will see pushback.

"We are aware of the ongoing discussions. We don’t have anything conclusive to share at this point," Susan Buehler, a PJM spokeswoman, said via email. "I would point out that PJM’s forward capacity market ensures reliability through capacity pricing."

MISO, in a statement today, said it has continued to provide "significant value to our members across the footprint."

"In Illinois, power consumers have enjoyed low wholesale energy and capacity prices through the MISO market," MISO said, adding that it will work with states and members on the design of long-term resource adequacy processes. "MISO is able to accommodate state policy mechanisms that Illinois may wish to pursue."

Vistra told analysts and investors that it has a relatively stable earnings profile with multi-year visibility and plans to be disciplined financially. It called renewables and batteries an opportunity instead of a threat. Vistra shares rose 11 cents in regular trading yesterday to $24.20.

Interest from oil and gas?

Also yesterday, Vistra discussed the authorization of a $500 million share repurchase program, saying more capital could be allocated in the future for options such as a recurring dividend, share buybacks and growth opportunities. The company said it could have over $6 billion of capital available for allocation through the end of 2022 after certain debt payments.

Vistra also has an eye on emerging technologies, though it indicated battery storage investments may be modest for now as battery penetration is projected to be low in the next 10 years. The company did disclose a planned 10-megawatt battery storage project located adjacent to the Upton 2 solar facility in West Texas. Vistra also noted the potential for batteries at sites in California.

Yesterday also saw time for a wider discussion of the energy sector, thanks in part to comments during the analyst day by Angie Storozynski, managing director with Macquarie Capital (USA) Inc.

She noted strong electric retail margins but said oil and gas companies are "pretty much realizing that the peak usage of oil is coming," meaning they’ll need to "replenish" their business model. Such companies know how to trade commodities and have big balance sheets, Storozynski said.

"Why wouldn’t they enter the energy or electricity trading market and actually go after retail customers?" she asked. "And so if that were the case, and we’re hearing that some of the oil and gas companies already have plans like that, isn’t that a sign that we are being at peak in the retail margins on the electricity side?"

Storozynski suggested a way to combat margin compression could be growth in the customer base.

Morgan pointed to a strong earnings metric for Vistra’s retail business and said predictions of falling margins hadn’t come true. He noted that the main Texas power market isn’t a national or international play, so that might not be of interest to certain big names. Companies also might want to own generation to go with a certain retail size.

"I will tell you this, though: I actually predict one day with electrification of transport and with the prospect of diminishing usage of petroleum products, that with the big balance sheets of the major oils that they may turn to this sector at some point in time," Morgan said.

The Vistra CEO said he’d be OK with that.

"They could write a big check," Morgan said, adding: "I don’t see anybody else buying us, but they could do it."