Vogtle costs too much for customers to bear, PSC staff says 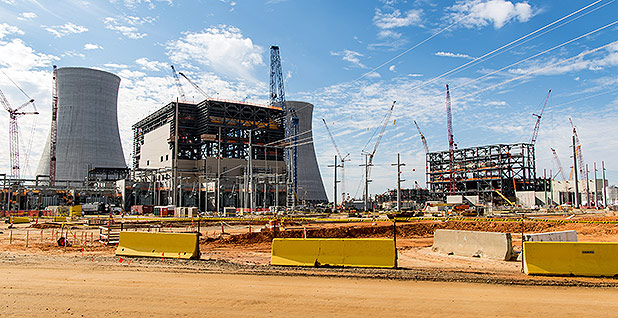 Staff for the Georgia Public Service Commission says rising costs at Plant Vogtle are becoming too much for customers to bear. Georgia Power Co.

ATLANTA — Members of the Georgia Public Service Commission staff say the Plant Vogtle nuclear expansion project is too costly to finish unless state utility regulators tell Georgia Power and its parent, Southern Co., to absorb some of the skyrocketing costs.

In a strongly worded document filed with the PSC last Friday, the PSC staff said Georgia Power’s now $12.2 billion projected costs for its 45.7 percent share of the project are too much for customers to bear. The commission must take steps to ensure that the reactors — now the only ones in the nation that are under construction — make economic sense to finish, or they should cancel the project, staff said.

Vogtle’s future has been hanging in the balance since late March, when its main contractor, Westinghouse Electric Co. LLC, went bankrupt. The project was already years behind schedule and billions of dollars above its forecast budget, and Georgia Power’s analysis has added time and money to that.

The PSC staff and its consultants have routinely warned that Vogtle’s economics will continue to deteriorate the longer it takes to finish the reactors. Friday’s document is perhaps the most sharply worded criticism about the project since regulators have been reviewing the project’s cost and schedule.

They, along with Vogtle’s main analyst and independent monitor, and other stakeholders filed testimony last Friday.

Georgia Power has routinely argued that the delays and cost increases at Vogtle are not the company’s fault. Indeed, Vogtle’s schedule changes stem mostly from increased federal safety standards and a series of contractor problems.

Staff, however, attacked Georgia Power’s management of Vogtle and its contractors, specifically Westinghouse.

"The company’s failure to manage the project in a reasonable manner resulted in repeated schedule delays and increases in actual and projected costs," they wrote, later adding, "It is unreasonable for ratepayers to have to bear increased costs as a result of the units not being constructed efficiently."

To be clear, no nuclear project in U.S. history has been built on time and on budget, largely because they must meet strict safety and regulatory standards. It is a key reason why no one has built a nuclear project from scratch in nearly three decades.

The PSC is reviewing the money that Georgia Power has spent over the last six months while weighing the project’s future. Regulators have scheduled a vote for early February unless other outside issues come into play.

Georgia Power spokesman Jacob Hawkins said the electric company is reviewing the testimony and will discuss any areas of disagreement during upcoming hearings.

"We remain confident that the unified recommendation to move forward with construction represents the best choice for customers while preserving the benefits of a new carbon-free energy source for our state," Hawkins said in a statement. "We also understand that this is a complex and difficult decision and it is ultimately the decision of the Georgia PSC on whether or not we will move forward with the Vogtle project."

Vogtle is the epitome of politics clashing with economics. The project’s total cost now stands at roughly $23 billion, up from $14 billion in 2008. Georgia Power and the public power companies building Vogtle have told the PSC to let Georgia Power recoup all of Vogtle’s new costs from customers.

If that doesn’t happen, any of the co-owners can pull out of Vogtle, and the project will fail.

Like many other states, Georgia is also heading into a legislative session and an election year. Gov. Nathan Deal (R) and the five-member commission have been staunch supporters of Vogtle, and there is strong political pressure to keep the reactors going.

Two sitting utility regulators are up for re-election, but one of them, current Chairman Stan Wise, has decided not to run again and in fact will likely step down after the scheduled February vote. This will give time for Georgia’s governor to appoint a successor before the March qualifying period, giving that person a leg up as an incumbent on the fall ballot.

Georgia Power and the PSC argue that the reactors would give the state emission-free electricity for a much as 80 years. The utility also said finishing Vogtle is more economical when stacked up against building a natural gas power plant, which it would have to build from scratch, or other options.

In any case, the utility would have to add more generation to the power grid by 2024.

The PSC staff members agreed that more generation will be needed but picked apart Georgia Power’s economic modeling. Broadly, they argued that the utility either changed, added or left out certain variables to make it look like finishing the multibillion-dollar reactors was the best option in the long run.

Almost every economic scenario has changed now that Vogtle is years behind schedule. Southern’s nuclear unit is now the main contractor, and the new working arrangements with contractor Bechtel Corp. and Westinghouse shift the financial risk onto the utilities and their customers.

Natural gas prices have fallen significantly, and carbon regulations have come and gone.

"Without these economic cornerstones, the economic rationale for the units is diminished," the PSC staff wrote.

The delays also have put federal production tax credits in jeopardy unless Congress extends them, makes Georgia Power no longer eligible for bonus tax depreciation and gets the company caught up in federal tax reform that could hinder the reactor’s financial picture.

It’s also unclear whether Westinghouse’s parent, Toshiba Corp., will make good on all of its monthly payments to underwrite $3.7 billion of the project and whether the Energy Department will approve a conditional loan guarantee.

Georgia Power argues it shouldn’t be held responsible if it doesn’t secure Toshiba’s payments and if Congress doesn’t extend the production tax credits. Vogtle should be finished anyway, and customers should pay those costs, the company says.

PSC staff disagrees and argues that the commission should review Georgia Power’s role in not obtaining those monetary benefits.

While Georgia Power’s customers could wind up paying more to finish Vogtle, the utility will reap considerable financial benefits from the project’s delays, PSC staff pointed out. Georgia Power will collect roughly $12.6 billion in profits over Vogtle’s entire life span, up from the $7.4 billion it planned to get if the reactors started producing electricity in 2016 and 2017.