Vogtle owner asks DOE for $1.6B more to finish project 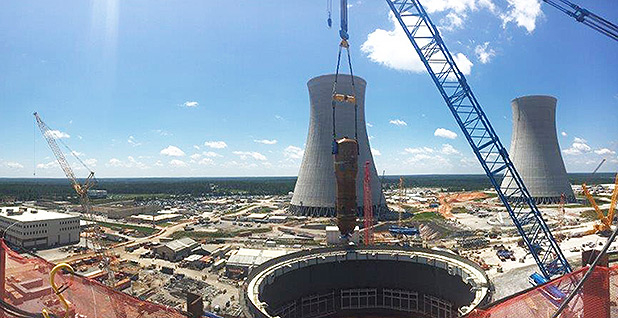 Construction on Plant Vogtle's expansion is seen from the top of the Unit 3 turbine building in this August photo. Georgia Power

Oglethorpe Power Corp., the second-largest partner in Georgia Power’s nuclear expansion project, has asked the Department of Energy for as much as $1.6 billion in additional support to help finish the reactors, utility executives said yesterday.

The money will help cushion the blow of an increased budget used to pay for two reactors at Plant Vogtle, already years behind schedule and billions above their original forecast amount. Oglethorpe, a 30 percent owner in the project, already has a $3 billion loan guarantee from the Energy Department.

It has drawn on $1.7 billion of that amount.

Oglethorpe, which serves 38 member cooperatives, is one of the public power companies involved in building the reactors at Vogtle in southeast Georgia. Its request to the Energy Department is one of several last-minute moves the utility owners are making in efforts to lower the project’s overall price tag, which could top $20 billion, based on estimates from two of the utility owners.

"The DOE has been extremely professional and supportive over the last several months and has worked tirelessly with us and the other owners that are also DOE borrowers," Betsy Higgins, Oglethorpe’s chief financial officer, said during a quarterly investors presentation yesterday morning.

Vogtle’s future has been in flux since its main contractor, Westinghouse Electric Co. LLC, filed for Chapter 11 bankruptcy protection in March. Westinghouse’s bankruptcy stemmed from significant cost increases at Vogtle and a nuclear project in South Carolina.

The electric companies in Georgia and South Carolina analyzed how much it would cost to finish their reactors. In South Carolina, Scana Corp.’s South Carolina Electric & Gas Co. and state-owned Santee Cooper decided that the amount would be too much for their customers to bear and have abandoned their project.

South Carolina’s governor, Legislature and utility regulators have sharply criticized the utilities for their decision, accusing them of charging their customers billions for reactors that won’t produce electricity.

The backlash has reached the point that the state House speaker has asked South Carolina’s longtime utility consumer advocate to quit, and there is speculation that Santee Cooper’s CEO will be forced to resign at a special board meeting today, according to multiple media reports.

For Vogtle, regulators, analysts and other stakeholders are waiting for Georgia Power to reveal its highly anticipated final analysis of how much it would take to finish the reactors, as well as to cancel them. A public version of that report is due out next week.

Georgia Power has a 45.7 percent share of Vogtle, but its report will contain input from the other co-owners.

"We, as co-owners, have been asked to provide our input to that recommendation prior to their filing, and we believe we can meet that objective," said Oglethorpe CEO Michael Smith. "We continue to be in frequent contact with [Georgia Power] regarding this recommendation and on the project overall."

Oglethorpe, the Municipal Electric Authority of Georgia and Dalton Utilities have their own boards or set of independent decisionmakers, but none has revealed whether they have decided to go forward with the project.

Oglethorpe will need to increase its original $5 billion budget to a range of $6.5 billion to $7.3 billion, including a contingency amount, according to a Securities and Exchange Commission filing. This amount covers a combination of construction and financing costs, Smith said yesterday.

Southern Co., Georgia Power’s parent, has given a range of $6.7 billion to $7.4 billion in capital costs alone. Oglethorpe’s and Southern’s figures are offset by billions that Westinghouse’s parent, Toshiba Corp., has agreed to pay to underwrite Vogtle.

Without that infusion, Georgia Power’s capital costs for Vogtle will increase to $8.4 billion to $9.1 billion.

DOE has already agreed to back $8.3 billion in loans to Vogtle. Georgia Power is also working with the agency to increase the amount of federal support.

"We are working to keep all options open for customers," Georgia Power spokesman Jacob Hawkins said.

DOE visitor logs obtained under the Freedom of Information Act show Southern’s CEO at the agency roughly six times between February and July, including three visits in June.

The utilities negotiated a new working arrangement with Westinghouse that includes making Southern’s nuclear unit and Georgia Power the main contractors at Vogtle. DOE approved the new agreement in July and amended the loan terms along with it, "given the Westinghouse bankruptcy and the disruption on the project," Higgins said.

This includes suspending any advances to the utilities until they have finished their cost assessments and decided whether to finish Vogtle.

As with the other utilities, Oglethorpe’s executives were careful not to reveal where they stand on the project. Smith praised Southern Nuclear’s experience in operating nuclear reactors. He also said that Oglethorpe is planning conservatively around the higher end of its economic forecast given that there’s no longer a fixed-price contract.

"We, and the other owners of the project, are carefully evaluating the cost estimates of the project as well as thoughtfully considering the other factors that influence the decision to go forward or not," Smith said.

Those factors include that nuclear will provide carbon-free baseload power for decades. Smith said taking a longer view will be beneficial when comparing nuclear with cheaper sources of power, such as natural gas.

"For some, it’s hard to maintain this long-term focus when the short-term outlook is for natural gas prices, which when used in a combined-cycle plant can produce electricity at an all-in price, which is much less than the projected cost of new nuclear," he said.

The boards for Southern and Georgia Power also must sign off on the project at some point. A Westinghouse company email obtained by E&E News said that Southern Nuclear’s board did not announce a decision on Vogtle’s reactors on Wednesday as expected.

"As stated in my recent emails to you, today is the date Southern Nuclear Co. board of directors intended to vote on the future of the Vogtle 3 & 4 AP1000 reactor project," CEO José Gutiérrez said.

"We have learned from Southern that they will not be announcing their board of directors’ decision today but will be doing so in the future," the email said. "We continue to await their decision and will share that information once it becomes available."