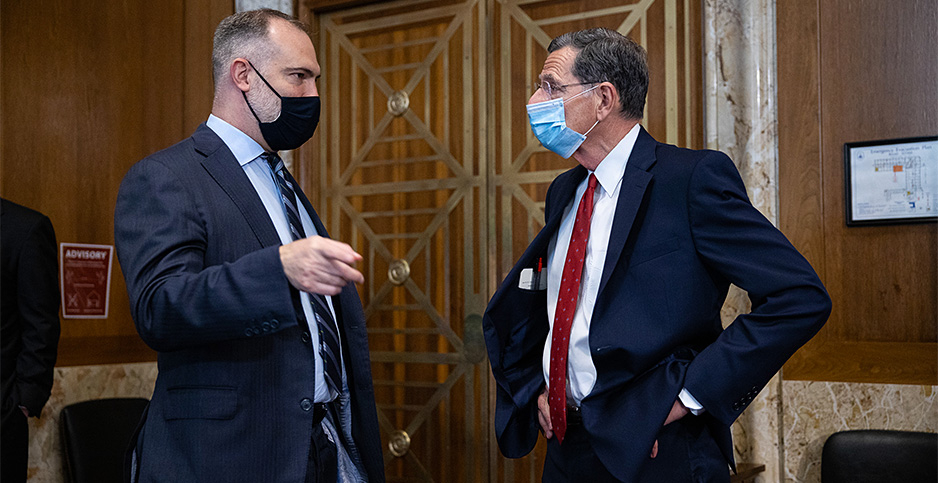 Senate Republicans had grave concerns about Deb Haaland, an unapologetic progressive, being tapped to lead the Interior Department; they are now eying Tracy Stone-Manning, President Biden’s nominee to run the Bureau of Land Management, with similar suspicion.

But when it comes to the nominee for deputy Interior secretary, GOP lawmakers are willing to take their chances on Tommy Beaudreau — even as it remains unclear just how much power any senior official at the federal agency has to make some of the most consequential policy decisions of the moment.

Beaudreau is poised for confirmation this morning, following a procedural vote yesterday to advance his nomination. All but eight Republicans joined one independent and all but two Democrats in support in the 89-9 vote.

Republicans who back Beaudreau have cited his tenure as the director of the Bureau of Ocean Energy Management and the endorsement of Sen. Lisa Murkowski (R-Alaska) as factors working in his favor.

"It is … clear from his nomination hearing that he understands America’s need for an all-of-the-above energy strategy. That strategy must include coal, oil, natural gas, nuclear power and renewables," said Senate Energy and Natural Resources Committee ranking member John Barrasso (R-Wyo.) in floor remarks yesterday. "He can serve as a voice of reason in an administration that is waging a war on American energy workers."

Barrasso also noted that Beaudreau "regularly handled matters relating to the department" as an "attorney in the private sector."

In fact, Beaudreau spent the past several years representing clients in the oil and gas industry at a major global law practice.

Such a background is typically a nonstarter for liberal Democrats, who don’t think government officials should have ties to the industries they are tasked with overseeing and regulating. Beaudreau, however, has mostly glided under the radar, as Democrats chose not to pick a fight with the administration on a lower-tier nominee.

Sen. Bernie Sanders, a Vermont independent who caucuses with Democrats, was the only progressive to oppose Beaudreau yesterday on the cloture vote.

Yet as the fate of the federal oil and gas leasing program remains up in the air, Beaudreau’s resume has largely cemented the GOP’s conviction that he is best positioned to serve as a counterbalance to Haaland, who as a New Mexico Democratic congresswoman widely opposed energy extraction on public lands.

There’s no guarantee, however, that Beaudreau will be the ally to Republicans they hope he will be, as Biden in the first six months of his administration has made it clear he is focused on living up to his campaign promises but also amenable to making concessions when politically expedient.

Sen. James Lankford (R-Okla.) voted to advance Beaudreau’s nomination yesterday but said Haaland made it clear from the start who was running the show at Interior.

"There is a clear signal of where the administration is going, and the concern is that individuals that are being appointed in these different offices going through nominations are really not making any decisions at all," Lankford said. "Somebody in the White House is making all the decisions, and the people at the Cabinet level are purely decorative, they’re filling a spot but really have no authority at all."

On the one hand, Biden has frozen drilling in the Arctic National Wildlife Refuge and halted construction on the Keystone XL pipeline, culminating in the lead project managers canceling the effort for good. In the coming weeks, Biden is expected to reinstate protections for three national monuments the Trump administration scrapped. All these are actions Haaland would have praised as a member of Congress.

At the same time, Biden instructed his administration to defend the Willow project in Alaska — a massive oil project from ConocoPhillips that has long disturbed environmentalists, including Haaland — as a goodwill gesture towards Murkowski, a potential Republican partner in a 50-50 Senate.

Beaudreau’s nomination was itself intended to curry favor with Murkowski and Senate Energy and Natural Resources Chairman Joe Manchin (D-W.Va.), who grumbled that Biden’s original pick for the No. 2 job at Interior, Elizabeth Klein, had a hostility toward fossil fuels.

Beaudreau, who spent formative years in Alaska and worked closely with Murkowski in the Obama-era years, was the senator’s personal choice for the job.

In an interview with E&E News yesterday, Murkowski said that while Biden was currently by and large calling the shots, it wouldn’t necessarily be that way forever. Best, she said, to think strategically about who should be installed in the top positions at the agency that is still being formed.

"This is June, so we are less than six months, really, into an administration that has been stood up. We still have a lot of holes in the team, and so we’re trying to determine who’s in charge," she explained. "I think it’s important to take each one of these very, very seriously because you don’t know. Is this going to be a secretary that defers to the heads of her agencies, or is she going to be the one who is the absolute decider?"

Beaudreau, she said, "knows what goes on within the department. He’s grounded in just kind of the management and operation side of things, as well as the policy side."

Murkowski said she was still considering whether it would be strategic to confirm Stone-Manning, about whom Republicans are largely negative. Stone-Manning spent years working in Montana Democratic politics and campaigned against Sen. Steve Daines (R-Mont.) in his fierce 2020 reelection fight against ex-Gov. Steve Bullock (D), for whom Stone-Manning once worked.

New revelations have since surfaced involving a questionable loan Stone-Manning received when she worked for Sen. Jon Tester (D-Mont.). Her opponents have also recently pointed to a decades-old incident involving a threatening letter she sent to federal authorities on behalf of two tree-spikers who were seeking to prevent logging in the Clearwater National Forest in Idaho.

"There’s no way in hell she should be confirmed," Sen. Dan Sullivan (R-Alaska) said yesterday, a week after saying he was undecided on both Stone-Manning and Beaudreau.

But Sullivan also said last week the latest actions from the Biden administration on ANWR and Keystone would factor into his decisionmaking as he weighed whether to support Beaudreau as well. Yesterday afternoon, he voted against advancing the nominee.

Daines, who has been circumspect about whether he’ll support Stone-Manning, said last week he had confidence Beaudreau would be a positive influence at Interior.

"He’s from Alaska, he grew up in the West, and he understands our issues," said Daines, who was one of the leading opponents during Haaland’s confirmation. "I recognize the challenges we face right now with some of the headwinds in the administration, but I think Tommy Beaudreau is somebody I can talk to and [who] listen[s] to the science and facts."

When reminded that Stone-Manning was a fellow Westerner — a fellow Montanan, at that — Daines would only smile.