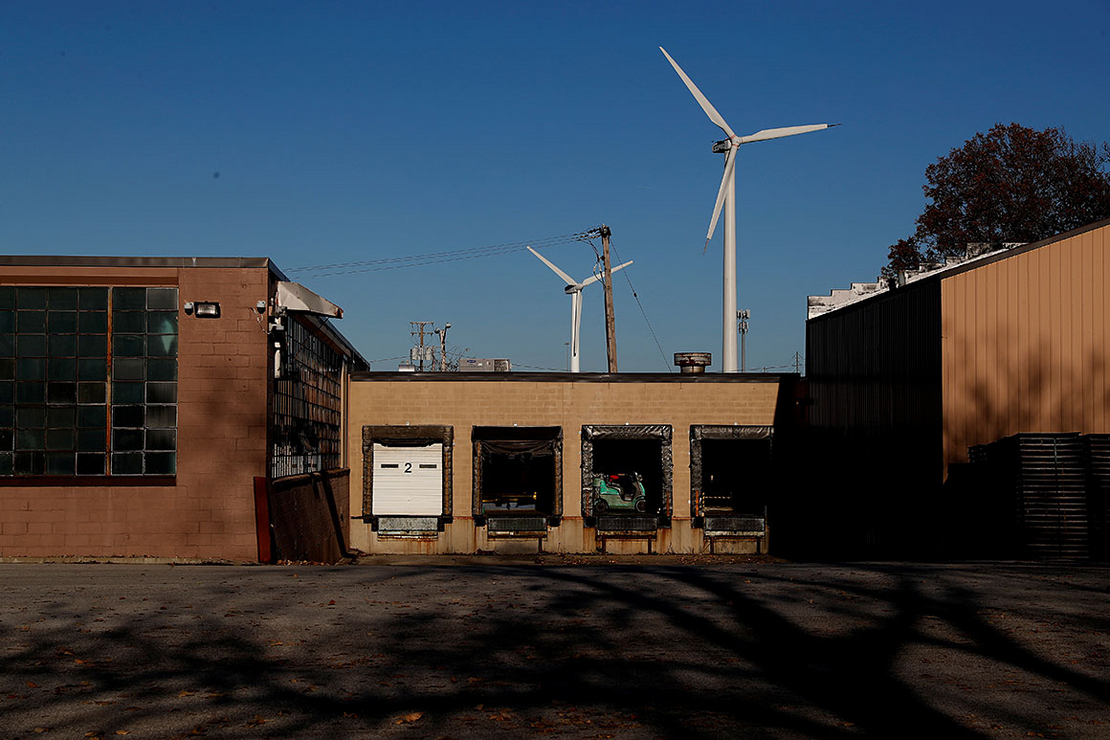 Wind turbines are seen behind a factory in Cleveland in this photo dated Nov. 9, 2020. Wind and solar developers say unfavorable energy policies have stymied renewable energy development in the Buckeye State. Shannon Stapleton/Reuters/Newscom

The battle to control Ohio’s energy mix has been noisy and partisan since 2008, when the Legislature adopted an alternative energy standard.

As the political dust settles, fallout from the passage and repeal of a series of divisive energy bills remains to be seen. At the heart of many of the policies are provisions that will shape the future of wind and solar energy development in the Buckeye State.

The turmoil in Ohio is happening against the backdrop of the growing urgency of President Biden to address climate change and shifting energy markets where the workhorses of the grid — coal and nuclear plants — are struggling to stay viable. But unlike some of its neighbors, which are opening their arms to renewable energy, Ohio’s GOP Legislature has hardly embraced the shift to cleaner energy.

Policy support for renewables has been eroding in Ohio for a decade — the most recent example being a project-siting bill signed by Republican Gov. Mike DeWine last month — and is raising doubts about the long-term future of the wind and solar industries there.

Renewable developers say the policies don’t bode well for Ohio in the long run. Among large energy consuming states, only California imports a larger share of its electricity. And that trend is poised to continue.

“What you’re going to see as a result is that Ohio is less than less an important player in energy in the region, and more and more a buyer of power from surrounding states and those surrounding states are going to see those job and economic development benefits associated with projects,” said Andrew Gohn, director of Eastern state affairs for the Washington-based American Clean Power Association.

EDP Renewables North America, one of the largest U.S. renewable developers, said it’s no coincidence that it has about 100 megawatts of projects either under or near construction in Ohio compared with 10 times that amount, a gigawatt, in neighboring Indiana.

“We certainly are looking and have invested more in other states, because Ohio is such a volatile place to do business,” Amy Kurt, the company’s senior manager of regional government affairs, said in an interview.

While scandal-tainted H.B. 6 in 2019 effectively ended Ohio’s clean energy standards and subsidized nuclear and coal plants, it is two lesser-known policies that most rankle wind and solar companies.

The first is a 2014 provision buried in a budget bill that established among the most restrictive statewide setback requirements for wind projects in the U.S. The law nearly tripled the distance that wind turbines must be set back from property lines. And any turbine located nearer that distance from a neighboring property must get a waiver from the property owner.

Renewable developers say the policy is unnecessarily restrictive and it singles out one technology.

Ohio’s wind setback law requires a minimum of 1,125 feet from the tip of the turbine’s nearest horizontal blade to the nearest adjacent property line. By contrast, the Ohio Department of Natural Resources requires that new oil and natural gas wells and production equipment be at least 100 feet from homes.

The law has all but ended wind energy development in Ohio. Regulators have approved just one new onshore wind project — Apex Clean Energy’s 298-MW Emerson Creek wind farm in northern Ohio — since the setbacks were approved. And compared with neighboring states, relatively few wind projects are seeking to interconnect with the region’s bulk power grid.

Just as the setback law stymied wind, developers fear S.B. 52 — signed by DeWine last month — could similarly hurt the solar energy’s future in Ohio, or at least parts of the state.

The legislation, which passed without a single Democratic vote, gives Ohio counties the power to veto specific projects or make themselves off-limits to renewable energy development altogether. Renewable energy developers must also go to the Ohio Power Siting Board for approval, giving opponents a second chance to kill projects.

Likewise, opponents said the bill singles out renewable energy and doesn’t apply to other energy technology, including oil and gas or even coal.

Renewable energy has been a focus of Ohio’s GOP-dominated Legislature in recent years:

In a statement after the bill passed, sponsors denied the bill would hurt renewable development in Ohio. Instead, they said the measure would “promote partnership and collaboration between project developers and the local community, ensuring that these projects are sited in areas that will support and cherish them.”

S.B. 52 was softened to help it pass. Changes included a provision to grandfather thousands of megawatts of solar projects that have applied to plug into the PJM Interconnection grid.

Only a portion of projects in the PJM queue will be completed, but the amendments will blunt the near-term impact of the law — something for which clean power advocates and developers are grateful.

“The opportunities may be there, but the costs may just be too high to develop in the state for newer developments coming in,” said Bruce Burcat, executive director of the Mid-Atlantic Renewable Energy Coalition.

“The more you raise the costs of development, the more you make it harder to develop, the less likely a project will become viable,” he said.

It’s not just wind and solar developers who are concerned.

S.B. 52 initially drew opposition from business groups such as the Ohio Chamber of Commerce and Ohio Manufacturers’ Association, both of which said the current statewide approach to siting renewable energy projects was best for the state.

The chamber ultimately was neutral on the final bill after amendments that grandfathered existing solar projects and shifted local oversight of projects from Ohio cities and townships to counties.

But the business group, which also opposed Ohio’s wind setback law, said it’s staying true to its belief that an “all of the above” energy policy is right for the state, Kromer said.

Utilities like AEP Ohio likewise have an interest in ensuring energy consumers have access to renewable energy.

Ohio is a deregulated state, so Columbus-based AEP’s local utility is solely a distributor of electricity. Still, access to renewable energy is among the first questions the company gets from technology companies like Amazon.com Inc., Facebook Inc. or Google that are looking to expand there.

“When we talk to them, their first preference in terms of expansion is, first, a reliable electric supply,” Raja Sundararajan, senior vice president for regulatory and customer solutions at AEP Ohio, said in an interview. The next questions is: “Do we have enough renewable resources that they can tap into through our wires so that they can satisfy their clean energy policy.”

For now, the answer is yes. Longer-term? That remains to be seen.

AEP opposed the bill as initially drafted, warning legislators that turning away from the current statewide approach to siting “would inject massive uncertainty into the power generation sector and put Ohio at a disadvantage for attracting capital investment into the state.”

Sundararajan said he gets why legislators wanted to give local communities more control over renewable development and project siting. But if the law limits solar development, it could hinder Ohio’s ability to attract business. Companies across Ohio, no matter what industry, are adopting carbon goals. But especially technology companies.

“If that does happen, then I do see some of the tech companies that are looking at expansion here saying Ohio is probably not the right place to be,” he said.

Sundararajan is reserving judgment on the measure’s ultimate impact. But if the new law results in a lot of new solar development being denied “then I think it’s probably not the right outcome,” he said.

Like AEP, business groups such as the Ohio Chamber of Commerce and Ohio Manufacturers’ Association testified that the current statewide approach to siting renewable energy projects was best for the state.

The chamber believes regulation of energy at the state level is better for business than a patchwork of local policies and that Ohio should make use of all its energy resources, including the wind and sun.

The impact of S.B. 52 won’t immediately be apparent for a couple of years. The law doesn’t take effect until October. Even then, solar projects that were allowed to continue under the existing siting laws will continue to be developed.

In the meantime, renewable advocates are focused on convincing individual counties about the economic benefits of wind and solar projects.

“We are looking to try to make sure that we are educating county commissions, county boards on the benefits of the technology to those communities, and the exact nuances of S.B. 52, with respect to how their authority is impacted over renewable energy projects,” said the American Clean Power Association’s Gohn.

Kurt, of EDP Renewables, is urging Ohio counties not to make themselves off-limits to all renewable energy projects and consider each individually.

“I am really hoping they evaluate each project on its own merits before just putting a big red X on their county to any potential development because that’s really hard to undo,” she said. “Give us a chance to come to your county and build support from the local community and show you the kind of economic development that these projects can bring forward.”