Volkswagen and U.S. EPA have a deal, but no fix 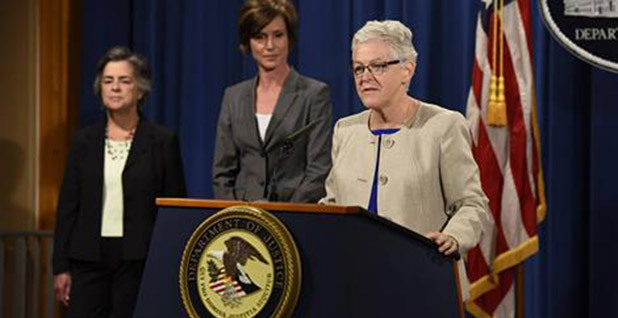 U.S. EPA yesterday announced that Volkswagen AG will pay a $14.7 billion settlement for cheating on emissions tests, but the agency has yet to find a way to fix the technology that led to the scandal.

The proposed deal, which was months in the making and has yet to be approved by a federal judge in California, sets aside $10 billion for compensating drivers. The automaker would have to pay $2.7 billion to an EPA fund that would be divided among states to reduce air pollution from the use of diesel. Another $2 billion would go toward improved access to electric vehicles. The German automaker will also pay $603 million in a separate settlement with 44 states; Washington, D.C.; and Puerto Rico.

Volkswagen would be required to offer drivers either a buyback or a fix to get 85 percent of the polluting cars off the road by June 2019. So far, though, there’s no fix.

When Volkswagen does submit a plan to correct the cars, EPA and the California Air Resources Board, which set emissions standards and test vehicles for compliance, must approve or reject it. EPA Administrator Gina McCarthy said yesterday that could happen within six months. But experts question the delay.

"Throughout this whole thing, my main point has been that I just don’t understand why they can’t find a fix," said John German, the engineer at the International Council on Clean Transportation who helped uncover the so-called defeat devices that allowed Volkswagen cars to emit nitrogen oxides (NOx) at levels 40 times higher than the legal limit.

Even in a buyback program, Volkswagen can’t resell the cars without fixing them, according to the terms of the agreement.

"We are not shipping pollution elsewhere," said McCarthy, who added that the agencies are encouraging the company to scrap or recycle the cars.

A fix for any of the affected models would require eliminating the software that turned off the emissions control during on-road driving and improving the pollution reduction systems themselves.

The settlement covers nearly a half-million 2.0-liter diesel cars, including 2009-15 Volkswagen diesel models of Jettas, Golfs, Beetles and Passats and the Audi A3. The latter two models had pollution control systems similar to those in most other U.S. diesel cars, which use urea injected into exhaust gases ahead of a catalyst to break down NOx. Volkswagen’s Jetta, Golf and Beetle did it a little bit differently, using something called "lean NOx traps," which use fuel as the reactant to break down NOx.

There’s a fundamental trade-off between fuel economy and emissions performance in a diesel engine, said German, so a fix would inevitably decrease fuel economy.

The deal asks Volkswagen to offer a fix that restores NOx emissions performance by roughly 85 to 90 percent. German said that’s a feasible goal.

Fixing the cars would be cheaper for the automaker, which could end up spending less than $10 billion to compensate drivers depending on their choices and their cars. Each buyback could be worth between $12,500 and $44,000, according to the decree. Owners would receive payments of $5,100 to $10,000. Drivers who choose the modification instead would receive partial compensation for Volkswagen’s deceptive advertising under a Federal Trade Commission order.

Environmental advocates praised the settlement. Andrew Linhardt, who works on federal transportation issues for the Sierra Club, said he would prefer that the agencies and the automaker focus on improving access to zero-emissions vehicles rather than on expensive fixes.

"While it’s not our first choice, we understand consumers want the ability to choose," Linhardt said.

"A giant sum of money … will be wasted in attempting to fix cars that cannot all be fixed, and where the fix may be worse than the problem if the cars are crushed well before the end of their useful lives," the letter said.

"The question really is, why we should allow these cars back on our roads again if they’re not at 100 percent of where they should be?" said Mary Nichols, the chairwoman of the California Air Resources Board, at a news conference yesterday.

States will receive between $6.5 million and $318 million, which is California’s allotment, to cut pollution from diesel. Those projects would focus on existing infrastructure, like ports or school buses, similar to the existing Diesel Emissions Reduction Act program.

Another $2 billion would go to promote the use of zero-emissions vehicles in a brand-neutral way, which could include charging stations, education efforts and electrifying large fleets like those used by ride-sharing companies.

Volkswagen this month outlined a strategic shift toward electric vehicles, saying it wants them to make up a quarter of its sales in 2025 (ClimateWire, June 17).