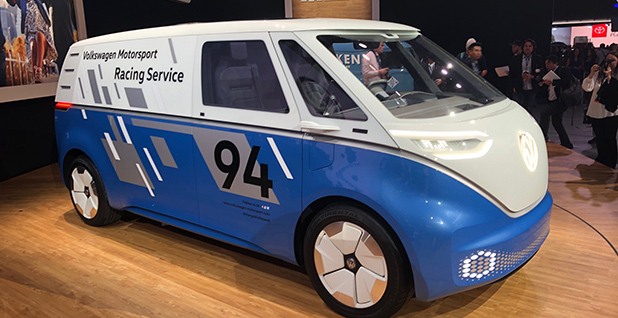 It also shared some numbers on the scale of its overall electrification efforts, which are among the most aggressive of global automakers. The company has said it plans to spend $38 billion through 2022, with plans to build 16 factories dedicated solely to electric cars. The company plans to have 50 pure-electric models by 2025, said Scott Keogh, the CEO of Volkswagen Group of America.

Keogh declined to say if any of the EV factories were destined for the United States or if they would be located at the company’s existing factory in Chattanooga, Tenn.

The cargo van, a concept vehicle dubbed the I.D. Buzz Cargo, would have a range of 340 miles if a customer opted for the largest battery pack of 111 kilowatt-hours. Intended for the "last mile" of delivery in crowded urban centers, it could launch by 2022.

"It is not something we have experience with in the United States," said Keogh in an interview with E&E News, adding that "the opportunity … is relatively straightforward."

The look and styling of the van is similar to the electric passenger bus, the I.D. Buzz, that VW has teased for years as the heir to its celebrated microbus of the 1960s. Volkswagen has plenty of experience with larger vehicles. It owns Traton AG, a commercial-vehicle manufacturer, and under the Volkswagen brand has for decades built a diesel-powered panel van in Europe called the Transporter.

The new electric van would come with a tracking system to monitor the truck’s inventory and is meant to have autonomous features so a driver could do his clerical duties between stops.

The main goal of showing the van in Los Angeles, Keogh said, was to "start to hold conversations" with potential customers.

Also on Volkswagen’s corner of the showroom floor was the Cargo e-bike — essentially a tricycle with a 250-watt motor. In front are two wheels and between them a big box that could carry a payload of up to 460 pounds. Like the delivery van, the bike is in concept mode.