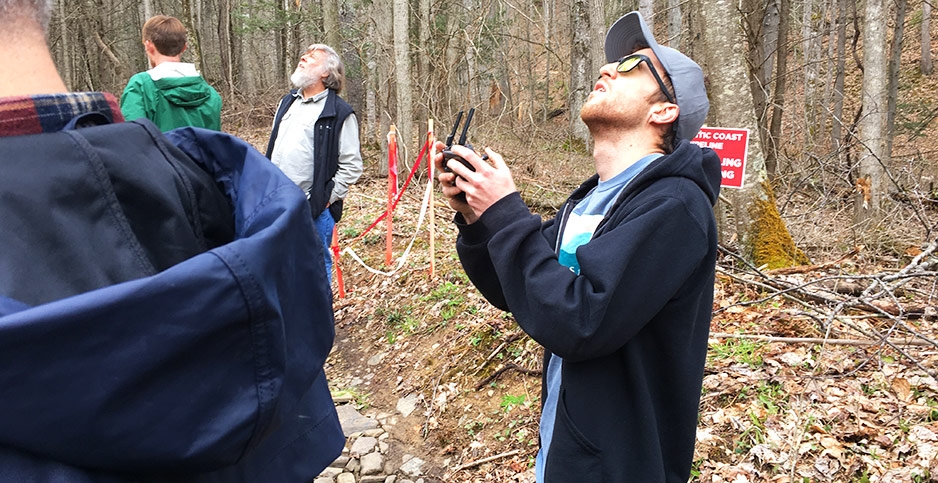 Ben Cunningham of Friends of Nelson County guides a drone to look at areas where trees were felled for the Atlantic Coast pipeline. Mike Soraghan/E&E News

MONTEREY, Va. — Rick Lambert steps off a dirt path and strides between the trees to a hole in the side of a hill. Sometime long ago, water hollowed out the fragile karst geology underlying this farm and created a deep vertical cave.

Orange plastic ribbons are tied to tree limbs nearby, showing that the sinkhole is just outside the right of way for the Atlantic Coast pipeline.

The landscape here is dotted with sinkholes like this one. When it rains, water disappears down the hole and comes out a spring a few miles away. Lambert, a member of the Virginia Cave Board who leads local cave tours, fears that petroleum or other construction fluids could spill down the hole and ruin a local water supply.

To Lambert, this is a sign of how the pipeline will inevitably cause environmental damage.

"This is a sinkhole they’re trying to stay 300 feet away from," said Lambert. "They’re supposed to stay away from all these sinkholes. They can’t do it."

Elsewhere, pipeline opponents worry that clear trout streams could be choked with sediment or that hillsides could slide away as crews cut trenches into them.

The $5.1 billion, 600-mile project will run from West Virginia through eastern Virginia and into North Carolina and is backed by Dominion Energy Inc., Duke Energy Corp. and others. The companies building the project say they have taken unprecedented precautions to minimize environmental disruption. But pipeline opponents aren’t taking their word for it.

Instead, they’re ramping up a ground game that includes drones, computer mapping and a horde of volunteers. Those volunteers will be watching for and reporting environmental violations.

They call it "Pipeline CSI," and it’s a program of the Allegheny-Blue Ridge Alliance, a coalition of more than 50 groups in Virginia and West Virginia that oppose the pipeline (Energywire, Jan. 31).

Technically, that stands for "Compliance Surveillance Initiative." But it’s also a nod to the television series in which investigators scour crime scenes for evidence.

"It’s really up to citizens to make this work," said Rick Webb, a retired University of Virginia water researcher from Monterey. Webb and other leaders of the effort led a handful of reporters on a tour of the area in late April.

Opponents haven’t given up on stopping the pipeline. There’s still at least four lawsuits pending in federal court. But with crews getting ready to dig trenches, they’re signing up "first responders" and recruiting pilots and drone operators for their "Pipeline Air Force."

The pipeline developers say they can handle the scrutiny.

"We’re going to have 1,300 of our own environment and safety inspectors" in addition to state and federal inspectors, said Aaron Ruby, a spokesman for Dominion, the lead company on the project. And the companies are pledging to go beyond merely complying with regulations by using "best-in-class" construction techniques to protect environmental resources.

Dominion and its contractors have experience putting pipelines through rugged terrain, he said, and will scrupulously follow the plans that have been approved.

State regulators say they welcome the extra eyes on the project. They’ve told Pipeline CSI organizers that if they show that they’re vetting their complaints well, their reports will go to the head of the line.

"They’ve told us they’d like to be value-added," said Ann Regn, spokeswoman for the Virginia Department of Environmental Quality. "So that’s how we’re approaching it."

Usually, the state depends on developers themselves to report problems, which they are legally required to do. But part of Atlantic Coast’s permit to build requires the companies to fund extra inspectors to monitor the construction crews’ success in preventing problems from erosion and sediment getting into streams.

The Appalachians here are carved into long, straight ridges covered with hardwoods and narrow cow-speckled valleys of green.

Cutting against the grain of this landscape with a pipeline would be difficult without environmental protections. The slopes can be steep as walls in some spots. The bottomlands are laced with meandering streams that bulge after heavy rains. And it’s underlain by a Swiss cheese of fragile karst geology.

Much of the pipeline has been routed along ridgelines, and crews spent the winter felling trees along many of those tops.

They will trench up steep slopes, trying to avoid landslides. To hold the land in place, they’ll use steel "mesh" and long rods called "soil nails." In the valleys, the pipeline will cross dozens of streams and rivers.

But the activists here don’t think they avoid damage. And they don’t trust them to try very hard.

"The technology is not available to avoid impacting the streams," said Webb. "The excuse will be made: ‘We didn’t meet our expectations.’"

So their league of volunteers will watch the streams and hillsides. Drone operators and pilots of small planes will watch terrain that people cannot reach.

And they say that if regulators don’t act on their complaints, they’ll act on their own, employing the "citizen-suit" provisions of environmental laws.

"We’ll be prepared to enforce the statutes ourselves," Dave Sligh, a environmental attorney with Wild Virginia, said during an explanation of the process during last month’s tour.

With construction set to begin later this spring, the effort to bird-dog pipeline construction through the area could be the defining element of the resistance to the project.

Opponents of the Keystone pipeline protested at the White House. "Water protectors" fighting the Dakota Access pipeline camped for months in North Dakota and clashed with police. Just to the south of here, tree sitters delayed work on the Mountain Valley pipeline (Energywire, April 27).

Activists say they believe Pipeline CSI is the first effort to monitor pipeline construction compliance in such detail, but they say it might not be the last.

"People who build future pipelines," Sligh said, "are going to have to deal with this."