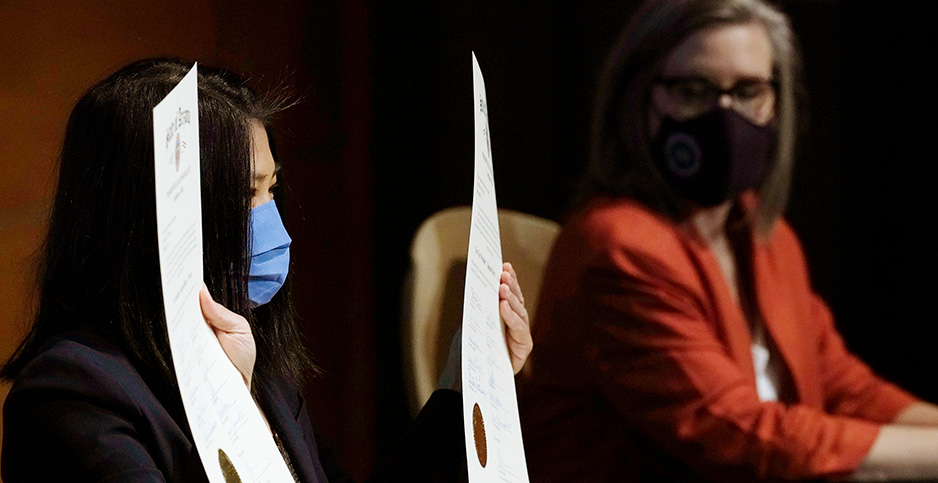 Presidential electors met in each of the 50 states and the District of Columbia yesterday to formally elect Democrat Joe Biden to be the next president.

More Republicans appeared to accept Biden’s victory over President Trump as a result, but often sheepishly or grudgingly, and the president and his core supporters don’t appear ready to concede.

The Electoral College process, usually unremarkable, went off without a hitch, further cementing Biden’s status as president-elect, despite Republicans in a handful of states that Biden won trying to certify the incumbent president as the winner.

Trump and his allies have long claimed Biden won several states only because of fraud or other law-breaking and that, if only legal votes are counted, the president would win. They have not produced evidence of widespread fraud, and their claims have been rejected in dozens of court decisions.

Biden and Vice President-elect Kamala Harris formally clinched victory at about 5 p.m. EST, when California certified its 55 votes for them, giving them 302 votes — 32 votes over the 270-vote minimum — to win. Hawaii followed later with four additional votes.

"The rule of law, our Constitution and the will of the people have prevailed. Our democracy — pushed, tested, threatened — proved to be resilient, true and strong," Biden said in a speech last night after the voting.

"The Electoral College votes, which occurred today, reflect the fact that even in the face of a public health crisis unlike anything we’ve experienced in our lifetimes, people voted," he continued.

"They voted in record numbers. More Americans voted this year than have ever voted in the history of the United States of America," he said. "Over 155 million Americans were determined to have their voices heard and their votes counted."

Biden pointed out that he received more than 81 million votes, a record, and his margin of victory in the Electoral College was the same as Trump’s in 2016 over Democrat Hillary Clinton, which Trump deemed a "landslide."

"By his own standards, these numbers represented a clear victory then," Biden said. "And I respectfully suggest they do so now."

The procedure of the electors meeting is usually widely ignored as an expected part of the process. But it got far more attention this year as Trump continues to deny his loss.

"All of the hard work, focus and attention to details have resulted in a safe, secure, accurate and accessible election," Vermont Secretary of State Jim Condos said at the Green Mountain State’s election event, the first one of the day.

Former Democratic Georgia gubernatorial candidate Stacey Abrams was chosen from among 16 electors to preside over that state’s ceremony. Biden flipped the traditionally red state to win, an outcome largely attributed to Black voters in and around Atlanta, and the state has been central to Trump’s fraud claims.

"I was honored to preside over today’s meeting of Georgia electors and to cast my vote for @JoeBiden and @KamalaHarris, the first Democrats to win GA since 1992. Together, we will restore the soul of our nation, build our economy back better and recover from the pandemic," she tweeted.

"I hope you can see my smiling behind this mask," Nancy Mills, chairwoman of the Pennsylvania Democratic Party and a Biden elector, said as they met to vote.

In some states Biden won, including Georgia and Michigan, groups of Republicans tried to certify "dueling electors" in a long-shot bid to throw out Biden’s victories and elect Trump. None of the attempts is likely to succeed, since neither governors nor legislatures in those states have backed the idea.

"I can’t fathom risking our norms, traditions and institutions to pass a resolution retroactively changing the electors for Trump, simply because some think there may have been enough widespread fraud to give him the win," Michigan House Speaker Lee Chatfield (R) said in a statement about proposals to try to certify Trump electors.

He met with Trump at the White House in November as part of the president’s various attempts to stay in office.

Republicans in Arizona, Georgia, Michigan, Pennsylvania and Wisconsin and other states Biden won have claimed to be Trump electors and said they will move to obtain congressional certification.

Congress will meet Jan. 6 to certify the electoral results. Some lawmakers say they’ll try to stop the certification, but it’s unlikely to prevent Biden from being sworn in Jan. 20.

The same day as the attempted shenanigans, Michigan Rep. Paul Mitchell announced he would leave the Republican Party.

"If Republican leaders collectively sit back and tolerate unfounded conspiracy theories and ‘stop the steal’ rallies without speaking out for our electoral process, which the Department of Homeland Security said was ‘the most secure in American history,’ our nation will be damaged," he wrote in an open letter to House Minority Leader Kevin McCarthy (R-Calif.) and Republican National Committee Chairwoman Ronna McDaniel.

"I have spoken out clearly and forcefully in opposition to these messages. However, with the leadership of the Republican Party and our Republican Conference in the House actively participating in at least some of those efforts, I fear long-term harm to our democracy," he added.

Mitchell, who represents the 10th District north of Detroit, will be the second Michigan representative to become an independent in recent years, after Rep. Justin Amash’s switch in 2019.

Others in the GOP didn’t go that far but showed stronger signs that they’re breaking away from Trump’s attempts to keep the presidency. Sen. John Cornyn (R-Texas) told reporters he views Biden as the president-elect, a title Trump refuses to use.

"I think he’s president-elect subject to whatever additional litigation is ongoing. I’m not aware of any obviously — the Texas case was not successful, as I believed," he said, referring to Texas Attorney General Ken Paxton’s (R) Supreme Court case trying to throw out four swing states’ election results. He called any plans by Republicans to try to stop the certification a "bad mistake."

Sen. John Barrasso (R-Wyo.) said yesterday in a statement published by the Casper Star-Tribune: "I was proud to join thousands of people in Wyoming in voting for President Trump. I believe he’s the leader our country needs. I also respect the result of the Electoral College vote today."

Senate Minority Leader Chuck Schumer (D-N.Y.) denounced Trump and the GOP, calling it "beyond shameful" that Majority Leader Mitch McConnell (R-Ky.) and many others have not recognized Biden as the winner.

"After no evidence of widespread voter fraud was found in the country, after state election officials corroborated the accuracy of the results in every state in the country, after the Trump campaign’s legal team racked up an astonishing win-loss record of 1 and 59, after the Supreme Court summarily dismissed two ludicrous efforts by Republicans to invalidate the results in swing states, will the Republican Party in Congress, here in the Senate, finally acknowledge the results of an election that was determined over a month ago?" he asked in a Senate speech.