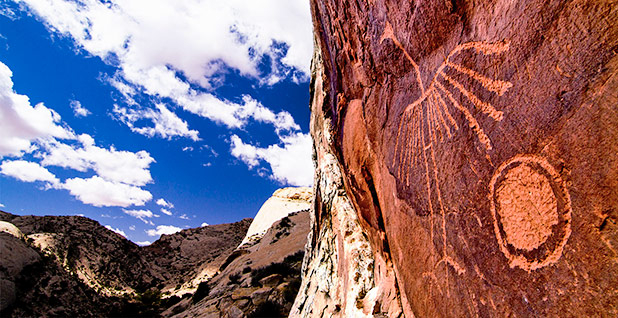 Sportsmen and women say the Trump administration needs to protect public lands, maintain the "number and size" of national monuments, and support efforts to save the greater sage grouse, according to a wide-ranging poll released today that was conducted by a GOP polling firm.

The poll of 1,000 registered voters across the country surveyed last month found 87 percent of respondents agreed — 59 percent strongly — that "funding to safeguard land, water, and wildlife should not be cut," despite budget proposals from the Trump administration that would do just that.

And the poll found that, despite efforts by the administration and Congress to the contrary, 83 percent of respondents support continuing "to keep the number and size of existing national monuments created by presidents over the past 30 years that have protected lands available for hunting and fishing."

Overall, 92 percent said they agree that public lands "like our national parks, forests, and wildlife areas positively contribute to the economy," according to the poll sponsored by the Theodore Roosevelt Conservation Partnership, which counts Donald Trump Jr. among its active members.

"What we found is that whether Republican, Democrat, independent, hunters and anglers strongly support conservation policies across the board," TRCP President and CEO Whit Fosburgh said today during a conference call with reporters.

Fosburgh said TRCP commissioned the poll because so many significant public lands issues are being debated, from budget cuts for conservation programs to the fate of national monuments and federal greater sage grouse regulations.

"Our sense was that it didn’t matter if you were a Trump voter or a Clinton voter, they didn’t want to see major environmental rollbacks, but we couldn’t quantify that," Fosburgh said. "We wanted to make sure we have numbers to go and take to Capitol Hill and take to the administration to bolster our arguments that these programs are wildly popular among sportsmen and should not be rolled back."

The poll — conducted by Public Opinion Strategies, a Republican polling company — is likely to carry weight with the Trump administration, which has actively courted sporting and hunting groups like TRCP and Trout Unlimited. Interior Secretary Ryan Zinke has made improving recreational access for hunters and anglers to federal lands a top priority.

But it comes as President Trump has proposed significant cuts to Interior in his fiscal 2018 budget request, with Zinke recently stating he envisions cutting as many as 4,000 full-time-equivalent positions. The president’s budget proposal also calls for cuts to programs like the Land and Water Conservation Fund.

And Interior is reviewing 27 national monuments under an executive order issued by Trump in April to determine whether any should be downsized or eliminated (E&E News PM, June 12).

The poll found that 82 percent of respondents support the Bureau of Land Management’s ongoing "efforts to protect sage grouse habitat."

The same goes for an Obama administration regulation that broadens the definition of what wetlands and waterways get automatic protection under the Clean Water Act, with 83 percent of respondents indicating support.

Lori Weigel, the Public Opinion Strategies pollster, said the overall results of the poll are significant because hunters and anglers tend to be politically conservative.

Yet, Weigel said, "the responses were very, very consistent," regardless of political affiliation, that sportsmen and women want elected leaders to protect public lands, water quality and wildlife habitat.

"We went through a range of public policy issues. Without exception, we were seeing the overwhelming majority tell us that they were in support of those various policies," she said. "At a time of a great deal of polarization, we just simply are not seeing that take hold with hunters and anglers."

The poll did not just focus on the White House. More than half the respondents said Congress should "do more to help conserve land, water and wildlife habitat."

"That was consistent whether they were Trump voters or Clinton voters; again and again, we saw bipartisan agreement," Weigel said.

Among other major findings:

The poll was conducted online and via telephone interviews May 1-8.

It has a 3.5-point margin of error. Though the poll methodology does not identify the location of the respondents surveyed, it notes that "quotas" were set "to ensure interviews were distributed proportionally throughout the nation. The sample is demographically representative of hunters and anglers."