VPs raise energy, then drop it like a hot piece of coal 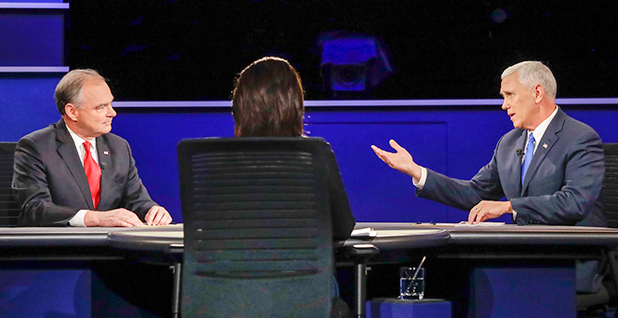 The candidates for vice president rushed into energy issues last night during their only debate before the election. In their opening answers, Democrat Tim Kaine, the Virginia senator, mentioned climate change, and Republican Mike Pence, Indiana’s governor, objected to a "war on coal."

Then those issues evaporated, as the running mates defended the positions of Hillary Clinton and Donald Trump on issues like the proliferation of nuclear weapons, diplomacy with Russia and the role of government in abortion.

Instead, the arguments over climate change largely took place outside the debate hall at Longwood University in Farmville, Va.

Hours before the debate, Sen. Bernie Sanders (I-Vt.) urged undecided voters in Minneapolis to support Clinton based on her plan to address rising temperatures. That dovetails with the Clinton campaign’s efforts to attract young voters who supported Sanders in the primary race, but who have resisted committing to Clinton.

Former Vice President and climate activist Al Gore is also planning to campaign on Clinton’s behalf to shore up her flagging support among millennials, a key demographic that is showing signs of splitting for third-party candidates. CNN and The Washington Post first reported Gore’s involvement.

The Clinton campaign has in recent weeks taken advantage of Trump’s previous comments questioning the existence of climate change. Trump has called global warming a "hoax" and said it’s "bullshit," a position that roughly half of Republicans agree with, according to polls.

"Global warming is a myth," Pence said on the website, according to the Clinton campaign. "The global warming treaty is a disaster. There, I said it. Just like the ‘new ice age’ scare of the 1970’s, the environmental movement has found a new chant for their latest ‘chicken little’ attempt to raise taxes and grow centralized governmental power. The chant is ‘the sky is warming! the sky is warming!’"

Kaine, who has led the campaign’s climate attacks, has been using Trump’s views to help mobilize young Democrats to vote.

"Do you believe in climate science, or don’t you?" Kaine said recently in Houston. "If you do, you should vote for Hillary and Tim, because the other guys are against you."

"My opponent for vice president, Mike Pence from Indiana, says it’s a myth," Kaine said in Reno, Nev. "I mean … if you don’t accept science, where do I start with you?"

Last week, Pence offered a softer tone on climate science than he previously has, by saying humans are partly to blame for rising temperatures. Some close observers of Pence said that could be the first time he’s admitted that humans play a role.

"No, I have not," said Jesse Kharbanda, executive director of the Indianapolis-based Hoosier Environmental Council, when asked if he’s ever heard Pence blame humans.

Two years ago, Pence resisted the idea that people are influencing the atmosphere. "Well, look, I don’t know that that is a resolved issue in science today," Pence said on MSNBC in 2014.

Pence’s repositioning is a hollow victory for Kharbanda. He sees it as a political calculation that helps Pence appear reasonable, even as the governor has overseen efforts to roll back state climate policies.

In 2014, Pence allowed a popular energy efficiency program, called Energizing Indiana, to be canceled. The program, which sought to reduce electricity consumption 1.9 percent by 2019, died after Pence declined to sign a bill that was designed to kill it. It passed into law anyway, under a state statute that automatically approves unsigned legislation.

Under Pence, Indiana became a "spiritual leader" among states that are legally challenging the Clean Power Plan, the cornerstone of President Obama’s effort to reduce carbon dioxide emissions from power plants, according to David Konisky, an associate professor of political science at Indiana University, Bloomington.

Pence said the state would not comply with U.S. EPA’s regulation if it survives in court. He later relented and acknowledged that Indiana would bend to federal climate rules (ClimateWire, Feb. 26).

Konisky said Pence’s action reflects the interests of a state that uses coal for up to 90 percent of its electric generation and for which coal mining is an important part of the regional economy. Unlike many Midwestern states, Indiana doesn’t have a mandatory renewable portfolio standard.

"So in that respect, Indiana looks more like a southeastern state," Konisky said. "I think the positions he’s taken are very much reflective of how Indiana generates power."

Like Pence, Trump has promised to roll back the Clean Power Plan and cancel the Paris Agreement on climate change.

After last week’s debate between Trump and Clinton, Kellyanne Conway, Trump’s campaign manager, clarified that the real estate mogul rejects the idea that human activity is warming the planet. A large majority of Republican voters seem to agree with him.

A poll released yesterday by the Pew Research Center found that 15 percent of conservative Republicans say people are mostly to blame for climbing temperatures. Among liberal and moderate Republicans, 34 percent blame humans.

Other surveys point to the low level of electoral risk that Trump might face by emphasizing natural influences over human effects. A Gallup poll last March found that a majority of Republicans accepted the government’s findings that 2015 was the warmest year on record. But 27 percent said humans contributed to it. The vast majority, or 72 percent, said the warmth was caused by natural changes.

"He believes that climate change is naturally occurring," Conway said of Trump last week on CNN.

That is increasingly a position that’s out of step among Republicans, said Chrissy Harbin, director of federal affairs and strategic initiatives with Americans for Prosperity. She said many GOP lawmakers now accept that humans have some influence over the climate. But they need to do a better job of differentiating that acceptance from the idea that they also support aggressive climate policies, like a carbon tax, she said.

"I think it is totally intellectually appropriate for a politician like Mr. Pence and many others to maybe express some concern over [warming] but then oppose many of the policies that we’ve seen over the Obama administration and that we could expect from any prospective Clinton administration," Harbin said.