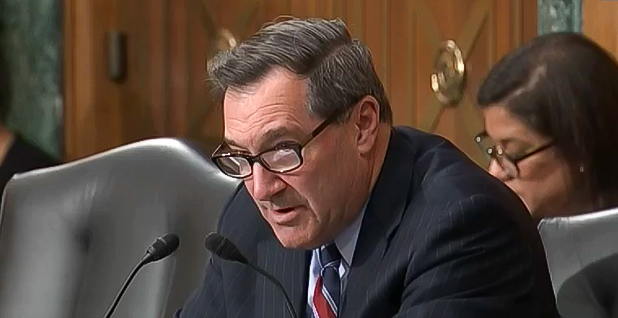 Indiana Democratic Sen. Joe Donnelly’s position as one of the most vulnerable senators facing re-election has not stopped energy companies from opening their checkbooks.

So far, in one of 2018’s most-watched and consequential Senate races, oil, gas, coal and nuclear interests have overwhelmingly lined up behind the incumbent who tracks toward the middle on energy and environment questions.

The race could cost near or above $100 million. Democrats increasingly see the Senate as in play, particularly with the spate of GOP incumbent retirements, and any hope of flipping the chamber hinges on a Donnelly win in a state President Trump got by 19 points last year.

In 2017’s third quarter, the first-term centrist took in about $55,000 from energy company political action committees, part of a $1.3 million haul that leaves him with $4.6 million on hand.

Two GOP House members are the front-runners in the six-person primary to challenge Donnelly: Reps. Luke Messer and Todd Rokita.

Both have about $2.4 million on hand. But neither received more than $20,000 in total energy donations from June 30 to Sept. 30, according to a review of Federal Election Commission records.

This despite nearly identical voting histories of opposing environmental regulation and supporting fossil fuels. Rokita has a 4 percent career League of Conservation Voters score, while Messer has a 1 percent mark.

Both lawmakers signed a pledge not to vote for any climate-change-related legislation that would raise taxes. The pledge was circulated by Americans for Prosperity, the advocacy group tied to petrochemical billionaires Charles and David Koch.

"I’m not surprised many in the energy industry are supporting Donnelly," he said. "That doesn’t mean they’re all in or share his view on every issue, but Donnelly has been a strong voice on a number of energy-related issues over the years, particularly dealing with the EPA."

Donnelly voted against a cap-and-trade bill as a House member in 2009, opposed the Obama administration’s Clean Power Plan and supported the Keystone XL pipeline. He has a lifetime 58 percent LCV score.

Generally seen as a fossil fuel ally — though perhaps not to the degree of his fellow red-state Democrats, Sens. Joe Manchin of West Virginia and Heidi Heitkamp of North Dakota — Donnelly pays particular attention to sectors that matter to Indiana: coal, utilities and biofuels.

In February, Donnelly voted to kill the Interior Department’s Stream Protection Rule, joining with the Republican majority to repeal a landmark Obama-era rule to protect waterways from coal mining.

Utilities that turned out for Donnelly include Duke Energy Corp., which has given him $5,000, and Southern Co., also at $5,000.

Coal accounts for 73.6 percent of the energy generated in the Hoosier State’s power sector, according to U.S. Energy Information Administration data. That figure was close to 90 percent in 2014.

Donnelly pitches himself as a pro-business Democrat sensible on regulations in the model of his predecessor, former Sen. Richard Lugar (R), a 36-year chamber veteran known for a cooperative legislating style.

Donnelly has said he is willing to work with Republicans on their tax code overhaul but does not support the proposals to date.

He was one of three Democratic senators, along with Heitkamp and Manchin, not to sign a letter with tax reform demands to GOP leadership.

Donnelly then traveled with Trump aboard Air Force One to Indianapolis in late September, where the president gave a speech presenting his tax plan.

If Donnelly does not support the plan, "We will come here, we will campaign against him like you wouldn’t believe," Trump said in the speech, according to The Indianapolis Star.

Donnelly is a known quantity. His overall voting record suggests a friend to energy industries, particularly for a Democrat, and his centrist track is unlikely to turn left in a red state like Indiana.

But the industry money may also have something to do with the fraught contest to pick his opponent, labeled "The GOP’s nastiest primary" by Politico.

Rokita’s and Messer’s politics may align, but the tension is personal, not political. They don’t like each other. Both have taken turns calling the other "unhinged," with Rokita calling Messer a "ticking time bomb," and sparred over their loyalty to Trump.

"If you like Donald Trump, you won’t like Luke Messer," stated a Rokita campaign ad that debuted in August. "He’s with the elite."

Messer has accused Rokita’s staff of changing his Wikipedia page, which was heavily edited over the summer to highlight his time as a lobbyist in Washington and his family’s move to a wealthy suburb. Rokita has used both attack lines repeatedly during campaign events.

Messer also slammed his primary opponent for targeting his wife. A May Associated Press story revealed that Messer’s wife, a lawyer, was being paid $240,000 a year in consulting fees for a part-time position in Indiana.

The pair attended Wabash College at the same time.

A recent survey suggests voters are not paying attention to the squabbling. Only 38 percent of 600 Indiana voters recognized the names of Rokita and Messer, compared with nearly 70 percent for Donnelly. The margin of error was 5.3 percentage points. The Old National Bank/Ball State University 2017 Hoosier Survey was conducted Oct. 2-15.

Maisano noted that energy interests tend to avoid picking sides early in competitive primaries. "After Republicans have a candidate, I’m certain you’ll see a more even split in terms of support for Donnelly and that individual," he said.