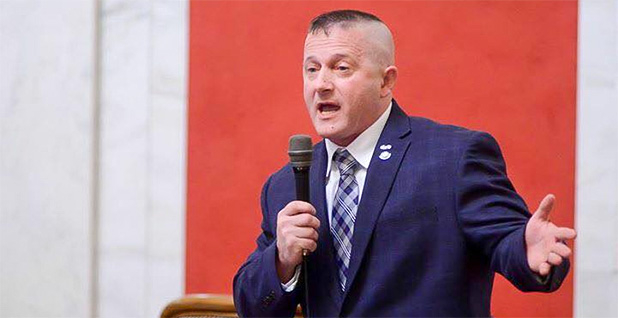 "I’m Richard Ojeda, and I’m running for the president of the United States of America," he said during an event at the Korean War Veterans Memorial in Washington, D.C. He officially filed the bid with the Federal Election Commission over the weekend.

A ferociously intense former paratrooper with the names of fellow service members killed in action tattooed on his body, Ojeda is campaigning on a simple concept. The Democratic Party no longer speaks for everyday working men and women, union members, and coal miners. He wants that to change.

This preoccupation has defined Ojeda’s political career. He made his name earlier this year as a leading voice and combative face of the West Virginia teachers strike.

In an email to supporters Sunday night, Ojeda wrote that people in his hometown of Logan, W.Va., are "going through the same struggles as families in the Bronx, San Francisco and Houston. This is not a West Virginia problem. This is an American problem."

It may seem odd for a failed House candidate to launch a presidential bid, but it is hard to understate the odds against Ojeda in West Virginia’s 3rd District, which covers the state’s southern coal fields.

Ojeda lost by 12 points to Republican Carol Miller last week, taking 44 percent of the vote in a district Hillary Clinton lost by more than 50 percentage points in the 2016 presidential election. It was the largest swing of voters from a Trump district to a Democratic candidate in the country, almost 37 percent.

Analysts say Ojeda’s hard-charging populist pitch could play well in the very Rust Belt and Midwestern states that boosted President Trump to victory in 2016, such as Pennsylvania, Ohio, Wisconsin and Michigan. And none of those states is as deeply red as the seat he failed to win last week.

"Easier for Ojeda to win the presidency than #WV03 because he doesn’t have to win #WV03 to become president," Nathan Gonzales of Inside Elections wrote on Twitter.

Siding with the workers

But part of Ojeda’s pitch to voters was that he voted for the president in 2016 thanks to Trump’s economic message and promises to revive the coal industry.

Two years later he says the administration is "disastrous" and he would never vote for Trump again. Mining is the economic backbone of southern West Virginia, and poverty and rampant opioid addiction have spiked as the industry has declined.

"I was not happy with the things that Donald Trump was saying. But once again we’re talking about being from the coal fields of West Virginia. I look around and I saw my family, my friends, the people that I loved struggling greatly. The coal industry in West Virginia, when it is down, people can’t buy cars, people can’t eat in restaurants, everything suffers," Ojeda said during the event Monday.

His presidential campaign has an environmental and policy platform forthcoming, according to The Intercept.

Ojeda maintains that EPA and environmental regulations are crucial. His stance during the House race was that coal should be mined, but under tight regulations. The coal industry’s legacy in West Virginia is defined by polluted waterways, mountaintop removal and bankrupted companies unable to pay for cleanup.

"The most important thing that needs to come out of a coal mine is a coal miner," he told E&E News earlier this year.

Now, the state is in the midst of a hydraulic fracturing boom, and Ojeda wants significant severance taxes on extractive services. This aligns with a broader call for significantly higher corporate taxes to fund government services for poor people, veterans and the elderly.

"You show me the richest grounds, and I’ll show you the poorest people," he said in a speech while serving in the state Senate. "We are standing on the richest grounds. We’ve got coal, we’ve got natural gas; they’re talking about all this money coming to our state, but what’s it going to do for our people?"

‘Look what I did’

In terms of the national Democratic Party, Ojeda is a contradiction in a crew cut.

He supports coal but says climate change is real. He supported both Vermont Sen. Bernie Sanders (I) and Trump in 2016. He supports marijuana legalization — proposing growing operations on old coal mine sites — and gun rights.

And he has no time for the current state of the party.

Ojeda is already positioning himself as a populist, anti-establishment figure. On his recently launched campaign website, he proposes a $1 million wealth cap on federal lawmakers that would restrict pensions to $130,000 per year and total income to $250,000 per year, with the excess going to charity.

It adds that elected officials will have the same health care plans offered to everyday citizens.

This contributes to a broader strategy of separating himself from the crowded Democratic presidential primary, which looks sure to be packed with progressive figures boasting similar policy positions.

A recent poll of party voters from The Hill found that "none of the above" was the top choice for 2020 nominee from a list that included luminaries such as Sanders; Clinton; former Vice President Joe Biden; and Sens. Elizabeth Warren of Massachusetts, Kamala Harris of California and Kirsten Gillibrand of New York, among many others.

It remains to be seen how well Ojeda’s style of campaigning will match up against these high-profile names — he had said that if elected to Congress he would "fistfight" to preserve pensions for coal miner black lung pensions — let alone some of his positions that are out of step with the national party.

But in his campaign announcement Monday, Ojeda said he brings a distinct appeal to the packed primary. More than that, the party needs someone like him, Ojeda said.

"Look what I did. Ran in the reddest state of the United States of America," he said at the Korean War Memorial. "I turned almost 35 percent of the people that voted for Donald Trump back to voting for a Democrat. Let me tell you something, we can do this. I think that I relate to the people far more than what the president can ever relate to these people."