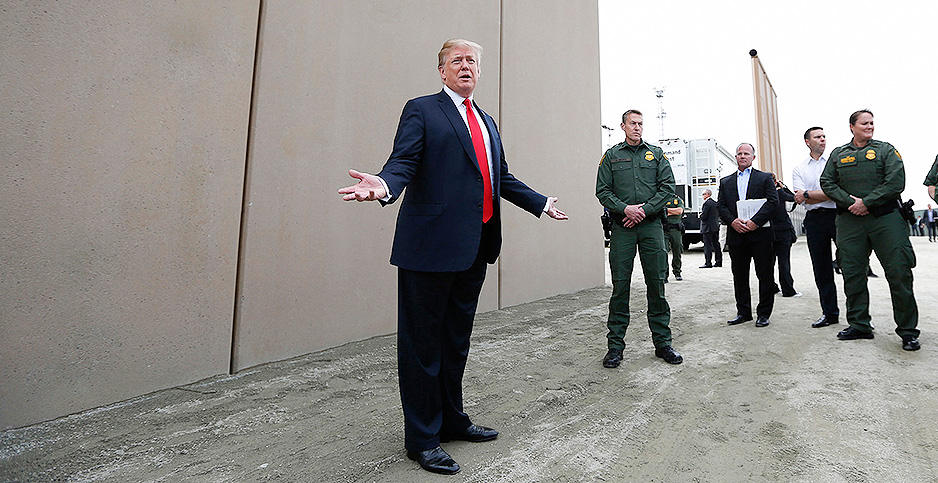 President Trump could evade environmental laws as well as Congress — at least for a bit — if he invokes emergency powers to build a wall along the nation’s border with Mexico.

Experts say Trump appears to have at least some unfettered construction authority, if he chooses to exercise it.

But in exempting border wall construction from the dictates of the Endangered Species Act, the National Environmental Policy Act and the like, Trump would also fan the flames of a broader fight over environmental waivers, stir legal challenges and potentially unsettle even Republican allies.

"I suspect that if [Trump] decides to use some emergency authority to get the funding and manpower to build that ‘big, beautiful wall,’ that action would be challenged … on constitutional or appropriations grounds," said Susan Jane Brown, staff attorney with the Western Environmental Law Center.

A 2011 study by researchers at the University of Texas, University of California and Yale University, for instance, identified 57 amphibian, 178 reptilian and 134 mammalian species living within about 30 miles of the U.S.-Mexico boundary.

"It would require building walls through wildlife refuges and nature preserves, and would forever scar the landscape and ecosystem of the Southwest border in ways we cannot anticipate," Sen. Patrick Leahy of Vermont, the senior Democrat on the Senate Appropriations Committee, said yesterday.

With Trump set to tour the U.S.-Mexico border tomorrow, his allies seem split on the possibility of the president declaring a national emergency and using the associated powers to greenlight border wall construction. Some who have the president’s ear are urging him on.

Others have counseled caution, with Rep. Mac Thornberry of Texas, the senior Republican on the House Armed Services Committee, telling reporters yesterday that he opposes an emergency declaration that would permit Trump to tap unobligated Pentagon funds.

"I am opposed to using defense dollars for non-defense purposes," Thornberry said, adding that it "seems to me that we need to fund border security needs on their own and not be taking it from other accounts."

The waiver of a host of environmental laws turns, in part, on eight power-packed words folded into a section of the U.S. Code concerning construction authority in the event of a declaration of war or national emergency.

The provision allows the Defense Department in a declared emergency to "undertake military construction projects, not otherwise authorized by law that are necessary to support … use of the armed forces." In theory, that could include a border wall.

The provision further specifies that the construction projects may be undertaken "without regard to any other provision of law." Congress included the potentially sweeping provision in a 1982 military construction bill.

While it had much more to do with barracks and runways than with impeding immigrants, this waiver, in turn, foreshadowed even more detailed waivers dealing explicitly with border infrastructure.

In 1996, Congress enacted the Illegal Immigration Reform and Immigrant Responsibility Act, which authorized "additional physical barriers and roads … in the vicinity of the United States border to deter illegal crossings in areas of high illegal entry into the United States."

The 1996 law further allowed waiver of the ESA and NEPA if the government determined the waiver "was necessary to ensure expeditious construction of the barriers and roads." As part of the REAL ID Act, Congress in 2005 expanded the waiver to cover "all legal requirements."

"That waiver provision has been challenged in court, unsuccessfully," the Western Environmental Law Center’s Brown noted.

Last February, notably, Judge Gonzalo Curiel of the U.S. District Court for the Southern District of California dismissed a lawsuit that challenged the waivers of environmental laws for construction of the wall (Greenwire, Feb. 28, 2018).

The Department of Homeland Security had waived myriad laws for a prototype border wall along a 15-mile segment of the border near San Diego, as well as other activities near El Centro, Calif.

Though environmental groups have argued the REAL ID Act waivers were limited in scope and duration, Earthjustice senior legislative counsel Raul Garcia acknowledged today that those arguments have not gained courtroom traction.