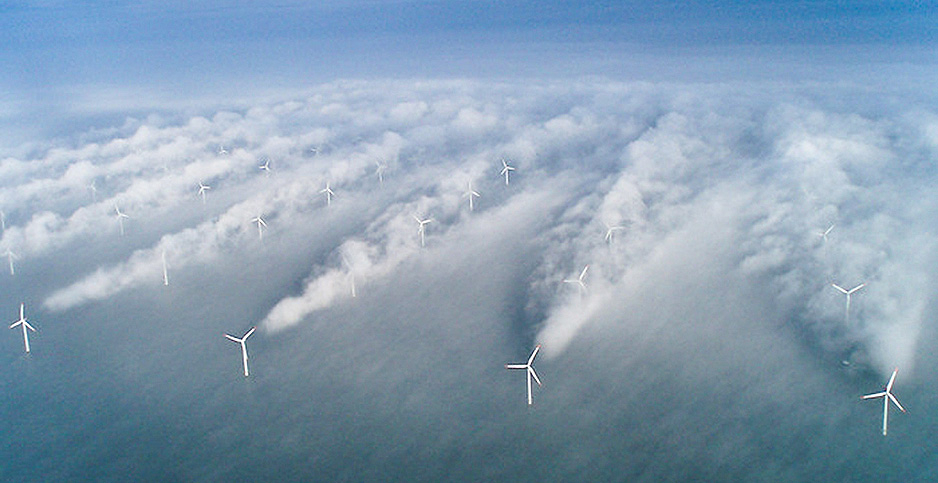 The first picture of "wake effects," or turbulence that can reduce the power production from wind farms, was taken in 2008 by a pilot flying over an offshore wind farm near Denmark. Vattenfall/NOAA

Since 2005, as utilities and consumers began to understand the future economic and environmental benefits of installing more wind power, the nation’s capacity for turning wind into electricity has multiplied 10 times. There are now more than 52,000 whirling turbines, and because the price of wind power continues to drop, this forest of rotating blades is expected to grow.

Driven by federal and state subsidies, it began as a remarkable leap of faith into a poorly understood technology. Some American engineers and scientists working on it suspected it would be a hard problem. Despite the enthusiasm of environmental groups and the tendencies of a growing number of utilities to harness the breeze, pieces of this puzzle were still missing.

In 2007, two reports from Denmark, which had earlier influenced more efficient designs of American wind turbines, laid out a stark but baffling view of the problem. Sweden’s Vattenfall, one of Europe’s largest electricity producers, had built a huge wind farm off the west coast of Denmark called Horns Rev 1.

Offshore wind was regarded by some as the most efficient source of this power, because the winds at sea are stronger and the flatness and uniform temperature of the ocean supposedly took away many of the hard-to-understand quirks of wind power.

At Horns Rev 1, there were 80 state-of-the-art wind turbines standing like sentinels in eight rows, spread over a large rectangle of shallow seawater. This wind farm was built just 12 miles from shore and was theoretically capable of producing enough electricity to power 150,000 homes.

But something was seriously wrong with these numbers.

Sandy Butterfield, one of the pioneers of U.S. wind power, had suspected for years that long, invisible wakes of turbulent air created by the wind turbines in the front of a configuration robbed power from the wind turbines built behind them. He was excited to read one of the Danish reports, titled "The Shadow Effect of Large Wind Farms."

For the most part, wind production reports are held as proprietary information by U.S. utilities. The data are kept secret, which some utilities think prevents other companies from learning about their best practices. But overall, Butterfield and other experts suspect that sharing such information might have helped the U.S. wind industry learn from its mistakes and grow more quickly than it has.

Denmark, which gets 42 percent of its electricity from wind (versus 5.5 percent in the United States), has a government policy of exploiting the technology to the hilt. It made the reports public, and Butterfield could see why. It was a cry for more scientific help.

"This was counterintuitive," Butterfield recalled. "We had to pay attention to it."

The invisible tangle of multiple wind turbine wakes on the farm had somehow prevented the 80 towers from collectively reaching the wind farm’s maximum efficiency. It revealed a problem that could clearly be worse amid the more complex topography of land-based wind farms — and the United States was busy building some of the largest in the world.

Horns Rev 1 had exposed one of the problems that led to "Atmosphere to Electrons." Commonly called A2e, it is a multiyear effort by the Department of Energy to reassess the basic physics of wind farms. It began to take shape in 2011 and is still underway.

In 2013, it led to the construction of the Scaled Wind Farm Technology center (SWiFT), a public test site for wind turbines at Lubbock, Texas. There, DOE, the wind power industry and academic researchers can experiment with turbines and study the impact of their wakes on each other. The site, located in a region with high winds and low turbulence, is heavily instrumented and managed by scientists from DOE’s Sandia National Laboratories and aided by nearby Texas Tech University.

"There is potentially a direct pathway to reduce the cost of energy by improving the efficiency of the wind plant," explained David C. Maniaci, a researcher at Sandia. He said SWiFT has been producing data for two years and will eventually grow to 10 turbines, which will be moved around and adjusted to ascertain the maximum efficiency of an entire wind farm.

Noting that wind power is already "very competitive" with other forms of energy, Maniaci said researchers believe it could emerge as the cheapest fuel if the wake problem can be solved and by increasing the height of turbines and the size of rotors. This summer’s tests used laser devices that helped the researchers see the wakes being produced.

A DOE study released in August came to a similar conclusion that the SWiFT facility and other elements of A2e research will result in much greater efficiencies for U.S. wind farms. It estimates that it may be possible to find as much as $150 billion in cost savings for utilities, consumers and the nation by 2050. The study estimates that the U.S. wind potential could supply more than 7.5 times the total electricity its utilities generated in 2016.

The report, called "Enabling the SMART Wind Power Plant of the Future Through Science-Based Innovation," predicts good news for almost everyone: "Future generations of technologically advanced wind power are anticipated to provide consumers with wind energy at unsubsidized costs competitive with or lower than other new and existing generation resources."

To some, that might seem like a lot of hot wind. But it’s not, said Mike Derby, program manager for DOE’s Wind Technology. "It’s very possible. This is not pie-in-the-sky stuff."

For a long time, the prime argument against wind power was that it’s too variable and would always need massive backup from power plants to balance demand with power supplies and to control the electricity’s frequency, both of which are essential. But that impression has changed within the last 10 years because of better power control technologies.

"They [wind farms] can do anything a coal plant can do, except they can do it quicker and more accurately," said J. Charles Smith, executive director of a group that includes most of the nation’s major utilities. It is called the Utility Variable-Generation Integration Group (UVIG), and it meets annually to discuss renewable energy. The most heavily attended UVIG workshop, Smith explained, is called "wind forecasting for power systems planning and operations."

Among the attendees are operators from the nation’s three major power grids, including portions of them along the heavily populated East and West coasts and in Texas. "They are all very far down the road in integrating forecasts into their operations," said Smith.

Will there be room for coal-fired power plants in the rapidly reforming grid system? President Trump has vowed to protect them. "The administration is not facing reality," said Smith, who spent 45 years in the utility industry.

"The days of coal are numbered. Coal is done, and it has nothing to do with environmental rules and regulation," he said.

The growing wind power array will need more transmission lines to ship the cheaper, cleaner electricity to customers. That will happen, Smith believes, as more coal plants shut down.

Justin Sharp, a meteorologist and a consultant who advises utilities, says he expects that renewable energy will eventually produce 80 percent of U.S. power. If that is left to market forces in each state, it may not happen until the end of the century. But it could happen by 2050, he thinks, if it is part of a national drive to decarbonize the nation’s electrical power system.

As he sees it, the coming build-out of U.S. wind power will be mostly onshore. Unlike Europe, the United States has plenty of space for large wind farms, and they are considerably cheaper to build and maintain on land than they are on the ocean.

But the biggest benefit that cheaper wind and solar will bring, Sharp predicts, will be political.