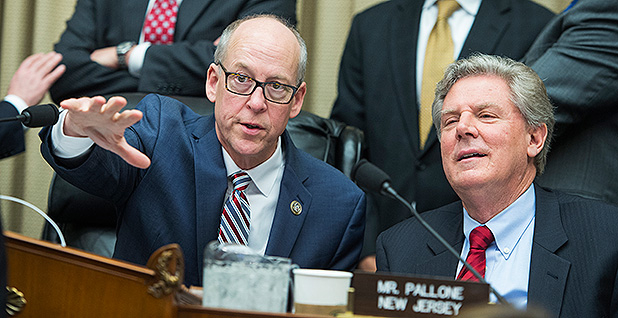 CROOKED RIVER RANCH, Ore. — House Energy and Commerce Chairman Greg Walden will push an ambitious fall legislative agenda that could include a major restructuring of the Department of Energy and a rewrite of the controversial renewable fuel standard.

The Oregon Republican outlined his plans during a wide-ranging interview with E&E News during a stop here last month. Crooked River Ranch is a private community in central Oregon and part of Walden’s sprawling district.

Walden made clear that even with fiscal issues likely to dominate Capitol Hill in the coming weeks, there was still room for moving potentially major energy and environmental legislation through the committee, and even the House, by the end of this year.

Walden emphasized that House Republican leaders have asked all committee chairmen to look at reauthorizing agencies and programs under their purview that in some cases have gone decades without new policy instructions from Congress.

Walden noted his panel is already doing so by passing an update to the Safe Drinking Water Act and moving to reauthorize U.S. EPA’s brownfields program and would next focus on DOE.

"What should the [Energy Department] of 2018 look like as opposed to the agency that was created in the days of energy scarcity under Jimmy Carter? It’s time to do a look," said Walden, who noted that DOE had not been fully reauthorized since forming in 1977.

Committee Vice Chairman Joe Barton (R-Texas), a former chairman with deep ties to the energy industry and an ally of Energy Secretary Rick Perry, will lead the review.

Barton had said he hoped to begin drafting the DOE reauthorization legislation over the August recess, in advance of possible hearings and industry roundtables this fall.

Walden cited several questions he wants addressed. "How’s it set up? How’s it operate? What works today? What are the priorities? What should they be going forward versus what they are today? What does that mean in terms of the organization and structure? I am not going to prejudge that. But that is first of all what we should look at. Do we have the right priorities in place for the energy world we are now in?"

Walden said he was especially interested in getting a handle on the role of DOE’s 17 national research laboratories, which have been targeted for steep cuts in President Trump’s fiscal 2018 budget.

The chairman also said the review should consider what role DOE needs to play in addressing threats to the nation’s electricity infrastructure grid.

Some conservatives, including Barton and Rep. Kevin Cramer (R-N.D.), have pressed for using the reauthorization to give DOE power over some EPA functions. Cramer in particular has pushed the Trump administration to get behind a plan for creating a Department of Energy and Environmental Regulation (Greenwire, Aug. 9).

But Walden does not see the DOE reauthorization as the vehicle to reshape EPA, although the review could inform legislation down the road. "I think the EPA will be another time," said Walden. "I think that’s biting off too much in one [review]."

Congress has never authorized EPA since President Nixon created the agency by executive order in 1970. Since then, however, lawmakers have approved bills tasking EPA with certain duties.

Like many Republicans, Walden said he would back legislation to further codify EPA’s missions. But for that, Energy and Commerce would have to work with other committees.

Perhaps, the most contentious issue facing the panel is a push to reform the renewable fuel standard, which was created more than a decade ago to expand the use of biofuels in the nation’s fuel supply. Much of the controversy has centered over a mandate for having corn-based ethanol make up about 10 percent of all gasoline.

Past efforts to scale back the RFS have never gained much momentum, largely due to resistance from corn-state lawmakers in the Senate who see ethanol production as a boon for farmers.

But long-standing opposition from the oil industry and, increasingly, environmentalists could make the issue ripe for reform.

Moreover, Walden said he believes there could be bipartisan support for revising the RFS ahead of 2022, when current law would give EPA greater latitude in managing biofuels. Neither party is eager to cede such broad control to the regulator.

"It needs to be broad," Walden said of any RFS bill. "We can probably pass whatever we want in the House or could come close, [but] if it’s not a bipartisan vote, it will run into a buzz saw in the Senate and that will be the end of it."

Walden said a markup of RFS legislation is possible this fall if Energy and Commerce lawmakers hosting a series of public roundtables can find common ground.

Environment Subcommittee Chairman John Shimkus (R-Ill.) and Rep. Bill Flores (R-Texas) are leading the effort to draft language that will grow out of ongoing public hearings on RFS.

Shimkus, hailing from a district filled with cornfields, has been an ethanol supporter, and Flores is allied with oil interests and has backed legislation to reduce the mandate.

"I always figured [Shimkus] was the guy to do it because he was known as the ethanol guy. And yet, he understands, and I think that industry does, that it’s got to change, it’s not sustainable going forward," said Walden, who added that Shimkus has been "marvelous" in trying to forge legislation.

For his part, Shimkus said he hopes Congress can find a "sweet spot" on the RFS but offered no guarantees. "I’m not saying we can, I’m not saying we can’t. All I know is that we have diverse voices together, and we’re not yelling at each other. It’s been a pretty good process," he told E&E News.

"Nuclear waste cleanup I would argue is one of the biggest environmental issues we need to address, and we are doing that," said Walden, who worries about aging storage tanks at Hanford leaking into the Columbia.

The bill has its best chance in decades of becoming law given last year’s retirement of Sen. Harry Reid (D-Nev.), a fierce critic who had blocked Yucca’s development since the early 2000s.

However, concerns over how to cover the cost of Yucca and two interim storage sites proposed by the bill are running afoul of House budget rules that require offsetting the cost of any new spending.

The legislation proposes tapping the Nuclear Waste Fund, which collected more than $30 billion from 1983 to 2014 by levying fees on utility ratepayers, but lawmakers have tapped the pot of money over the years for other federal programs.

"Now rather than having however many billion dollars is it sitting there, it’s been tapped into and used by others," said Walden. The chairman said he was working with GOP leaders to find an alternative funding source or get an exemption from budget rules.

Shimkus, whose subcommittee moved the measure, suggested one option may be to eventually tack the bill onto a $1 trillion infrastructure package that the White House and Republicans have said they’d like to pass. Few specifics on that legislation, however, have yet to emerge.

Additionally, Shimkus suggested that bipartisan bills he drafted and helped move through committee over the summer reauthorizing the brownfields program and the Safe Drinking Water Act could soon move to the floor.

He said there may be enough support for them to move on the suspension calendar, a spot reserved for noncontroversial proposals.

Walden would not commit to reviving bipartisan energy reform legislation that moved through both the House and Senate last year but stalled after late-year conference talks broke down.

A version of the measure has already been introduced in the Senate, with 11 titles addressing efficiency, infrastructure, research, natural gas exports and public lands.

"I was not party to any of that at the time, so I don’t know what all caused that to blow up. I know it did blow up, and there were some hard feelings over that," said Walden.

The chairman said he has told both Senate Energy and Natural Resources Chairwoman Lisa Murkowski (R-Alaska) and ranking member Maria Cantwell (D-Wash.) he’s "more than open on it."

But Walden was quick to add that last year’s version would almost certainly stand a chance at being enacted with a Republican now in the White House. He added the bill had "a lot of good pieces," but he declined to offer specifics.

Energy and Commerce members and staff have been directed by Walden to have even minor legislation ready to go this fall given the always-fluid House floor schedule.

Walden noted a pair of bills to speed approval of pipeline and transmissions projects, approved by the committee, were able to pass the House over the summer when leaders were scrambling for legislation to debate amid a calendar shake-up (E&E Daily, July 20).

"I’ve told the team we just need to have our stuff ready. You can beg for floor time and get it, but they also need stuff from time to time, so we always need to be ahead and have some things in the can that can go," he added.