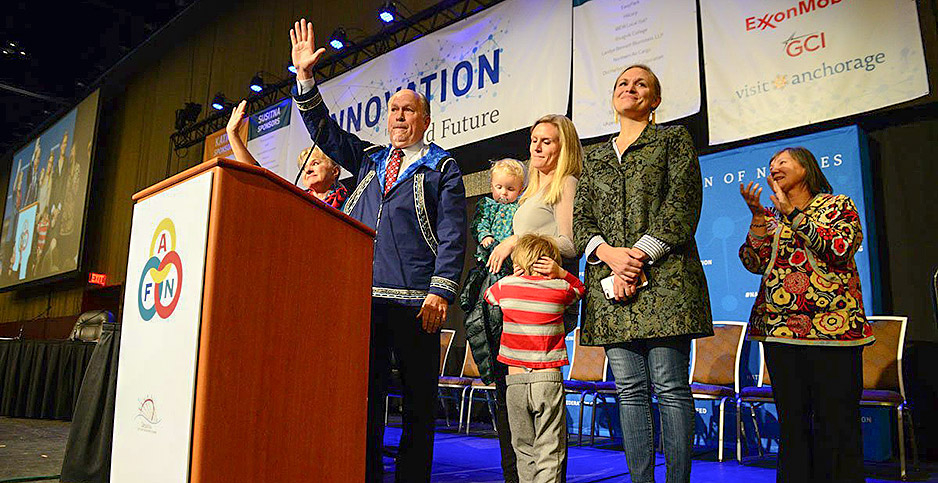 Alaska Gov. Bill Walker (I) stands with his family after announcing he won't run for re-election in Anchorage. @AkGovBillWalker/Twitter

Alaska Gov. Bill Walker (I) dropped his bid for re-election Friday, three days after Alaska Lt. Gov. Byron Mallott (D) resigned and withdrew from the campaign for making what the governor’s office described as an "inappropriate overture" to a woman.

Walker’s exit marked the end of a tumultuous campaign that started as a classic head-to-head faceoff with Republican Mike Dunleavy, a former state senator, and ended with the governor endorsing former U.S. Sen. Mark Begich (D) to replace him.

Walker, 67, announced his withdrawal from the race in an emotional speech to thousands of people attending the annual Alaska Federation of Natives conference in Anchorage.

Wearing a blue kuspuk, the traditional garb of Alaska Natives, Walker began his speech by taking a deep breath. Lt. Gov. Valerie Davidson, who replaced Mallott, stood behind him and his wife, Donna, and their family sat in the audience.

Bill Walker said he was leaving the race to give Begich a better chance of beating the conservative Dunleavy.

"I am confident that Lt. Gov. Davidson and I could deliver a message and a campaign that could earn a victory in this election," Walker said. "But there are only 18 days remaining before Election Day.

"Absentee ballots have been mailed, and Alaskans are already voting," he noted. "In the time remaining, it became clear that we could not win in a three-way race."

The governor charged that Dunleavy, if elected, would eliminate the state’s Medicaid expansion program and zero out funding for the Alaska liquefied natural gas export project.

Walker has been advocating for a state-led gas export project since before he ran for governor. In office, he’s been the strongest advocate for the proposed $44 billion natural gas pipeline project. It would commercialize the state’s 35 trillion cubic feet of natural gas now stranded on the North Slope.

Dunleavy has said the export project should be handled by the private sector, not the state.

Walker also accused Dunleavy of seeking to scrap a hard-won fiscal plan that the governor and state Legislature hammered out early this year. That budget compromise allows Alaska lawmakers to help pay for state programs by using some of the earnings from Alaska’s $65 billion Permanent Fund, a savings account funded by part of the state’s oil revenues.

Under the plan, this year’s state Permanent Fund Dividend (PFD), which goes to every Alaskan, was cut to $1,600 per person instead of the $2,900 that would have been due under the traditional calculations.

On the campaign trail, Dunleavy has been attacking Walker for cutting the PFD payments, which many Alaskans consider to be a birthright.

But the governor insisted that the new fiscal plan would have dramatically cut the state budget deficit, improved Alaska’s credit rating and "preserved the PFD program into perpetuity."

Instead of sticking with the fiscal plan, Walker said Dunleavy has advocated $1 billion in budget cuts that would decimate the state’s programs for education, rural Alaska and health care.

In throwing his support behind Begich, Walker said that although he disagrees with the Democratic candidate on many issues, "on balance it is my belief that … his stance on important issues that I have listed are more closely aligned with my priorities for Alaska."

Dunleavy and Begich were both in the audience during Walker’s speech to the Alaska Federation of Natives and took part in a scheduled candidates debate later in the afternoon.

Dunleavy remained seated during the federation’s standing ovation for Walker at the end of his speech, and his campaign staff was quick to criticize Walker’s comments after the conference.

"Governor Walker could have chosen a dignified, graceful exit to his campaign," Brett Huber, campaign manager for Alaskans for Dunleavy, said in a statement. "Instead, he opted to bow out with a bitter, partisan attack on Mike Dunleavy. It’s too bad — Alaskans deserve better.

"Mike Dunleavy has traveled the state, listening to voters at town halls, debates, and forums," Huber added. "The message from voters is clear: they’re upset about slashed PFDs, skyrocketing crime, explosive government growth, record unemployment, and dismal educational outcomes. Mike Dunleavy has the vision and leadership to tackle these challenges and place Alaska on a different trajectory."

Walker and former Lt. Gov. Mallott began their re-election campaign in August 2017 when they filed as "unaffiliated" independent candidates. But this April, Walker announced tentative plans to enter the state’s Democratic primary, taking advantage of a court ruling that permits independents on the Democratic ticket.

By running under the Democratic banner, Walker hoped to avoid an independent’s fate of facing off in the general election against both the Republican and Democratic candidates.

Walker’s campaign envisioned a faceoff between Walker and Dunleavy, who has been the top Republican contender throughout the race.

At the time, Walker’s campaign manager John-Henry Heckendorn said the governor’s team "would like a matchup with somebody who’s proposing what we would articulate as something that’s completely unrealistic."

But in June, Begich jumped into the race, and Walker decided to run as an independent. When Begich and Dunleavy won their party primaries, the race for governor became a three-way competition, with polls consistently showing Dunleavy ahead.

Since then, union leaders and top Democrats have worried that Walker and Begich would split Alaska’s independent and Democratic vote, which would result in a win for Dunleavy.

According to Walker campaign officials, the Begich and Walker camps were in talks "about a path forward" in the campaign even before Mallott’s resignation.

Walker has been actively seeking the governor seat since 2010, when he first ran for governor in the Alaska Republican primary. He lost that race to Sean Parnell, who replaced former Gov. Sarah Palin (R) in 2009 when Palin resigned halfway through her term.

Four years later, Walker, who describes himself as a lifelong Republican, sought a rematch with Parnell in the Republican primary. When the polls showed him losing again, Walker dropped out of the primary to run as an independent.

As the general election approached, however, the polls had Parnell edging out both Walker and Mallott, who was running as the Democratic gubernatorial candidate.

That’s when Walker joined forces with the Democrats to create the "Unity" ticket, with Walker running for governor and Mallott for lieutenant governor. The new ticket won by a little over 6,000 votes.

Once in office, Walker and Mallott formed a brotherlike friendship, much closer than most other Alaska governors and their lieutenant governors. Even after Mallott’s resignation, Walker told Alaska reporters that he will continue to cherish his friendship with Mallott.

Walker ended his speech to the Alaska Natives group stating, "It is the honor of my life to have served as the governor of this great state. … Ultimately it’s not how long my team and I serve, it’s how well we serve the people and the state we love while we have the opportunity and honor to serve."