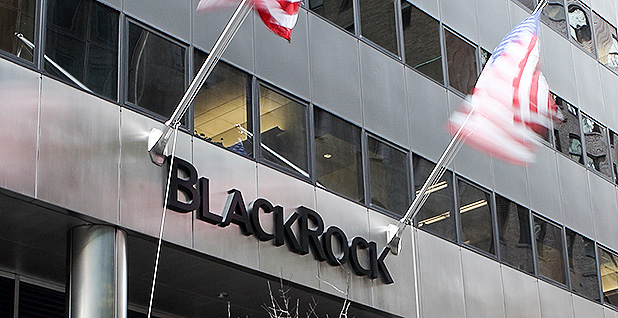 The deep-pocketed investment firm BlackRock Inc. today announced a series of steps to address the financial risks of climate change, decisions that could send shock waves throughout the private sector.

Studying the disclosure of climate change risks, including physical risks like rising waters and government policies to cap greenhouse gas emissions, will be one of BlackRock’s top priorities for 2017, the firm said.

In a separate statement, BlackRock said it supported the work of the Task Force on Climate-Related Financial Disclosures — a Group of 20 panel — and said it may vote at annual meetings in favor of shareholder resolutions on climate change.

"Climate risk awareness and engagement has advanced over the past several years and just as our thinking on climate risk continues to evolve, we believe that companies are also increasingly more aware of its business relevance," the company said.

"For directors of companies in sectors that are significantly exposed to climate risk, the expectation will be for the whole board to have demonstrable fluency in how climate risk affects the business and management’s approach to adapting and mitigating the risk," BlackRock’s new policy reads. "We will consider voting in favor of proposals that would address our concern."

The updated stance of the company, which manages more than $5 trillion, could have wide-reaching repercussions.

A group of investors, led by Boston-based Walden Asset Management and the Washington nonprofit Center for Community Change, prompted the new policy by filing a shareholder proposal.

It called for a review of how BlackRock votes on shareholder proposals and its climate change positions. The City of Seattle Employees’ Retirement System joined the proposal, too.

The company’s decision to make climate risk "a priority in their engagements with public companies is an exceedingly important message," said Tim Smith of Walden Asset Management.

"We are hopeful that BlackRock’s announcement and its engagement on climate risk will also result in active support for shareholder resolutions on climate change," Smith said in a statement.

The Wall Street powerhouse has been criticized for publicly warning of how climate change threatens the economy while abstaining from voting its shares in favor of stockholder proposals demanding more information about climate change.

Many investors view that stance as hypocritical.

A report last year by the Asset Owners Disclosure Project, a nonprofit, found climate resolutions at Exxon Mobil Corp. would have passed if BlackRock and other large institutional investors had voted in favor of them (Climatewire, Sept. 6, 2016).