Walmart has thousands of suppliers. It’s slashing their CO2 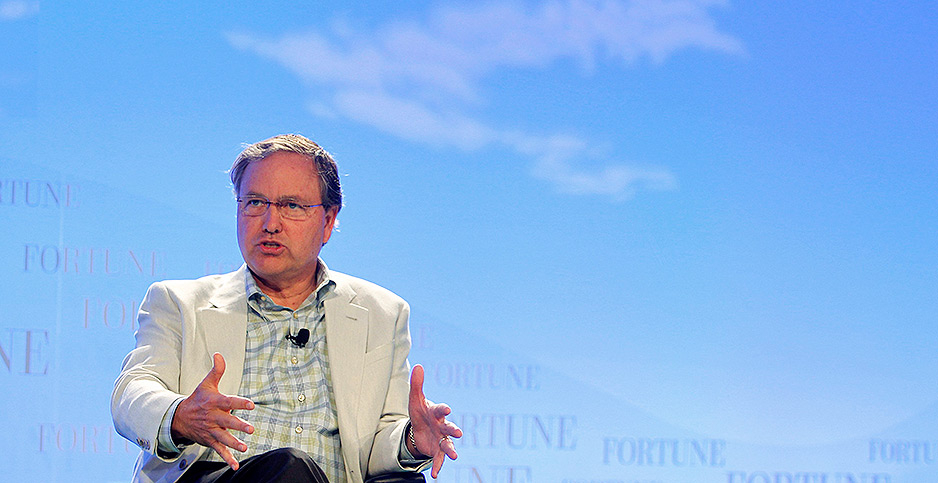 A corporate cause emerged from Hurricane Katrina.

Among the storm’s tragic results in 2005 were over 1,835 deaths, $135 billion in damage and 1 million displaced people. There was also at least one positive outcome. It’s called "Project Gigaton," an international plan by Walmart to cut greenhouse gases 1 billion metric tons by 2030 from its sprawling supply chain. If it works, it could be one of the world’s most ambitious attempts so far to curb climate change: the equivalent of taking 212 million cars off U.S. highways for one year.

The effort, first announced in April 2017, and others like it have spread to more than 5,000 companies. Unlike government regulations, which stop at national borders, these efforts are described in the words of one recent report as rapidly "cascading" across international boundaries.

The trigger for much of this action is Walmart, a chain of discount stores that is believed to be the world’s largest retailer with over 11,000 stores in 28 countries. Headquartered in rural Bentonville, Ark., it is known mainly for its low prices, hyperaggressive growth since its first store opened in 1962 and "small town values."

Walmart was both a victim and a responder during Katrina. The night when Jessica Lewis, the co-manager of the Walmart in Waveland, Miss., (population 6,435) discovered her store was a sodden, blacked-out mess of debris, she sent a bulldozer in to clear a path so employees with flashlights could recover dry clothes, food and bottled water to share with the community.

During a closed-circuit speech to Walmart employees a month after the storm, Lee Scott, then Walmart’s president and CEO, explained that Lewis didn’t ask for permission. She "did the right thing, a trait I am proud to say is bred in our culture." In all, Walmart was one of the storm’s earliest responders, sending more than 2,500 truckloads and donated goods into stricken areas.

"Katrina was a key personal moment for me," Scott recalled later. "I also saw the pain, the difficulty and the tears."

Dealing with difficulties was business as usual for Scott. For about a year before Katrina, he had been conferring with consultants and aides about how to handle mounting criticism directed at Walmart. His company’s giant stores were often depicted in the media as stealing customers from small, downtown businesses across the United States. Walmart paid low wages, pushed its employees and managers into working long hours, and occasionally fought unions.

But in the aftermath of Katrina, Scott was hearing something new. The company’s response to the storm was being praised. "If the American government would have responded like Walmart has responded, we wouldn’t be in this crisis," Aaron Broussard, president of Louisiana’s Jefferson Parish, had remarked on national television.

This gave Scott what he described as a "lightbulb" idea about how Walmart and other big businesses might use their reach and influence over time to gradually reduce future threats of killer storms and other aspects of climate change. "We should view the environment as Katrina in slow motion," he said in a speech to his employees.

He explained how, over the next few years, Walmart would intensify its efforts to use more renewable energy, increase energy efficiency and recycle its wastes, but Scott didn’t stop there.

Walmart would extend the campaign to its growing number of affiliates in China and then enlarge the effort by encouraging its worldwide supply chain, a network of over 60,000 companies that sell it products and raw materials, to get involved. The company could do that by showing "preference" to suppliers that "set their own goals and aggressively reduced their own emissions."

Scott said he would share any technological breakthroughs with Walmart’s competitors. "We need to cut emissions worldwide."

‘It was their idea’

Nobody in Walmart, including Scott, knew what it would require to meet these promises, but the company’s managers were used to big goals. Sam Walton, the founder of Walmart, often encouraged his aides to venture into unknown areas. It was estimated that 80% or more of the greenhouse gas emissions caused by big corporations came from their suppliers. But how to get suppliers to reduce them was among the unknowns.

"You know, we are in uncharted territory as a business," Scott explained in his 2005 speech. "You won’t find any case studies at the Harvard Business School highlighting answers for companies of our size and scope."

In 2005, there were a few people who were already trying to measure the impacts of climate change on companies. The Carbon Disclosure Project (CDP) was founded in 2000 in London after a group of almost 50 investors complained that they couldn’t compare one company’s climate risk against another.

In 2008, Walmart, which had disclosed its own risks and emissions, approached CDP to see how the emissions of companies in its supply chain might be measured. "It was their idea. They came to us and we said sure, we’ll do that," explained Sonya Bhonsle, who currently heads the supply chain research program for CDP.

Eighteen other corporations, most of them large ones, were also attracted to the idea. Up to that point, according to Bhonsle, there was no scientific method to pinpoint where large greenhouse gas emissions might be in a supply chain or strategies to show companies how to reduce them.

"Some companies were setting targets based on rhymes. You know, like 20 megatons by 2020. That’s what happened when marketing people got involved," she said. But Walmart wanted details. "You cannot reduce what you’re not measuring."

Walmart, Bhonsle said, became the first retailer to submit to a science-based examination of where its corporate emissions came from. Since then, 150 other companies have followed suit. Fifty-seven of them were in Walmart’s supply chain, and 64 others are now setting up similar systems.

In doing that, the big companies were setting themselves as examples, then pushing their suppliers to find and limit their own emissions. Bhonsle says Walmart stands out in this practice. "Because of the place that they hold in their suppliers’ hearts — from Kellogg’s to really small companies — everybody wants to make sure they’re seen as a supplier to Walmart."

The effort got to middle-sized companies that were beyond the reach of environmental groups and small companies that sometimes didn’t know where to begin. Bhonsle recalled one that responded, "Thanks very much for inviting us into this program, but we don’t own any greenhouses." Walmart created digital calculators and opened portals on its website to help explain how its suppliers could identify and then measure their biggest emission sources so they could report them to CDP.

In 2009, Walmart expanded its definitions of climate-related problems and how to deal with them by creating a "sustainability index" that encouraged companies to gauge things such as energy efficiency; the life cycles of products; recycling; waste reduction; and products that caused deforestation, like meat from illegal cattle grazing. It later included accounting for wasted water and agricultural practices that raised emission levels and polluted the environment by using too much fertilizer.

As Walmart’s definitions expanded, so did the actions of its suppliers. According to the most recent CDP report, there has been a "cascading effect." In 2017, it noted that 23% of Walmart’s suppliers began recruiting their own suppliers to report their practices. Last year, the recruiting effort sped up to 35%.

This year, CDP reported that 115 "major purchasing organizations from around the world" are deeply involved in studying their emissions. Together, they have a combined income of $3.3 trillion. "In many cases they are moving considerably faster and further than governments have required," CDP noted.

CDP gives companies the option to disclose their emissions and efforts to reduce them either publicly or privately. It doesn’t audit them, but as it gathers more data, the outliers stand out. So both CDP and Walmart urge companies to provide "transparent" measures of their efforts, so consumers can see and trust them.

There is prestige in being seen with other companies on the CDP webpage, explains Bhonsle. If companies exaggerate their performance and "anyone catches them out, it can go horribly for them."

A pickup, not a Rolls-Royce

One of the centers of the cascading effect is China, now the world’s largest emitter of greenhouse gases. CDP noted that pressure from investors caused 50 companies in China to report climate emissions and risks. Pressure from Walmart and other big companies prodding their supply chains to take more actions resulted in over 500 Chinese companies reporting.

In 2014, Walmart tightened its focus on its Chinese suppliers by partnering with the New York-based Environmental Defense Fund’s "Climate Corps." The program places graduate students into companies and organizations across the U.S. and China. Ten have been sent to Walmart China, where they recommended energy efficiency and greenhouse gas reduction measures for Walmart’s suppliers.

Four years later, when Walmart unveiled its biggest goal to cut greenhouse gases — Project Gigaton — it devoted a special subset of the goal to its Chinese suppliers, suggesting they could achieve a 50 million metric ton reduction by 2030. That would be the equivalent of ending the emissions from supplying electricity to 40 million Chinese households.

That sounded daunting, but the goal fits with a number of recent Chinese government programs, including a national trading system for reducing greenhouse gas emissions. "Our journey in China echoes what we’ve seen throughout our 25-plus years of working with companies. Setting big goals drives innovation and business value," said Elizabeth Sturcken, who runs EDF’s business liaison program.

Recently, Walmart added more leverage to its requests from suppliers by forming a partnership with HSBC Group, formerly known as Hong Kong and Shanghai Banking Corp. Ltd. It is one of the world’s largest international banks.

In a joint statement with Walmart, HSBC invited Walmart suppliers "who demonstrate progress" in either Project Gigaton or Walmart’s Sustainability Index to apply for "improved financing from HSBC based on their sustainability ratings."

"The procurement standards of a buyer are a huge driver for sustainability," explained Natalie Blyth, an HSBC official.

All this goal-setting and prodding has helped Walmart enlarge its presence in China. The company opened 33 new stores in China last year. All of them use "energy-saving features," according to the company. Four of them recently earned a prized "green store" certificate awarded by the Chinese government.

Just what Walton, who started his company by setting big goals on stores in small-town America, might think of these results is unknown. While he made several members of his family multibillionaires, he also passed on a lot of value to his customers.

He disliked showing off his wealth and drove the Ford pickup truck he bought in 1978 until he died in 1992. Now it is parked in the Walmart museum in Bentonville (population 49,298).

"Why do I drive this truck?" asked Walton, whose tight focus on his galaxy of stores lapsed only occasionally, usually during bird-hunting season. "What am I supposed to haul my dogs around in, a Rolls-Royce?"