Want a safe sunscreen? Get ready for ‘a lot of confusion’ 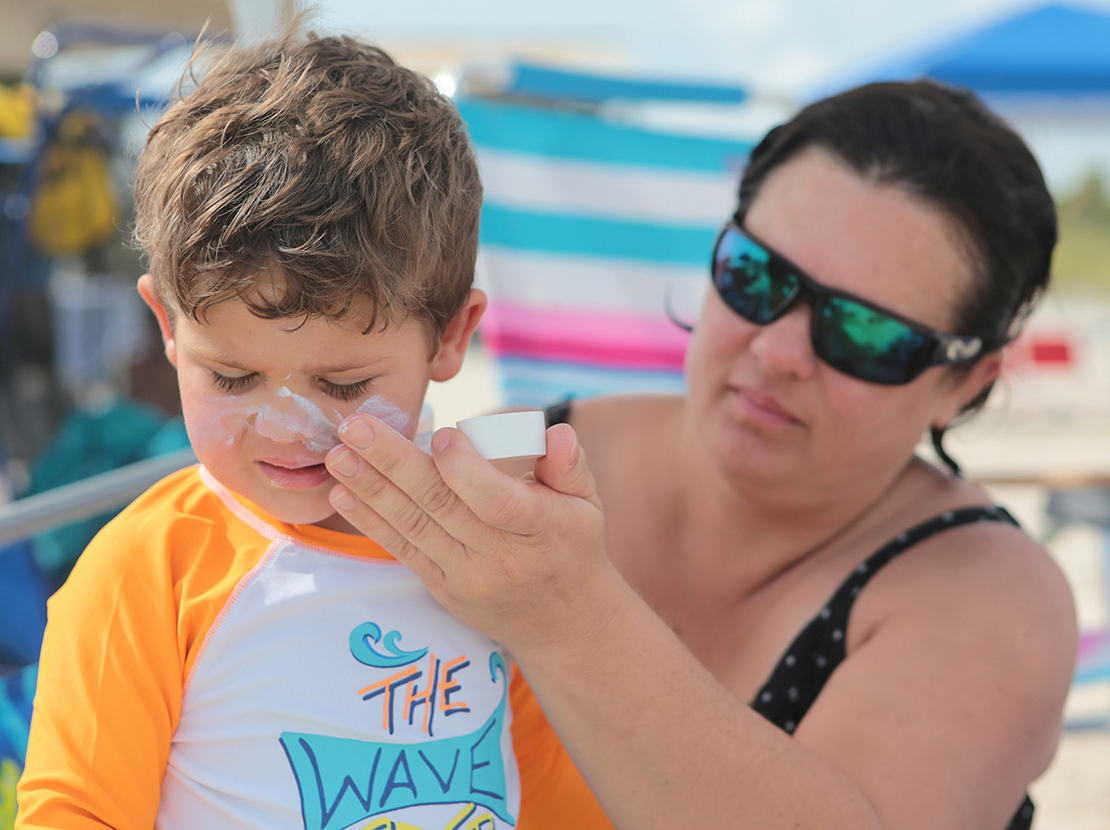 Experts agree: Sunscreen is a life-saving tool in the fight against skin cancer and other severe health risks.

But many varieties carry invisible ingredients that threaten people and the environment — leaving advocates to worry about those impacts and that federal oversight is taking too long to catch up.

“There has been a significant increase in attention to the issue of sun safety and wearing sunscreen,” said David Andrews, a senior scientist with the Environmental Working Group. “Everyone uses these products, but there’s been a rise in uncertainty about what they’re using. There’s a lot of confusion.”

Risks associated with certain sunscreens have often flown under the radar, in no small part because the products themselves are crucial for averting health problems. But growing attention to environmental impacts linked to sunscreen have drawn scrutiny in recent years, as has mounting public awareness around chemicals and their ubiquity in everyday products.

And the more consumers look, the more problems they are likely to find.

Multiple studies have shown that some sunscreens can damage coral reefs and have a broader impact on the ocean. States like Hawaii and Florida have targeted certain chemicals in sunscreens in an effort to protect fragile ecosystems (E&E Daily, July 30, 2021). Many sunscreens also range in efficacy and trade-offs for human health. Mineral options deflect the sun’s rays through titanium dioxide or zinc oxide, inorganic compounds that prevent penetration from ultraviolet rays. Chemical alternatives, by contrast, absorb those rays in order to protect skin.

Both come with trade-offs. Mineral sunscreen can wash off easily and is often associated with thick white streaks that can be unappealing for users. Chemical sunscreens have meanwhile set off alarm bells as regulators look more closely at their health and environmental impacts.

Some advocacy groups have been thinking about these issues for years — even more so as people increase their time outdoors to stay safe amid a deadly pandemic. Earlier this month, EWG released its 16th annual Guide to Sunscreens, which closely assesses the risks and rewards associated with a wide range of options. This year’s guide revealed some ominous findings — namely that about 75 percent of more than 1,850 products either offered insufficient protection from the sun or contained ingredients potentially harmful for human health.

Of the nearly 2,000 products tested, only 1 in 4 met EWG’s standard for adequate protection, while also steering clear of ingredients the group deemed “worrisome.”

Chemical sunscreens drew the bulk of the scrutiny, including many spray products, as aerosols can more swiftly expose people to contaminants via inhalation. A major concern in some chemical sunscreens is the presence of oxybenzone, which can protect the skin from UV rays. But the compound poses other health concerns, including potentially disrupting hormones, as well as damaging and penetrating skin.

Andrews highlighted oxybenzone as a leading ingredient to avoid in sunscreens. A 2008 study from the Centers for Disease Control and Prevention found that the chemical had been detected in the bodies of around 97 percent of Americans. A 2019 study from the National Toxicology Program also detected an increased rate of thyroid tumors in female rats that could stem from oxybenzone exposure.

And the chemical’s implications go beyond people. A study published this month in the journal Science found that oxybenzone endangered coral reefs — particularly those already suffering bleaching events due to climate change.

Alexandra Kowcz, chief scientist for the Personal Care Products Council, said in a statement that “oxybenzone is one of the few FDA-approved ingredients that provides safe and effective broad-spectrum protection and has been approved and safely used since 1978.”

Kowcz further stated that studies and regulatory assessments have shown that “there is no causal link between oxybenzone use in sunscreens and health issues in humans.”

“The science isn’t settled, but there are many indications that this is in people and the environment,” he said.

FDA announced in 2019 that it would move to update its sunscreen regulations, asking for additional information on 12 active ingredients, including oxybenzone (Greenwire, Feb. 22, 2019). The agency did not respond to a request for comment on that process, or concerns around such chemicals more broadly.

But FDA has proposed that only two ingredients in sunscreen be considered “generally recognized as safe and effective“: titanium dioxide and zinc oxide, which are used in mineral sunscreens. That determination is for older drugs that medical professionals have decided do not require prior approval by FDA to enter the marketplace. The agency has said oxybenzone and other chemicals under scrutiny are not currently proposed for that designation “because the public record does not currently contain sufficient data to support” that they can be considered GRASE.

Not all toxic substances in sunscreen are added intentionally. Last year, the company Johnson & Johnson had to recall multiple products after they yielded trace amounts of benzene, a known carcinogen. Recalled items included known household names, like Aveeno Protect + Refresh aerosol sunscreen and a number of Neutrogena sunscreens (Greenwire, July 15, 2021).

And issues with sunscreen extend beyond chemicals. Consumers often focus on sun protection factor, or SPF, which serves as a rating of how much solar energy (or UV radiation) is required before a sunburn appears on protected skin versus on unprotected skin. Last year, an EWG peer-reviewed study determined that most sunscreens sold nationwide are not providing adequate sun protection relative to their stated SPF. That analysis found that many sunscreens reduced UV exposure by only half of what would be expected.

The group underscored those ongoing problems this year, as well, calling into question the testing methodology companies use to determine SPF, as well as the rating’s emphasis on sunburn over other health harms. Products with high SPF also give a “false sense of security,” EWG argued, overpromising on the extent to which they can shield people from the full effects of sun damage. EWG also said they place an overreliance on protection from UVB rays, which are responsible for sunburn, rather than UVA rays, which are linked to aging and, eventually, skin cancer.

Andrews said the advertising around SPF is misleading and further confuses consumers, who are largely left to their own devices to determine what course of action will best protect them.

“‘Be safe’ is a marketing term,” he said. “There’s no FDA definition.”

EWG believes more could be done to address that issue. Sunscreens in the United States face more regulatory scrutiny than many other cosmetics, in no small part because they are treated like over-the-counter drugs, which are subject to heavy oversight. FDA has not approved new sunscreen filters since the 1990s, even as Europe has moved forward with new active ingredients. The agency did not respond to questions about why that process has lagged.

Accusing EWG of “fearmongering,” Kowcz of the Personal Care Products Council emphasized how closely members of the trade group have worked with regulators.

“Sunscreens on the market today are backed by decades of scientific research and safe use to help adults and children guard against the dangers of excessive sun exposure,” Kowcz said.

Advocates emphasize that part of staying healthy in the sun will always include sunscreen. But, backed by a range of public health experts and the Centers for Disease Control and Prevention, they advise keeping a number of factors in mind.

Those can include avoiding any sunscreens with oxybenzone and avobenzone, along with opting for a non-spray sunscreen. Proper application is a challenge with spray sunscreens, potentially resulting in an insufficient layer of protection and a greater risk of inhalation. Products containing zinc oxide and titanium dioxide are likely best, according to Andrews of EWG, given that they are generally safe and effective in protecting people from UV rays.

Dr. Debra Jaliman, a board-certified dermatologist who supports EWG’s recommendations, said in a statement that mineral options coupled with other precautions could help mitigate risk for consumers.

“It is important for people to choose mineral sunscreens that include zinc oxide [or] titanium dioxide, and come with a broad-spectrum label and an SPF between 30 and 50,” said Jaliman, adding that those products help protect skin “from the sun’s harmful ultraviolet rays and have less concerns than chemical-based sunscreens, which can also irritate the skin and get absorbed into the body.”

Still, there are downsides to mineral sunscreen, which have at times underperformed in testing, according to Consumer Reports, and require reapplication consistently. Experts broadly agree that those downsides do not overshadow the dangers posed by the sun and advise use of sunscreen regardless. But they say best practices involve taking a range of sun safety measures. The CDC, for example, advises wearing hats, clothing and sunglasses when spending extended periods of time outdoors.

EWG also recommended being more intentional about when the sun is at its peak and remaining aware of different times of day and planning accordingly.

“Ultimately, we are trying to advocate for what would be the best outcome for public health,” said Andrews.