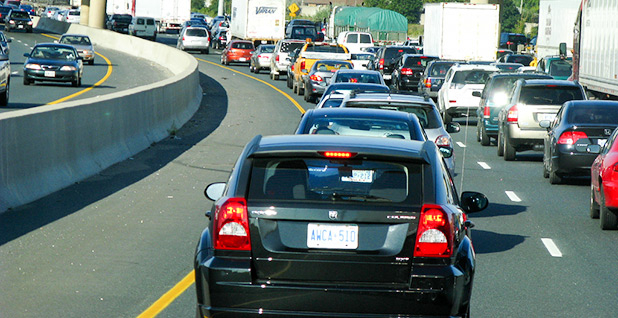 President Obama raised the hopes of American drivers when he unveiled fuel economy standards for motor vehicles in 2011.

"We’ve set an aggressive target, and the companies are stepping up to the plate," he said. "By 2025, the average fuel economy of their vehicles will nearly double to almost 55 miles per gallon."

But that’s not accurate.

By 2025, the average fuel economy of passenger vehicles will be closer to 44 mpg.

U.S. EPA and the National Highway Traffic Safety Administration acknowledge the methodology is outdated and even created an updated version in 2006 that is now used for EPA labels that tell car buyers what fuel efficiency they can expect.

But the test for ensuring CAFE compliance remains unchanged thanks to the 1975 Energy Policy and Conservation Act. The law, which created CAFE, requires the government to stick with methodology devised more than 40 years ago.

With two procedures to measure fuel economy, the confusing result is a 20 percent gap between what consumers are told and what the government says it requires of automakers.

As cars become more advanced, that gap is likely to grow, giving advantages to automakers in regulations that are rarely noticed by car buyers.

The CAFE program is shared by two agencies — EPA develops testing to measure fuel economy, and NHTSA provides enforcement. The CAFE tests are done by automakers that must certify compliance.

The result is the "two-cycle" test, which runs vehicles on indoor car treadmills known as dynamometers to simulate highway and city driving.

During each cycle, vehicles follow a precise sequence that dictates everything from speed to the acceleration rate to the number of stops and starts.

Many of EPA’s assumptions in the 1975 test don’t measure up to modern driving.

For example, the highway test has a mandated average speed of 48.3 mph, and vehicles cannot exceed 60 mph. That maximum speed was based on the then-national speed limit of 55 mph, which was abandoned in 1995.

The tests were designed to simulate driving in Southern California, so laboratory temperatures must be 75 degrees Fahrenheit during both cycles. Using air conditioning is prohibited because it was not common in the 1970s. Today, air conditioning uses an estimated 5.5 percent of a vehicle’s annual fuel.

And while many experts put real-world acceleration rates for passenger vehicles at 9 or 10 mph per second, both cycles limit acceleration to less than 4 mph per second because 1970s dynamometers couldn’t withstand anything greater.

In other words, the two-cycle test does not include many of the driving habits — acceleration, speed and air conditioning — that today represent some of the largest contributors to fuel consumption.

The test was initially developed for both determining CAFE standards compliance and creating fuel economy rating labels, which told consumers the mileage they could expect for city and highway driving.

Drivers began complaining about the fuel economy labels shortly after the testing began.

EPA can’t change how to test CAFE compliance because the Energy Policy and Conservation Act requires that the methodology "shall be the procedures utilized by the EPA Administrator for model year 1975 … or procedures which yield comparable results."

But the agency can change what it tells car buyers. So in 1984, EPA stopped writing the test results on ratings labels and instead adjusted down 10 percent for city driving and 22 percent for highway driving.

But the complaints kept coming, so the agency changed the ratings test in 2006, adding three additional test cycles to represent aggressive driving, cold climates and use of air conditioning for calculating just the fuel economy labels.

In its rulemaking, EPA laid bare the shortfalls of the original 1975 test, which it still must use for CAFE compliance.

"A fundamental issue with today’s fuel economy estimates is that the underlying test and calculation procedures do not fully represent current real-world driving conditions," the 2006 rulemaking states.

"Some of the key limitations are that the highway test has a top-speed of only 60 mph, both the city and highway tests are run at mild-climatic conditions, both tests have mild acceleration rates, and neither test is run with the use of fuel consuming accessories such as air conditioning."

While EPA believes its new test is better, the agency cannot lobby Congress for permission to use it in the CAFE program.

But Congress hasn’t formally requested EPA’s input on the tests, despite amending the Energy Policy and Conservation Act in 1984, 2005 and 2007. So the provision limiting the CAFE program to the 1975 test remains unchanged.

In the meantime, EPA has decided to use the two-cycle test even when it hasn’t had to.

In 2009, after Obama signed an executive order mandating that EPA create CAFE standards for carbon dioxide emissions, the agency was not tied to the outdated protocols because greenhouse gases were not part of the original program.

In its 2012 rulemaking on the issue, EPA acknowledged that the CAFE compliance test "cannot capture all of the real world emissions because the [Energy Policy and Conservation Act] currently requires EPA to use 1975 passenger car test procedures under which vehicle air conditioners are not turned on during fuel economy testing."

Still, EPA said using the new test was "not feasible" because there was not enough data on how emissions reduction technology might perform on the extra three cycles.

Ultimately, the agency decided on a "harmonized approach," using the 1975 methods for all CAFE testing.

"A harmonized approach may help mitigate the costs to manufacturers of having to comply with multiple sets of federal and state standards," the rulemaking states.

Indeed, carmakers have been strong supporters of the two-cycle test.

But the gap between the new and old tests is only expected to increase as vehicles become more efficient, according to a report last year from the National Academy of Sciences.

When cars use less fuel, energy-draining accessories like air conditioning account for a greater percentage of fuel consumption.

And while EPA generally says there is a 20 percent difference between the 1975 two-cycle test results and the new test, it says the gap is 30 percent for hybrids.

Other technologies can perform unrealistically well on the two-cycle test. Turbocharged engines, which EPA and NHTSA have previously pointed to as a primary means of automakers achieving CAFE standards, are far less efficient when subjected to aggressive driving.

The National Academy of Sciences found higher speeds and acceleration rates can cause a turbocharged engine to consume more fuel than traditional aspirated engines.

Environmentalists fear that different testing protocols allow automakers to game the system, getting credit for technologies that do well on the two-cycle test but that don’t see the same fuel economy improvements on the new test or in the real world.

"Manufacturers are adept at designing to the test and taking advantage of well-known weaknesses of the test," said Therese Langer, transportation program director at the American Council for an Energy-Efficient Economy. "If you move to a test protocol that would test for more types of driving circumstances that people engage in in the real world, you are going to reduce those loopholes."

Having two methods for measuring one thing, fuel economy, can also be confusing.

"When people hear we are overstating fuel economy in CAFE by 20 percent, it does undermine their confidence in the program," said Dan Becker, director of the nonprofit Safe Climate Campaign. "The decisionmakers are told that the cars are more efficient than they are, and consumers are upset because they don’t get the mileage they think they should."

Brett Smith, at the Center for Automotive Research, agrees.

"It clearly adds a level of confusion that just doesn’t need to be there," he said. "Consumers don’t have a clue about how this works, and it shouldn’t be so hard to figure out your car’s mileage."