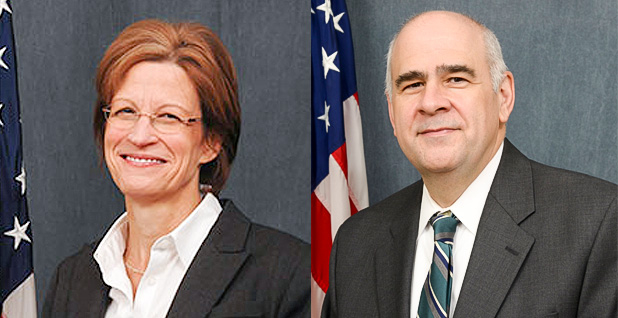 Richard Cardinale, the Bureau of Land Management’s acting deputy director of operations, is out after a 60-day stint overseeing the day-to-day operations of the federal government’s largest land management agency.

BLM today confirmed to E&E News that Margaret Schneider, the bureau’s assistant director of business, fiscal and information resources management, started yesterday as acting BLM deputy director of operations — a position that oversees daily operations of the agency’s nearly 10,000 employees who manage about 245 million acres of federal land, mostly across the West.

Schneider served as deputy director of the Bureau of Safety and Environmental Enforcement before joining BLM last year. Schneider also worked for three decades at EPA, where her roles included principal deputy assistant administrator for the agency’s Office of Environmental Information.

In that position, she managed the national budget, security, information technology, acquisition and management issues, according to information provided by BLM.

"Margaret is a well-respected career executive with more than 30 years of federal experience," Heather Feeney, a BLM spokeswoman, said in an email.

Cardinale, who is still listed as acting deputy director of operations on BLM’s online organizational chart, has returned to his previous position as the director of the Business Operations Division in the Interior Department’s Office of the Chief Information Officer, Feeney said.

Schneider will remain in the acting deputy director’s position "until a permanent selection is made," Feeney said.

But in a move that surprised some senior officials, BLM placed an online want ad on the federal government’s USAjobs website seeking applications for the deputy director of operations position full-time.

The annual pay starts at $164,200, though it could start as high as $189,600, depending on experience and other factors, according to the ad. "No previous Federal Service is required," it adds.

An overview of the position notes that the deputy director of operations provides "overall policy direction for the Bureau’s national-level, multi-use land management programs, operations, and activities."

"These responsibilities require competency in the fields of administration and management," the ad says.

Several current and former senior Interior Department sources said they were surprised by the general job advertisement for such a critical position, noting that usually, a BLM state office director — or a senior Interior official, such as Cardinale — is asked to fill the position.

"Advertising the Deputy Director-Ops is something I do not recall ever happening," a former senior Interior official, who asked not to be identified, said in a text message.

Two other current senior Interior officials, both of whom asked to remain anonymous, said no state BLM directors have been asked to apply for the position, which makes advertising the job so unusual, one of the senior officials said.

"Usually a [deputy director] is selected by the [BLM] Director, and it’s typically a hand pick by them" with the Senior Executive Service-level official "accepting a reassignment," the senior official said. "That’s how all the [deputy directors] I can remember were appointed."

Feeney, however, said advertising the position in USAjobs was done in an effort to cast the widest possible net for qualified candidates both within and outside the federal government.

"The ad was done to announce this job is open to applicants to fill permanently, and that will include BLM employees, state directors," she said. "Advertising the job in USAjobs is the best way to do that."

But some say it shows a lack of respect for BLM’s current senior leadership.

"This administration has been pretty clear that they don’t like the standing SES core at BLM — too old, too embedded in the ‘old’ BLM ways," the source said. "They want new blood from outside. It’s really sad and hard to watch."

Cardinale’s departure was not unexpected; he was on a 60-day acting stint at the bureau (Greenwire, June 11).

Still, an Interior source said at the time that it was hoped that Cardinale would be "a good fit" and take the job on a permanent basis.

Another BLM source disputed that, saying "he was very clear that his detail would be only 60 days long when he came in early June."

"Rich told me from day one that he was only in that job temporarily," said Shepard, who has been friends with Cardinale for years.

Shepard, who retired from BLM in 2012 after a 38-year career, said he talked with Cardinale less than two weeks ago, and "he was busy doing a lot of meetings with the department and acting director, and I didn’t sense any issues."

Regardless, the fluctuation in agency leadership comes at a time of uncertainty for some at BLM.

Steed is now listed on BLM’s organizational chart as deputy director of policy and programs, "Exercising the Authority of Director."

In addition, Zinke is working on a plan with senior agency officials they expect to finalize by year’s end to move the agency’s headquarters out of Washington to a city in the West.

Sources have said Grand Junction, Colo., and Salt Lake City are the top contenders, although Denver; Albuquerque, N.M.; and other cities remain under consideration.

Zinke, during a visit to Colorado last week, said it makes sense to move BLM and potentially other Interior bureaus out West, where most of the federal land they manage is located. He also said moving BLM headquarters to a place with a lower cost of living than Washington would improve the quality of life for agency employees (Greenwire, Aug. 6).

Meanwhile, seven of the 12 BLM state office directors overseeing tens of millions of acres of federal lands across the West are serving on an acting basis.

Their lack of tenure has quietly raised concerns among some senior staff — and members of Congress — about the accountability of those state directors.

Nevada Rep. Mark Amodei (R) was upset earlier this year by BLM’s decision to reassign the agency’s popular state director there, John Ruhs, to another post out of the Silver State and replace him with an acting director (E&E Daily, May 9).

"The problem is … you’ve got a guy who’s in there temporarily, who’s in a pretty key position," Amodei said at the time. "And so we moved the guy out who was permanently assigned, and we got a detail."