Wanted: Republicans for a cap‑and‑trade vote 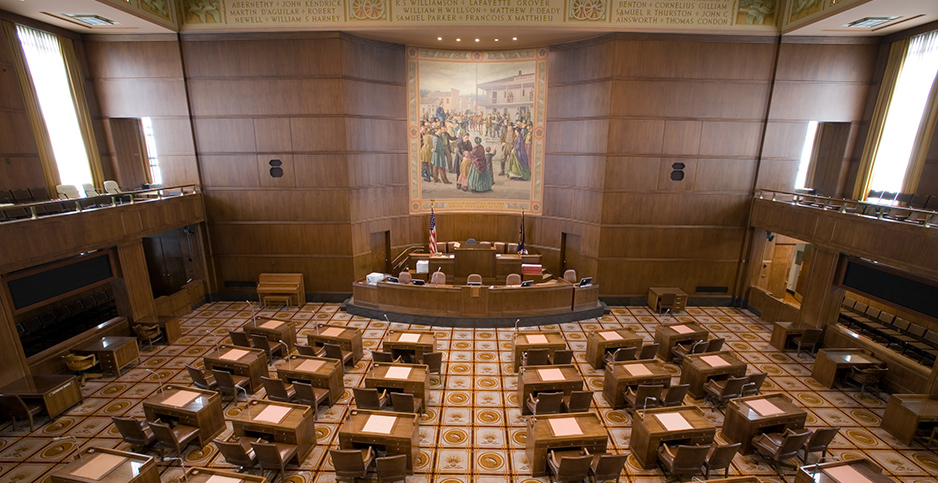 Oregon’s Republican senators are on the lam.

Gov. Kate Brown (D) yesterday directed the state police to round up 11 members of the state Senate’s Republican caucus, who fled Oregon in advance of a vote on a carbon cap-and-trade bill. The maneuver denied the Senate a quorum, preventing a vote on a piece of legislation that seemed certain to pass.

The showdown underlined the stakes of the vote, and not just for Oregon. The bill would cap carbon emissions at 45% of 1990 levels by 2035 and 80% by 2050. Just as importantly, it would pave the way for Oregon to join California’s cap-and-trade system, making it just the second state with an economywide emissions reduction program (Climatewire, May 30).

The political fireworks erupted after a breakdown in negotiations Wednesday. Cap and trade is a priority for Brown and Democratic legislative leaders, who command a supermajority in Salem, the state capital. They argue that the bill would slash emissions, raise money for electrification and resiliency projects, and spur a green energy economy.

"This bill would be historic in terms of Oregon would be the second state in the entire nation to move forward on a comprehensive cap-and-invest strategy," Brown said yesterday during a press conference, flanked by a group of high school students. "Now is the time for the Senate Republicans to show up and do the job that Oregonians elected them to do."

But the proposal is anathema to Republicans, who contend that the bill would do little to cut carbon while saddling Oregonians with higher energy costs and devastating the state’s agricultural and timber industries. They view a provision in the legislation that would block a voter referendum particularly galling.

One Republican senator, Brian Boquist, warned that he might shoot at state troopers if they attempted to take him back to Salem. He said police should "send bachelors and come heavily armed."

It’s the second time Republicans have walked out during this legislative session. A business tax for public schools and several other Democratic priorities, including cap and trade, prompted a similar display from GOP lawmakers earlier in the year. Republicans say Democrats agreed to a reset on cap and trade as part of a deal to get GOP lawmakers to return, but they ultimately failed to do so. On Wednesday, they rallied with a convoy of logging trucks to protest the legislation.

"We believe that doing our constitutional duty is to push back on damaging legislation that’s going to cost thousands of jobs in the state and raise gas prices 22 cents a gallon and raise natural gas prices by over 50%," said state Sen. Tim Knopp, one of the 11 Republicans on the run.

"So to us we are supporting working families, and we’re supporting blue-collar jobs in this state," he added. "The Democrats are trying to eliminate them, and we’re just not going to stand by and allow that to happen and we’re gonna fight. And they may ultimately steamroll us, but we’re not going down without a fight."

Republicans have little hope of winning the battle. The bill had already passed the House and, despite some grumbling from some Democratic senators, appeared poised to clear the upper chamber, as well.

The bigger question is whether the GOP can win the wider war. It has two potential options. One is a legal challenge in the state Supreme Court. State law requires transportation revenue to be spent on roadways. Whether cap-and-trade revenues generated by transportation would be subject to the provision is unclear (Climatewire, March 18).

The second front is at the ballot box. While opponents would not be able to pursue a referendum if the legislation passed, they could attempt a ballot initiative. The two processes are similar but have a key distinction under Oregon law. If opponents of the measure gathered enough signatures for a referendum, all state work on cap and trade would have to stop until voters had their say. But work on cap and trade could continue during an initiative campaign.

"We hope to get the public’s attention about the bill because we believe a lot of the public doesn’t even know that it’s happening," Knopp said.

Democrats dismiss that argument. Cap-and-trade legislation has been in the works for the better part of a decade in Oregon, and Brown ran on a pledge to implement cap and trade, they note.

The current bill has already been adapted to address business concerns. Electric utilities would receive free credits for nine years under the proposal in recognition of their efforts to decarbonize. The provision has helped transform utilities from foes into champions of the legislation (Climatewire, June 11).

And Democrats reject arguments that rural Oregon will lose out. Cap and trade will raise money to help farmers and loggers prepare for intense drought and wildfire, they contend.

"I mean to a certain extent, I hate to say it, but this is life in the Trump era really," said state Sen. Michael Dembrow, a Democrat who has championed the legislation. "We see this sort of questioning of democratic institutions. The norm that you come to work and, you know, you try to get enough votes to pass your bills, you negotiate, you compromise, and then at the end of the day, having done the best you could, you vote. And that’s the norm of this institution, and there’s just not respect for it."

Dembrow said he welcomed a public vote on the measure, saying the bill reflected Oregonians’ desire to act on climate change. But he said Senate Democrats would not give in to their counterparts.

"We are very united and determined to stick this out and not compromise the climate action bill in order for this to end," Dembrow said. "The worst thing that can happen is that this kind of flaunting of institutional policy and values is rewarded in any way."