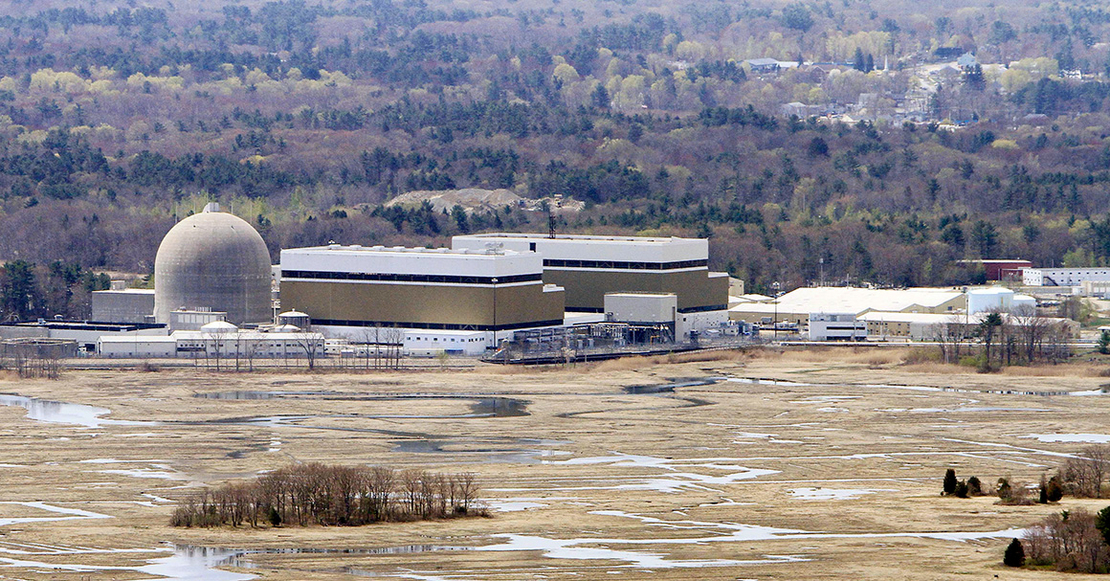 For five years, two of the world’s largest power companies have been locked in an all-out battle over the future of New England’s electric grid. The outcome could determine the fate of the region’s decarbonization efforts for decades.

The fight pits Avangrid Inc., a subsidiary of the Spanish power giant Iberdrola, versus NextEra Energy Inc., the most valuable power company in America. It effectively is a contest between hydro power — generated by dams in Quebec and carried on a 146-mile transmission line built by Avangrid across Maine — versus a large nuclear plant operated in New Hampshire by NextEra.

The two companies have poured tens of millions of dollars into a ballot referendum in Maine, waged legal battles in two state supreme courts and are engaged in an ongoing struggle at the Federal Energy Regulatory Commission.

Only one low-carbon resource may survive.

Today, the transmission line’s future is hanging by a thread after Maine voters overwhelmingly supported a NextEra-backed ballot measure to halt the 146-mile project. Avangrid is appealing the constitutionality of the vote.

“We’re in a world in New England where the states have put a stick in the ground to decarbonize. They need all hands on deck from Canadian hydro, existing nukes, offshore wind and other renewables to do that,” said Susan Tierney, a former Massachusetts utility regulator who served on the Obama administration’s Energy Department transition team. “And that is disruptive to New England power markets.”

Avangrid and NextEra each are a green giant in their own right. Florida-based NextEra had 21 gigawatts of wind and solar installed at the end of 2020. Avangrid operates about 8.5 GW of renewables in the United States. Iberdrola, its parent, has a global renewable fleet of 23 GW. The six New England states, by comparison, have installed roughly 3 GW of wind and solar.

But the fight between the pair concerns more controversial forms of low-carbon power: hydro and nuclear.

The struggle can be traced to increasing efforts to green the region’s electric grid. Power plants in the six-state region compete in a wholesale power market to sell their electricity. But in recent years, as frustration over the pace of decarbonization has mounted, a collection of New England states has opted to award long-term clean energy contracts at a fixed cost, effectively bypassing the market.

Connecticut, Rhode Island and Massachusetts utilities signed deals to buy large quantities of offshore wind. In 2019, Connecticut handed a 10-year contract to Millstone nuclear power station after the operator of New England’s largest power plant warned it could close. And Massachusetts awarded a 20-year deal to Hydro-Quebec in 2018 to supply electricity delivered via a 146-mile power line to be built by an Avangrid’s subsidiary, Central Maine Power Co.

The hydro line has the potential to be transformative for the region. It would annually deliver 9.45 terawatt-hours of electricity, or about 18 percent of Massachusetts power demand, reducing the region’s reliance on natural gas. In 2019, Bay State regulators estimated it would cut a cumulative 36 million tons of CO2 by 2040. Total New England power plant emissions were 23 million tons in 2020, according to EPA data.

But the project has generated howls from existing power plant owners, who say it could suppress wholesale power prices and unravel the region’s market.

“It carves up the market in wider segments, where it creates winners or losers. If you lock in for 20 years at an above-market price, you’re clearly a winner,” said Dan Dolan, who leads the New England Power Generators Association, a trade association representing power plant owners. “If you have to fight it out in the market, you have a dwindling market.”

Environmentalists say the states have little choice but to offer long-term contracts for clean energy: The market has failed to cut emissions at a level needed to meet state climate goals. There’s also this — the Federal Energy Regulatory Commission, not state officials, is charged with regulating the six state market overseen by ISO New England Inc., the regional grid operator.

“The system we have is old. It’s the grid, the decisionmaking system. It’s all of it,” said Sarah Jackson, a former electricity analyst who now works at the Nature Conservancy. “I think there are a lot of people trying to change all of these pieces, including the states, who are struggling to figure out how to meet their goals.”

NextEra goes on the attack

NextEra quickly emerged as a leading opponent of the hydro line. It operates a handful of power plants in New England, the largest of which is Seabrook Station. The New Hampshire nuclear facility regularly ranks as the second-largest electricity generator in the region. Increasingly, Seabrook is one of the few large plants in New England without a long-term state contract to sell its electricity.

And so NextEra went on the offensive.

In Massachusetts, it fought Avangrid and Hydro-Quebec’s contract at the state Department of Public Utilities, arguing the deal failed to guarantee the emission reductions sought by the state. It lost and appealed to Massachusetts’ highest court, where it lost again. In Maine, NextEra challenged the public need for the line. When it lost at the Maine Public Utilities Commission, it appealed to the state’s highest court, where it lost again.

Even as it waged a legal battle against the transmission line’s power contract, NextEra was seeking a similar long-term deal for Seabrook.

In 2019, the company dispatched representatives to Massachusetts to lobby lawmakers and officials in Gov. Charlie Baker’s (R) administration, according to four people familiar with the company’s outreach efforts.

Seabrook faced an uncertain financial future if the transmission line were built, NextEra representatives told Massachusetts officials, arguing the nuclear facility’s closure would represent a dramatic blow to the state’s climate goals. The company asked state officials to consider a new clean energy contract that a nuclear facility could win.

But NextEra received a cool reception from lawmakers and administration officials. Several officials who heard the pitch acknowledged nuclear power likely would be needed to meet the state’s net-zero climate goals, but were surprised to hear NextEra lobbying for the type of contract it was trying to kill in court.

“I said look, I’m not going to tell you anything because you’re putting a gun to the head of Massachusetts policymakers, which is a nonstarter,” said one Beacon Hill source, recalling a meeting with the company.

NextEra did not respond to requests for comment. A spokesman for the Baker administration also declined comment.

With its lobbying and legal efforts bearing little fruit, NextEra turned its attention to the ballot box. The transmission line had become a lightning rod for controversy in Maine, where it had sparked opposition from landowners and conservation groups against cutting about 50 miles of new transmission corridor through the north Maine woods. National environmental groups such as the Sierra Club piled in, arguing hydro was not the solution to the region’s climate needs.

The opposition came as Avangrid faced a consumer revolt in the state. Central Maine Power, an Avangrid transmission and distribution utility, has been plagued by reliability and billing challenges, among other issues. The company’s reputation suffered so much that Maine lawmakers passed a proposal to force a buyout of CMP and create a consumer-owned utility. It was vetoed by the governor.

But an initial referendum seeking to overturn the hydro line ran aground after Maine’s top court ruled it was unconstitutional. A second crack at the ballot box soon presented itself when a lower court judge overturned Avangrid’s permit to cross two parcels of public land.

The most expensive ballot referendum in Maine history was on.

NextEra contributed $20 million supporting the referendum, dwarfing the contributions from fellow opponents Vistra Corp. and Calpine Corp, which chipped in $2 million each. Avangrid and Hydro-Quebec put up more than $40 million to fight the question, according to Maine Ethics Commission filings.

The outcome was overwhelming: Nearly two-thirds of Maine voters supported the question, effectively killing the line.

Now it was Avangrid’s turn to scramble. The company, which had begun work on the power line, filed a lawsuit challenging the constitutionality of the vote. Opponents implored the state to suspend the company’s permit, putting Maine Gov. Janet Mills (D) in a bind. Mills supports the project, but she asked the company to halt work out of respect for the will of Maine voters. The project’s permit was subsequently suspended, and work has stopped as the court case plays out.

Meanwhile, the two companies continue to fight at FERC. The dispute is technical, but analysts say the outcome of the case has far-ranging implications for the ability of new power projects to plug into the New England grid.

Avangrid and NextEra have been at loggerheads over an upgrade to a circuit breaker at Seabrook. ISO New England said the upgrade was needed to accommodate the additional electricity flowing into the region from the hydro line.

Avangrid argues NextEra has used the upgrade as an opportunity to stymie the transmission line, alleging NextEra even offered to drop its opposition to the project if Avangrid agreed to a 20-year contract to buy power from Seabrook. NextEra has called that allegation “nothing more than unsupported innuendo” and claims the case simply centers on how much it should be compensated to cover the cost of the work.

Utility watchdogs said they were concerned NextEra could be using its market power to block a competitor from entering the market.

“This does have the potential to be precedent-setting, and the commission should treat it as such,” said Tyson Slocum, director of Public Citizen’s Energy Program. “We have to make sure we are not allowing companies in these power markets to erect artificial regulatory barriers to competition.”

Massachusetts Attorney General Maura Healey (D) echoed the concern in a letter to the commission, writing, “The fact that in this case a direct competitor of [New England Clean Energy Connect] can thwart a major transmission project simply by refusing to negotiate and agree to commercially reasonable terms manifests a weakness in the interconnection process that must be addressed.”

FERC was sufficiently worried about the issue that it asked ISO New England in a preliminary ruling to explain its interconnection rules, saying it was concerned the regulations were unjust and unreasonable.

New England’s climate efforts might be the biggest loser in the fight between the two companies. In 2020, Massachusetts officials conducted a comprehensive analysis of how to achieve net-zero emissions by 2050.

The state considered eight energy pathways to the goal, ranging from scenarios where renewables such as rooftop solar or offshore wind boomed to those with increased cooperation between Northeastern states and provinces.

Seven of the eight pathways called for maintaining New England’s existing nuclear fleet; the sole exception is a 100 percent renewable scenario where nuclear was banned. All eight called for more transmission lines linking the region to Quebec’s network of hydro facilities.

“Like other regions that want a low-carbon energy future, New England’s electricity market structure is going to face big tests,” Tierney said. Speaking of Avangrid and NextEra, she added, “This one is a harbinger of those future fights.”