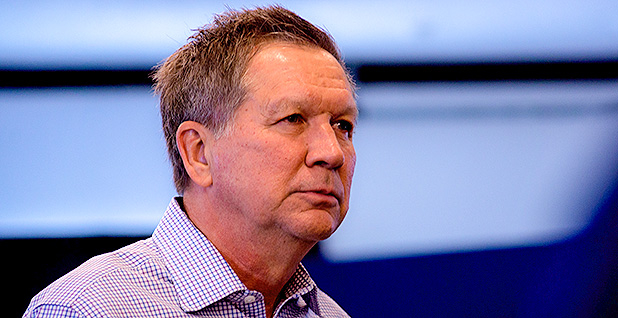 The Ohio General Assembly is tussling yet again over the Buckeye State’s clean energy standards.

Industrial groups, fossil fuel interests and conservative groups are leading a push for the Legislature to relax Ohio’s renewable and energy efficiency standards. They maintain the current requirements are costly, market-distorting mandates. But renewable companies, environmentalists and a collection of big-name corporations — including Whirlpool Corp. and Dow Chemical Co. — are defending the standards as cost-cutting, pollution-slashing, job-creating incentives.

A Senate committee heard testimony yesterday on a bill that would make Ohio’s renewable and energy efficiency requirements optional. The proposal passed the House by a 65-31 margin in March.

"The proposed legislation would stifle the growth of the advanced energy industry in Ohio and drive a $10 billion market opportunity to neighboring states while driving up the cost of electricity for all Ohio consumers," Ray Fakhoury, state policy associate at Advanced Energy Economy, a green business association, said in written testimony to the Ohio Senate Energy and Natural Resources Committee.

"Mandates will give the renewable stuff a bad name eventually. It’s just a question of time," said Samuel Randazzo, an attorney representing the Industrial Energy Users-Ohio. He argued mandates hinder innovation and hamper the progress of renewables. Small businesses, he said, should also enjoy an opt-out from the state’s efficiency standards that larger consumers already enjoy.

"People like idea of renewables, but don’t like the idea of government imposing it on them," Randazzo said in an interview.

If the debate sounds familiar, that’s because it is. H.B. 114, as the measure is known, is an extension of the bitter fight that divided Ohio Republicans last year, when Gov. John Kasich (R) vetoed an Assembly plan to neuter the standards (Greenwire, Dec. 27, 2016).

The stance represented something of a reversal for Kasich. In 2014, Kasich signed off on a two-year freeze of the requirements. Kasich’s position this year is unclear, and it remains an open question if opponents of the standards have the votes in the Senate to override a veto.

Ohio’s current standards, passed in 2008, require the state’s power companies to generate 12.5 percent of their electricity from renewable sources by 2027. Utilities must boost their efficiency 22.5 percent by the same year.

The debate over renewables comes against the backdrop of a rapidly changing energy landscape in the Buckeye State. Ohio power companies have invested $10 billion in nearly a dozen new natural gas facilities, endangering the state’s aging coal fleet (Energywire, Sept. 14).

Lawmakers in Columbus are also entertaining a proposal to provide financial assistance to a pair of coal plants owned by Ohio Valley Electric Corp. (Energywire, Oct. 13). The facilities are owned by a consortium of power companies.

Conservative groups like Americans for Prosperity, an advocacy group funded by the Koch brothers, have long sought a repeal of Ohio’s renewable standards, saying they undermine the market for coal generators.

"Ohio should not sacrifice hundreds or even thousands of jobs per year in the state’s traditional industries in order to benefit a small cadre of ‘green’ job holders," Micah Derry, Americans for Prosperity-Ohio director, said in testimony to the House.

He pointed to a study by the Buckeye Institute, a free market think tank, which found the standards could cost Ohio as many as 134,100 jobs and $15.5 billion in gross domestic product by 2026.

Greens have their own numbers. Buckeye State ratepayers have saved $1 billion on account of the efficiency standards while Ohio is now home to more than 100,000 clean energy jobs, said John Finnigan, an attorney at the Environmental Defense Fund. The state can ill afford to ax the standards if it hopes to lure Amazon.com Inc. to Cleveland or Cincinnati, he said, which are both in the running to host the technology giant’s headquarters.