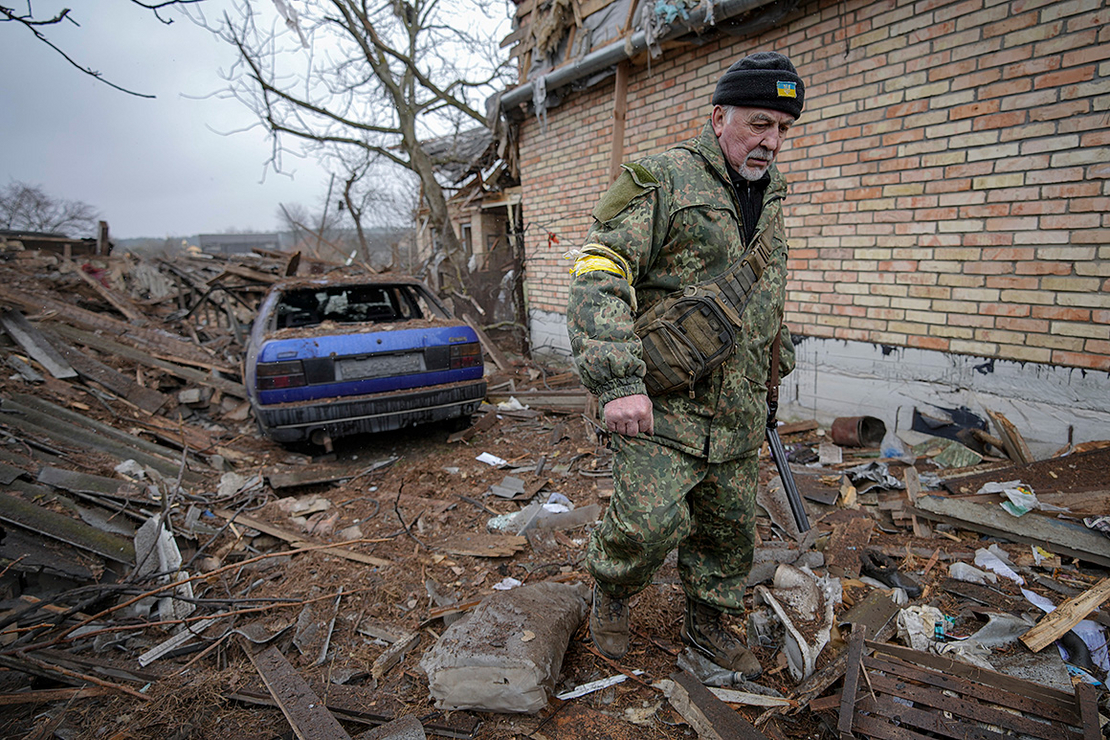 Andrey Goncharuk, 68, a member of territorial defense, walks yesterday in the backyard of a house damaged by a Russian airstrike, according to locals, in Gorenka, outside the capital Kyiv, Ukraine. AP Photo/Vadim Ghirda

The Biden administration moved to restrict energy technology exports linked to Russia yesterday as fallout from the war in Ukraine widens and U.S. and European companies are forced to make high-stakes decisions about their assets.

The invasion by Russia has spurred oil supermajors to back out of deals and created questions about uranium supplies for nuclear power plants.

When asked if he would consider banning imports of Russian oil yesterday, President Biden said “nothing is off the table.” Sen. Joe Manchin (D-W.Va.) is among those pushing a potential ban.

The Commerce Department will “impose restrictions on technology exports that would support Russia’s refining capacity over the long term,” according to a fact sheet from the White House. That came a day after Biden, in his first State of the Union address, said “Russia’s economy is reeling” and Russian President Vladimir Putin “alone is to blame.”

Jean-Pierre said the United States doesn’t have “a strategic interest in reducing the global supply of energy.”

“We and our allies and partners have a strong collective interest to degrade Russia’s status as a leading energy supplier over time,” Jean-Pierre said to reporters. “That’s why we’ve been talking about diversification … and that’s why we shut down Nord Stream 2.”

The Nord Stream 2 pipeline was built to carry gas from Russia to Germany. The U.S. imposed sanctions on the company’s Russian owners when the war started and Germany refused to allow the pipe to begin operations.

U.S. and European countries have slapped economic sanctions on Russian banks and business leaders in response to the country’s invasion of Ukraine, although they’ve taken pains to avoid directly stopping Russia’s exports of oil and natural gas.

Oil prices have climbed steadily since the war broke out last month, with the benchmark for U.S. crude hitting more than $110 a barrel yesterday, up from about $91 a barrel before the war started. Natural gas prices in Europe, which gets about 35 percent of its supply from Russia, have climbed more than 60 percent during the same time.

Western oil companies, including Exxon Mobil Corp., have announced they’re walking away from oil and gas projects in Russia, under pressure from investors and out of concern that the sanctions could be widened to include energy development (Energywire, March 2).

A State Department spokesperson told E&E News yesterday that no option is off the table when it comes to the energy sector, but that U.S. sanctions are designed to harm the Russian economy, not the U.S. economy.

Also yesterday, Manchin’s office confirmed that he and Sen. Lisa Murkowski (R-Alaska) are planning to file a bill that would prohibit the import of Russian crude oil, petroleum products and liquefied natural gas into the United States.

A one-page draft summary of the bill shared with E&E News said the legislation declares “a national emergency with respect to Russian aggression against Ukraine and the threat to our national security, foreign policy, and economy and directs the President to the authority he has had since 1917 to prohibit imports of crude oil, petroleum, petroleum products and [liquefied natural gas] from Russia.”

Meanwhile, more details are emerging after Exxon’s announcement this week that it is stepping back from its last operations in Russia. Texas-based Exxon owns 30 percent of the Sakhalin-1 project, which produces oil and gas from an island off Russia’s Far East coast, and operates it on behalf of a consortium of Russian, Japanese and Indian companies.

Exxon only gets 1 to 2 percent of its earnings from Russia, CEO Darren Woods said yesterday during the company’s 2022 investor day.

However, sanctions on Russian banks and limits on Russian exports mean the project will have to be shut down to keep its facilities from deteriorating, Woods said. Exxon, as the operator, will be responsible for that work.

“That will be a very thoughtful process, working with our [partners] to make sure that that operation is handed over successfully and without incident,” Woods said.

The American Petroleum Institute has urged the Biden administration to speed up approvals of U.S. export terminals, to help diversify Europe’s energy mix.

War in Ukraine is affecting more than the oil and gas sector in the U.S.

The Nuclear Energy Institute, the trade group for a number of nuclear plant operators, has urged the Biden administration to keep uranium sales exempt from sanctions, as Russian forces continue to move into Ukraine, according to a report this week from Reuters, which cited sources familiar with the matter.

NEI did not independently confirm that information with E&E News. In a statement, the organization said that U.S. electric companies get their nuclear fuel supply from a variety of companies and countries.

“While Russia is a significant global supplier of commercial nuclear fuel, U.S. utilities contract with a world-wide network of companies and countries for their fuel requirements to mitigate the risks of potential disruption,” Nima Ashkeboussi, senior director of fuel and radiation safety at NEI, said in a statement sent to E&E News. “We are closely monitoring the situation and are not aware of any impacts to U.S. utility fuel deliveries at this time.”

The United States relies on Russia and its allies Kazakhstan and Uzbekistan for roughly half of the uranium powering its nuclear plants — about 22.8 million pounds in 2020 — which in turn produce about 20 percent of U.S. electricity, according to data from the U.S. Energy Information Administration and the World Nuclear Association.

The issue is being framed as a pocketbook one. Rising energy costs have become a polarizing issue amid inflation and Russia’s invasion of Ukraine, leading some to argue that Russian imports of uranium are needed to keep electricity prices low.

But experts say the issue is not about prices or sanctions. It’s about fueling a longtime push from the U.S. nuclear industry to develop a domestic supply chain for commercial fuel and a uranium reserve.

In a statement, NEI said it supports such measures.

“Currently, conversion and enrichment capabilities in the US do not fully meet the needs of our fleet of reactors. We must import fuel from abroad to ensure communities across the country continue to have access to affordable and reliable energy,” Ashkeboussi said in a statement

The U.S. power sector has emphasized the importance of nuclear in meeting the nation’s net-zero carbon goals. This includes extending the operating life of existing reactors and developing next-generation technologies that can be used as early as the next decade.

The White House did not respond to E&E News’ request for comment about nuclear industry lobbying to prevent sanctions on Russian uranium imports.

“We are listening to all inquiries from industry and will continue to do so as we take measures to hold Russia accountable,” a White House official told Reuters when asked about the uranium lobbying.

“Constellation is deeply saddened by the events in Ukraine and we support U.S. and international efforts to bring the war in Ukraine to a halt,” the company said in a statement.

Both electric companies said they, as well as other operators, have a portfolio of contracts to buy nuclear fuel from a variety of international suppliers. Reactors also are able to run for 18 to 24 months at a time before a refueling, which insulates them from any immediate impact on operations.

“We continue to work with federal policymakers to incentivize the expansion of domestic sources of nuclear fuel services and to improve programs to mitigate the potential impact of any supply disruptions,” Constellation said.

State regulators also are weighing in on the Ukraine crisis.

Mississippi utility regulators on Tuesday directed the electric and natural gas companies they oversee to disclose any ties they have with Russia as well as a plan to sever them.

Brandon Presley, a member of the Mississippi Public Service Commission, asked the electric and gas companies to prepare to confidentially explain to the regulators by March 8 what, if any, connections they have, acknowledging that none may exist.

The request comes after a request from the state’s lieutenant governor that businesses stop buying Russian products, whether Vodka or paper clips.

“Many of you are heavily reliant on natural gas, we know that gets exported at times, we want to know what that looks like,” Presley said at the conclusion of the Mississippi PSC’s meeting. “It’s incumbent upon regulated utilities that have a monopoly status [to] do it; you have a week to do it, it shouldn’t too much of a lift.”

“The threat for cyber intrusion from Russia is becoming more of a possibility; the energy grid is not the only vulnerable asset,” he said. “At the PSC, we are charged to do more. We must focus on efforts on mitigation of risks and vulnerabilities as they apply to the electric grid and natural gas pipelines.”