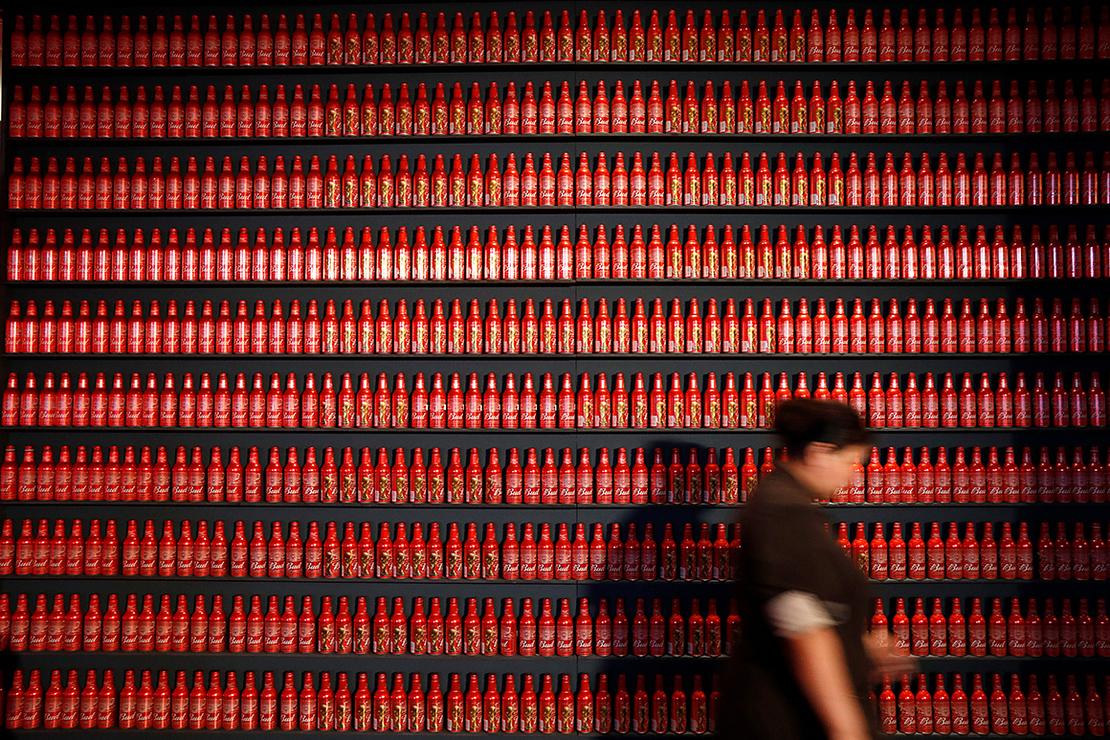 An employee walks past a wall lined with Budweiser cans in the InterContinental hotel in Moscow during the World Cup in 2018. AP Photo/Rebecca Blackwell

The Russian invasion of Ukraine could derail efforts to decarbonize major industries reliant on one of the world’s most carbon-intensive metals — aluminum.

From beverages and packaging to cars and construction, the world economy counts on a steady supply of aluminum products to survive. As those industries have sought to lower their planet-warming emissions, some firms have struck deals with En+ Group IPJSC, a Russian company that’s become one of the world’s largest producers of low-carbon aluminum.

As the conflict in Ukraine unfolds, however, the climate-centric relationships En+ has built with other companies are in danger of falling apart.

“[Russia] is such an important part of the green supply chain in aluminum, and I don’t see a way out of that conundrum,” said Uday Patel, a principal analyst at Wood Mackenzie. If the turmoil surrounding Russian resources is unresolved by “the middle of this year,” Patel said, “there is the potential for a reversal of trying to lower carbon in our consumer products.”

Global aluminum production releases more carbon into the atmosphere than most other industries because many smelters around the world still rely on coal and gas. Many experts believe that cutting the carbon footprint of aluminum will be necessary to meaningfully reduce emissions and slow the pace of global warming.

En+ boasts that it is the “largest producer of low-carbon aluminum,” with more than 15 gigawatts of hydropower capacity. Patel estimated the company produces 15 to 20 percent of “green” aluminum products available to companies in the marketplace.

Over the last few years, En+ has sought to offer solutions to the dirtier sides of manufacturing, inking supply agreements with companies vying to be on the cutting edge of climate action.

But with war breaking out in Europe, companies outside Russia are cutting off those relationships. Patel said En+ is “going to find it very hard to do business” and any company that was planning on progressing toward a net-zero goal using “green aluminum” will need to pay more than they normally would.

“You’ve got an unholy mess in the market,” Patel said.

“We’re excited about this pilot, made possible thanks to the collaboration with our partners and this amazing technological breakthrough, and we look forward to being able to roll it out even further,” Mauricio Coindreau, the group’s sustainability director, said when the pilot project was unveiled.

Budweiser cited the plans when it announced in December that it would try to achieve net-zero carbon emissions across its entire value chain by 2040.

At the time, En+ may have made sense as a business partner in climate action. With ample access to hydropower, the company says it already can produce aluminum that is five times less carbon intensive than the global industry average.

It is also working on a process to replace the carbon anodes currently used to break alumina into aluminum and oxygen with so-called inert anodes, which can conduct electricity without emitting carbon dioxide.

“Inert anode technology is seen as one of the more promising options for the industry for the years to come,” according to the United Nations Climate Technology Center and Network.

One of the company’s Russian aluminum smelters is using inert anodes to produce 2 metric tons of aluminum per day in its pilot plants. “It is expected that the technology will be ready for industrial scale implementation by 2030,” En+ said last September in a report on its net-zero plans.

The company also intends to produce 13,000 metric tons per year of green hydrogen using surplus hydropower capacity and is working with Cargill Ocean Transportation to investigate the potential impact of wind propulsion, according to the report.

Sanctions, an oligarch and the FBI

But En+ was a risky business partner for Budweiser to take on.

In 2018, the U.S. government sanctioned En+ and aluminum producer United Company Rusal IPJSC, in which En+ holds a majority stake. The move was in connection to the special counsel’s investigation into the 2016 presidential election.

Also sanctioned was Oleg Deripaska, a Russian billionaire and oligarch who led both Rusal and En+ at the time. The sanctions on En+ and Rusal were lifted after Deripaska reduced his ownership stake in the company and said he cut all connections to En+.

However, media reports suggest Western governments remained concerned about Deripaska and his control over the companies.

Bloomberg reported in December 2020 that European officials provided information to the U.S. government indicating the oligarch “continued to exert control” over Rusal, in violation of the sanctions agreement. A board member of En+, Christopher Burnham, denied the claim in an op-ed published in the same news outlet.

“I am happy to confirm that En+ Group remains fully in compliance with the Terms of Removal and that at no time have concerns been raised with us by OFAC [Office of Foreign Assets Control] or any other arm of the U.S. Treasury in relation to this article,” Burnham wrote.

Last October, NBC News reported that Deripaska’s Washington home was “swarmed” by the FBI. An agency spokesperson told the news outlet that the action was “connected to U.S. sanctions.”

Amid the Russian military invasion of Ukraine last month, according to media reports, Deripaska fled to Sri Lanka in a 72.6 meter yacht named Clio. On social media, Deripaska also broke from the ranks of other oligarchs, calling for an end to the war.

“Peace is very important! Negotiations need to start as soon as possible!” Deripaska stated in Russian on Sunday in a post to social media app Telegram, according to multiple media reports.

The U.S. and its European allies have not sanctioned En+ in relation to the war. In the U.S. specifically, most aluminum imported for consumption at home comes from Canada, according to the International Trade Administration.

Last week, Bloomberg reported the Biden administration “is holding off for now” on sanctioning aluminum supplies, citing “people familiar with the matter.” The White House did not respond to a request for comment about the Bloomberg article.

But in the United Kingdom, pressure is mounting for more action against En+. U.K. Defense Secretary Ben Wallace last week told the Daily Mail that Lord Greg Barker, the independent chair of the En+ board of directors, must step down from the company or resign from Parliament.

“I think Lord Barker should explain why he works with people like Deripaska,” Wallace told the Daily Mail.

Aluminum prices have risen on fears of supply curtailments. Yesterday, the three-month price for aluminum on the London Metal Exchange hit $3,552 per metric ton — a new record.

Patel said the war in Ukraine and its resulting fallout would be “a huge challenge” for other large companies besides Anheuser-Busch with climate goals who rely on aluminum.

There are other options in the marketplace for companies to buy aluminum with a minimal carbon footprint, Patel said. Investments in scrap recycling could provide an opportunity for more low-carbon aluminum production to come online and some coal- and oil-based smelters are trying out carbon capture to reduce emissions.

However, Patel said, industry innovation remains largely in an exploratory phase. By taking the Russians off the table, the conflict may “derail” progress for some large companies to achieve their long-term climate commitments by forcing companies to “end up using slightly higher carbon metal.”

“There is a short- to medium-term risk that the decarbonization goals set for 2050 go slightly off [path],” he said, adding their pathways to cutting emissions could “get reset again.”

Yet other experts think the international efforts to punish Russia economically could actually have an overall positive effect on global net-zero efforts.

“The rethink spurred by the Ukraine crisis and far-reaching recalibration of priorities has the potential to massively advance renewable energy, higher input costs notwithstanding,” said Michael Mehling, the deputy director of the Center for Energy and Environmental Policy at the Massachusetts Institute of Technology

“Germany is already considering a significant acceleration in the renewable energy planning and deployment,” Mehling said. “Geopolitics and security concerns have a way of leapfrogging the more mundane considerations of long-term costs and benefits.”

Not a happy hour

But for Anheuser-Busch, less than six months after its announced collaboration with En+, the promising climate collaboration has run its course.

Ana Zenatti, a spokesperson for Budweiser parent company Anheuser-Busch InBev SA/NV, told E&E News in an email, the “pilot project to produce the low carbon can has concluded and we have no ongoing contract with En+/Rusal.”

The project concluded according to the estimated timeline, Zenatti said, adding that Anheuser-Busch is “focused on supporting our Ukrainian colleagues and the humanitarian efforts for those affected” and remains committed to its previous climate goals.

Ball Corp., a can-making company that inked a similar deal with En+ last year, didn’t respond to a request for comment on the status of that partnership.

En+ declined to comment on ongoing relationships with companies outside of Russia amid the war in Ukraine.

The company’s “number one priority is the welfare and safety of our thousands of employees as their families living in the Ukraine,” En+ spokesperson Paul Cummins said in a statement. A Rusal plant that produces the aluminum feedstock alumina for En+ is located in the town of Mykolaiv in southern Ukraine, which was recently targeted by the Russian military.