Warming affects blazes, but not everywhere or every time 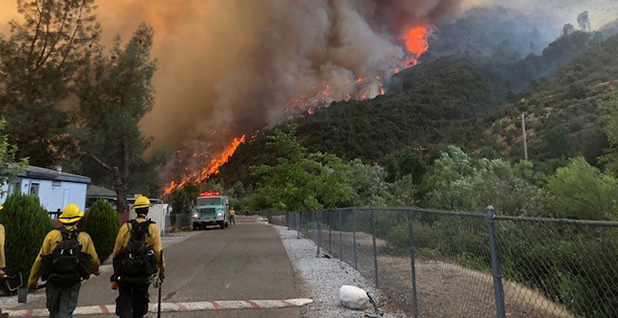 Wildfires like the Carr Fire in California are notoriously difficult for researchers to study and predict. Brenna Jones/Forest Service

As California continues to burn under some of its largest infernos ever recorded, scientists largely agree that the fingerprint of climate change can be found in the ashes. Hotter, drier conditions are priming the western United States for longer fire seasons and bigger, hotter blazes.

It’s not just California. Scientists warn that climbing temperatures will likely lead to more frequent or more severe wildfires in other parts of the world, as well. A spree of record-breaking heat waves across Europe this summer, accompanied by a spate of wildfires, could be a grim glimpse of how the planet is changing.

Although experts are confident climate change is a major influence, they also point out that wildfires are among the most complex natural disasters on the planet. That’s because there are so many factors that affect them, from the type of vegetation on a landscape to the way humans have developed the land.

As a result, making accurate predictions about future fire seasons is a big challenge. And narrowing down the way that fires are influenced by climate change is, too.

The progression of climate change is altering background weather and climate factors that contribute to wildfires in many places. Various studies have pointed to the influence of climate change and of other human-related factors on wildfires — and of their complex interactions with one another.

A 2016 paper in PLOS ONE found that models of fire activity in California were more accurate when they accounted not only for climate and vegetation factors, but also for other human variables like nearby housing and population density.

"It was a pretty important study, because we’ve all been worried about climate change and trying to figure out how to do projections," said Max Moritz, a wildfire expert at the University of California, Santa Barbara, and one of the study’s co-authors. "And we finally realized, ‘Wait a second, wow, a huge part of this signal is actually human development.’ And that means to do it right in the future, we’ve got to get human development patterns right in the future, too."

Other research has taken a more global approach, quantifying changes in the total area burned by wildfires around the world, and the factors that played a role. A paper published last year in Science found that burned area globally has actually declined by about a quarter over the past 18 years, despite the influence of climate change. According to the study, most of the fire declines have occurred in regions historically covered by wild grasslands and savannahs — likely because of the expansion of agriculture, which has replaced landscapes that previously might have been likely to burn.

The study suggests that, worldwide, the amount of land being burned by wildfires is affected more strongly by human land practices than by the climate. That doesn’t mean wildfires in individual regions aren’t increasing in response to climate change. It just depends on the region.

A 2016 study in Proceedings of the National Academy of Sciences found that climate change has been worsening wildfires in the western United States for decades by drying out local vegetation. The research suggests that climate change probably accounts for about half of the total increase in fuel dryness scientists have observed since 1979 — and that this influence, alone, has nearly doubled the area burned by wildfires since 1984.

Mike Flannigan, a wildfire expert at the University of Alberta in Canada, found that remote areas of Alaska and Canada — which are largely undisturbed by human activities that might influence the fire season — are also seeing more fire in response to rising temperatures.

The complex interactions among climate change, land development and other influences, like fire management practices, natural weather variabilities and changes in vegetation patterns, make it notoriously complicated to project future fires. But researchers are trying.

"I think that we can and we do make predictions — maybe that’s too strong of a word, but estimates — of future fire activity in the world," Flannigan said. "And each region has its own set of variables that you have to take into account."

Some studies have focused solely on the ways that climate variables could affect future fires. Even this produces complex results. The research finds that the climate effect will vary from one geographical location to the next — significantly worsening the fire seasons in many places, while having smaller effects or even causing fire declines in others.

"It’s definitely going to be a heterogeneous pattern," said Abatzoglou, the University of Idaho fire expert.

A study in the journal Climatic Change suggested that climate change in the south-central U.S. may cause the probability of fires to decline by as much as 50 percent in some regions by the end of the century and increase by as much as 240 percent in others.

It goes to show that climate change won’t affect every region in the same way. While rising temperatures are a given throughout the world, the rate at which the warming occurs, and the way it affects local precipitation pattern, lightning, winds, the length of the seasons and the types of vegetation that populate an area may be different depending on the location. All of these factors may affect the likelihood or severity of fires.

And that’s looking at climate, alone. To make truly accurate forecasts, some scientists say other factors need to be accounted for, as well. Moritz, the UC Santa Barbara fire expert, pointed to his findings in 2016 that land use and human development may affect the probability of wildfires just as much as the climate, at least in California.

"We realized that actually to project fires into the future, we actually have to have future land development scenarios in addition to future climate scenarios," he said.

Predicting how human societies will grow or shift in the future may seem "daunting," Moritz said — but scientists have models for these purposes, just as they’ve developed models to simulate the future climate. In some cases, development and population growth may increase the likelihood of fires if it’s putting people closer to natural areas. In other cases, too much development might actually wipe out burnable landscapes and decrease the region’s fire activity.

Adding to the mix are a number of "wild cards" that are still not fully understood but could play a role, Abatzoglou added. For instance, some experts have suggested that extreme future increases in wildfires could actually burn up so much vegetation that fire activity declines.

In the meantime, experts say that accounting for all of these factors when creating fire management protocols could mitigate the damage caused by wildfires.

In places where fire suppression is believed to be increasing the prevalence of dry fuel, land managers may consider controlled burns, Flannigan said. Prescribed fires can help clean out the build-up of dry vegetation and decrease the likelihood or severity of natural fires down the road.

Closing forests to the public during the warm season may also limit the likelihood that someone will start a fire, he noted. Forest closures are "really effective at stopping wildfires," he said, but they do come at the cost of limiting recreational and industrial activities during certain times of the year.

And Moritz noted that, as climate change continues to alter the background conditions necessary for wildfires, changes in community development plans might be more warranted. Putting people in proximity to fire zones increases the likelihood that fires will start and the amount of damage that can occur.