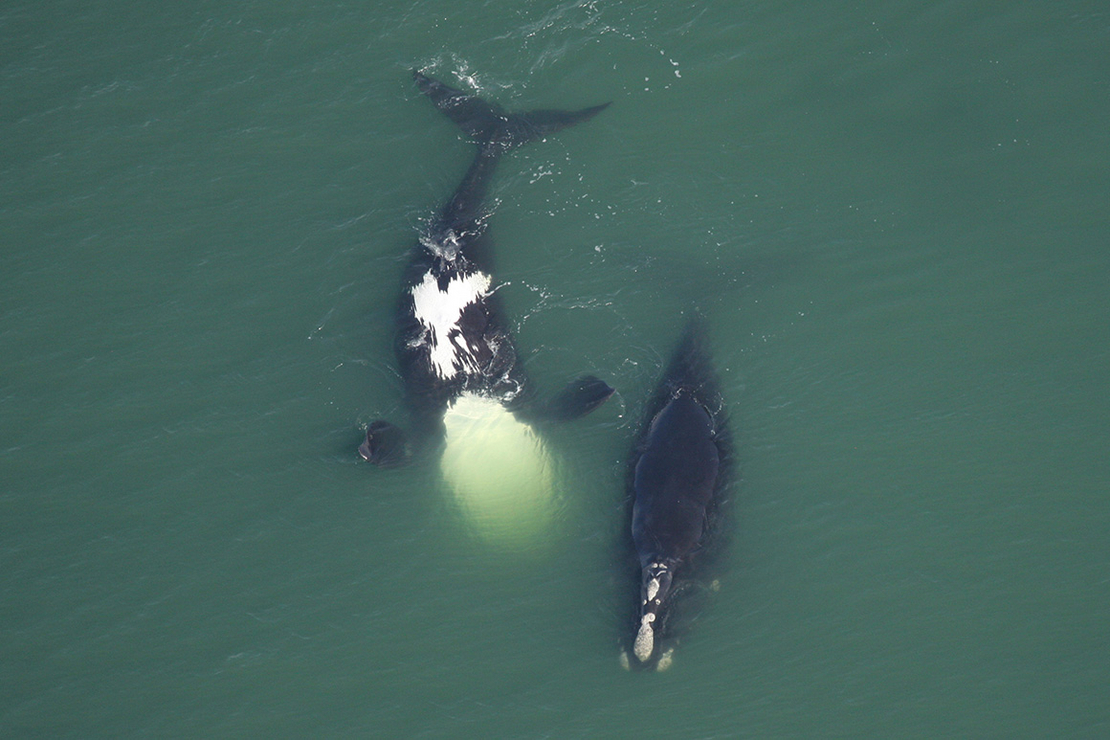 Two northern right whales swim together in 2010. The rare mammals are changing their behavior because of climate change, according to researchers. Florida Fish and Wildlife Conservation Commission, NOAA Permit #594-1759 via AP

North Atlantic right whales are some of the most endangered marine mammals on the planet. Threatened by shipping collisions and tangles with fishing nets, fewer than 400 individuals are thought to exist in the wild today.

Now, scientists are adding climate change to its list of dangers.

Recent studies suggest that warming ocean waters are shifting the tiny crustaceans that right whales like to eat, causing them to multiply at different times of the year and move into new parts of the ocean. As the whales follow their prey, they’re abandoning some of their old feeding grounds, migrating into some new ones and arriving in some places earlier or later than they would usually be expected.

As a result, scientists warn, they’re showing up in spots that don’t necessarily have adequate protections in place for them. That may increase their risk of running into ships or nets.

A new study, out last week in the journal Global Change Biology, is the latest to raise the alarm.

The research finds that right whales are changing the way they move through Cape Cod Bay, one of their preferred spring foraging grounds. They’re using the habitat more heavily than they did in the past and their peak numbers are shifting later in the season.

The shifts appear to be pinned to changes in New England ocean temperatures, the study suggests.

The scientists, led by Daniel Pendleton of the Anderson Cabot Center for Ocean Life at the New England Aquarium, pulled data from aerial surveys conducted by whale researchers over Cape Cod Bay between 1998 and 2018. These surveys documented observations of marine mammals, including various species of whales, moving through the region.

The researchers also collected data sets on ocean temperatures and phytoplankton levels, a way of evaluating changes in the abundance of tiny food sources in the water.

The study investigated not only right whales, but also humpback whales and fin whales, two other species known to feed in Cape Cod Bay during the spring. They found that humpbacks also seem to be shifting the timing of their arrival later in the season — but unlike right whales, they couldn’t detect any association with ocean temperatures.

Right whales, on the other hand, appeared to be changing their feeding behavior in tandem with warming waters. The study doesn’t prove the exact cause that’s driving this shift, but the researchers believe it’s likely a response to changes in the distribution of their food sources.

Right whales tend to spread out and feed throughout the Gulf of Maine in the spring — that’s the body of water stretching up the New England coast from Massachusetts to Nova Scotia. But recent studies suggest the tiny crustaceans they eat are declining in some parts of the gulf.

As a result, the researchers theorize that Cape Cod Bay — a spot that still has adequate food supplies — has turned into a sort of “waiting room” for North Atlantic right whales. It’s a place they can congregate in the spring while they wait for their food sources to build back up in other parts of the ocean.

But these kinds of behavioral shifts can backfire, the researchers warn.

Speed limits for certain kinds of boats in Cape Cod Bay are restricted for part of the spring season, largely to protect right whales and other migratory marine animals. These restrictions were timed to coincide with the time of year when right whales are most abundant.

But if the animals start sticking around longer, they could be at an increased risk of boat collisions later in the season when the speed limits — and the dangers — are higher.

It’s important to pay attention to these kinds of climate-related shifts, the study suggests. Protections for marine animals may eventually need to be adjusted to accommodate their changing life cycles.

The new study isn’t the only one to make such a point.

Starting in 2017, the already dwindling North Atlantic right whale population began to show signs of unusually high mortality rates. A paper published last year in the journal Oceanography warned that changes in the whales’ feeding grounds across the Gulf of Maine may be causing the declines.

That’s likely in large part because the food-stressed whales aren’t producing as many babies in recent years, the study notes. But it may also be because they’re starting to forage more often in waters without adequate protections for marine mammals — increasing their odds of being struck by ships or trapped in nets.

Still, the researchers pointed out, it’s an example of protections that were enacted “only when a crisis arose, after many whales were killed during the summer of 2017.”

The event highlights the need for policymakers to keep a closer eye on the way marine animals are responding to changes in their environments, the study suggested. That means anticipating the places right whales are likely to congregate in the future and making sure they’ll be protected while they’re there.

“Failure to adopt such measures and significantly reduce anthropogenic mortality sources could commit the right whale population to extinction before the end of the century,” the study warned.