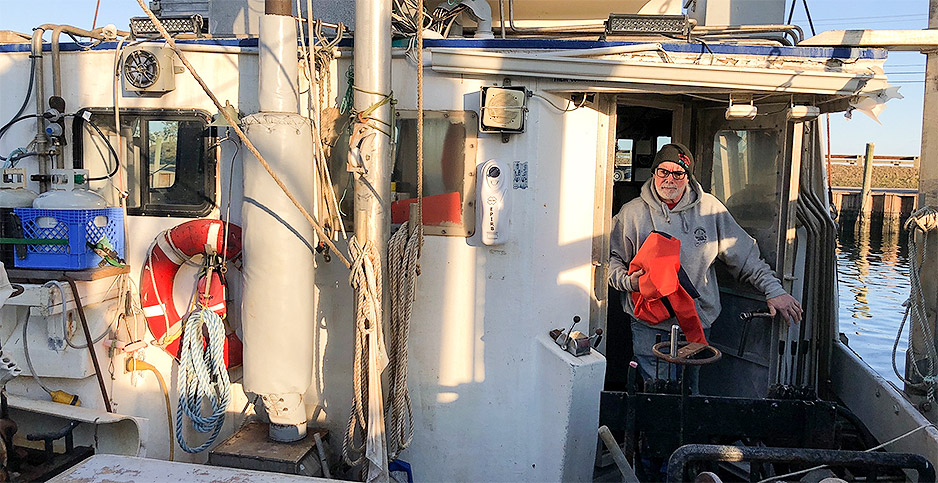 Joel Hovanesian checks out his fishing boat, which he named "The Defiant." He docked the trawler in Narragansett, R.I., after ending his fishing career, partly because of his frustrations with government rules. Rob Hotakainen/E&E News

NARRAGANSETT, R.I. — The warming waters associated with climate change are creating big ripple effects across fishing communities, including in this picturesque seaside town with a long fishing history.

Take Joel Hovanesian, who last fall docked his 40-foot trawler at the Port of Galilee, calling it quits after a 42-year career of chasing fish.

Up and down the Atlantic coast, commercial fishermen are heading for the exits these days, irked by government rules and regulations that they say haven’t kept pace with the changes.

Fishermen have long battled over fish allocations, but the fights have become more intense and complicated due to climate change. As more fish head north in search of cooler waters, fishermen complain that quotas have not kept pace with shifting stocks, making it harder for them to make a living and bring fish to market.

"The fish are moving, and the regulations have got to move with the fish," said Bobby Guzzo, 62, a lifelong fisherman from nearby Stonington, Conn.

While the resulting fish wars pit fishermen from different regions against each other, the migrating fish are also causing plenty of confusion for fishermen and regulators alike.

Many worry about the broader effects on the economy and the overall food supply, especially as oceans provide a growing share of the food. And with water temperatures projected to continue to rise, the troubles are only expected to become more acute.

"We haven’t really considered fish to be a critical food source," said Chris Brown, a Rhode Island commercial fisherman of 40 years. "We had better start thinking about that and thinking about the ocean as our pantry, as just opposed to a playpen."

Consider what’s happening with the black sea bass, which some say has become the poster fish for shifting stocks.

"We’ve already seen them shift north dramatically," said Malin Pinsky, assistant professor of ecology at Rutgers University’s School of Environmental and Biological Sciences. "They used to be centered off Virginia; now they’re centered off New Jersey. That means they’re showing up off the coast in fishing ports where they haven’t been before."

The center of the black sea bass population has moved 200 miles and is projected to shift north by another 150 miles by 2100, Pinsky said.

At the same time, he said, water temperature has increased by 3.5 degrees Fahrenheit from 1970 to 2016. It’s expected to keep going higher, with a 2017 study of global warming predicting the Northeast region of the United States would warm faster than other regions of the world.

But while the black sea bass, a popular dining choice known to be an excellent option for the grill, has shifted north, commercial allocations for the species have not changed in two decades.

As a result, North Carolina gets 11% of the fish, while Connecticut gets only 1%, according to the Atlantic States Marine Fisheries Commission, which works with NOAA to manage the species.

It’s a source of frustration for many Connecticut fishermen, who can only watch as fishermen from North Carolina invade their waters to catch their quotas of black sea bass.

"Why aren’t we all equal up and down the coast so we can land in whatever state you want?" Guzzo said.

Climate change: ‘I see it on the water’

Black sea bass are not the only example of fish migrating to more suitable water temperatures.

In a study of 686 marine species, Pinsky and other researchers last year predicted that nearly two-thirds of the species would shift location over the next 80 years, with some moving just a few miles, while others would likely travel a thousand miles or more.

In some cases, fish normally found in tropical and subtropical regions are heading north, too.

"I certainly believe that climate change is very real, and I see it on the water," said Dave Monti, a charter boat captain and fishing guide who operates in Wickford Harbor in North Kingstown, R.I. "The fish that we catch today are different than the fish we caught 10 years ago. People are actually going wahoo fishing off of Rhode Island, which is insane."

On the West Coast, scientists at the University of California, Davis, reported in March that warm-water species normally seen in places like Baja California, Mexico, had shown up outside the UC Davis Bodega Marine Laboratory during a marine heat wave from 2014 to 2016. These included warm-water species of jellyfish, crabs, nudibranchs, fish, and even dolphins and sea turtles. The study, published in the journal Scientific Reports, found that of the 67 rare warm-water species sighted, 37 had never been documented to have traveled so far north before.

On the East Coast, researchers predict that Atlantic cod will lose 90% of their habitat and move to cooler waters in Canada by 2100.

Summer fluke are on the move, too: In New York, Democratic Gov. Andrew Cuomo sued the federal government, arguing that his state is getting hurt by a low quota for summer fluke. The governor contends that NOAA is using outdated and inaccurate data to make allocations.

In both New York and southern New England, the lobster industry has all but collapsed. Lobstermen complain that they find their traps empty or filled with black sea bass, which prey on lobsters.

"The quotas for black sea bass should be doubled, if not tripled — there’s so many of them," said Marc Hoffman, a Long Island, N.Y., fisherman and a member of the Atlantic States Marine Fisheries Commission’s advisory panel for sea bass. "What do sea bass eat? They eat lobster, and the inshore lobsterman is out of business."

A ‘double whammy’ for fish

Critics say adjusting the quotas in such a manner would make no sense and could lead to overfishing.

"We can’t just raise the quota without some sort of scientific backing," said Chris Batsavage, who represents North Carolina on the Atlantic States Marine Fisheries Commission and the Mid-Atlantic Fishery Management Council, the two agencies that co-manage black sea bass both in federal and state waters.

Batsavage also defended North Carolina fishermen who travel north to fill their quotas: "They know where the fish are, and they know they have to do what they have to do."

Pinsky said fish on the move now face a "double whammy," hit both by warmer temperatures and the potential of overfishing.

"When a fish colonizes a new region, those populations are especially vulnerable to overfishing," he said. "That really has serious consequences for the food we can get out of the ocean, the nutrition and the jobs that are supplied."

Gary Shepherd, a black sea bass expert with NOAA who has specialized in the species since the 1980s, said most fishermen always want to catch more fish, regardless of how many there are.

Pinsky said the current system also forces fishermen to use more fuel to go farther to fill their quotas.

"It’s benefited fishers who have big boats and are willing to burn the fuel to transport them far from the fishing ground to the port where they’ve got a permit to land them," he said. "In the long run, it’s only going to push these fish even farther north."

Hovanesian, who now works as a dock manager, said local businesses are getting hit, too.

"We’ve got boats that should be unloading here, but they have to take their fish out to Virginia and North Carolina," he said. "The environmentalists talk about carbon footprint and this and that. But the boat’s 80 miles from my dock, and that boat is going to steam three days to get to where he’s going. How’s that for a carbon footprint?"

‘You never please everybody’

Shepherd said the black sea bass population in the Gulf of Maine rose during a particularly warm winter in 2011-12, and that a key question is whether those numbers will be sustained or are a short-term phenomenon.

"I think we are keeping pace with things," he said. "But there’s so many steps by law that have to be taken to develop management quotas, there’s always a lag. People want to have the answer now so they can go out and catch them, but you can’t do it that way — which is probably good or bad, depending on your perspective. You never please everybody."

While many fishermen are frustrated, there are some who are of different minds on the subject.

Brown said the debate over black sea bass highlights the inflexibility of the nation’s fisheries management system, but added that fishermen will have to "refocus our personal agendas a little bit."

"You have to break away from your cubicle — simply asking someone to give you more fish is not really a solution," Brown said. "Everything I have has come from the ocean. … I don’t feel as if I am entitled to anything."

As fishermen struggle to survive, the fight has big economic implications, as well. Local fishermen say black sea bass can go for anywhere from $3 to $8 a pound, and fishing has long been big business here. Overall, commercial fishing in 2016 yielded 9.6 billion pounds of wild seafood, valued at more than $5.3 billion.

For many fishermen, the anger is aimed squarely at NOAA and other regulatory bodies.

Hovanesian said commercial fishermen deserve a greater share of the profits. While regulations are necessary, he said, NOAA must change its quotas in a way that helps both the fish and the fishermen survive.

"The answer is to start listening to what fishermen have to say," he said. "We know what’s going on in the water. … These regulations aren’t designed so that we can survive — they don’t allow us to harvest enough fish."