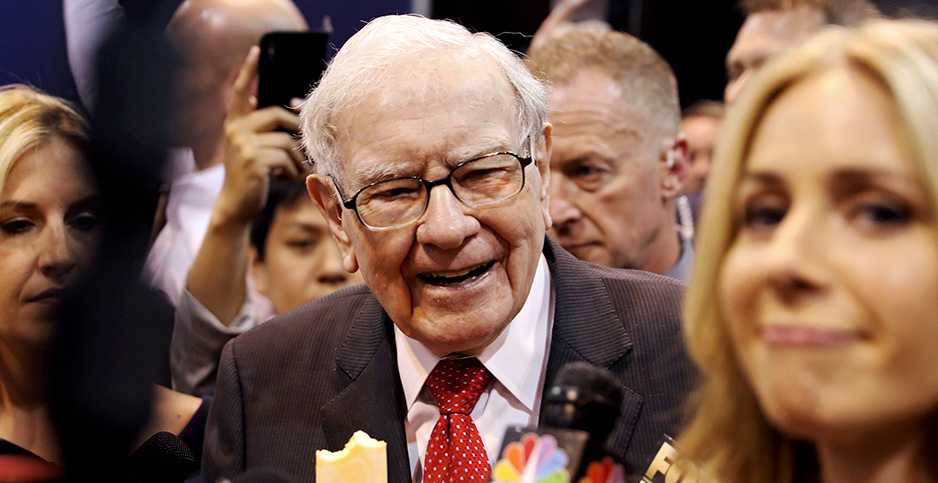 Climate change, and growing shareholder concern about the problem, is posing a major challenge to Berkshire Hathaway CEO Warren Buffett and the old school-style investing he’s famous for.

Berkshire shareholders tomorrow will vote on a resolution that calls on the company to report on how it "manages physical and transitional climate-related risks and opportunities" across its sprawling portfolio. The conglomerate owns coal-reliant businesses like BNSF Railway, PacifiCorp and MidAmerican Energy Co., and several climate-exposed insurance companies.

At its core, experts say, the resolution is asking the 90-year-old "Oracle from Omaha" to rethink the way he does business — to elevate broader societal concerns alongside the interests of the shareholders he’s traditionally focused on.

Implicit in the climate risk resolution, and another focused on Berkshire’s diversity policies, which also has the support of proxy advisers Institutional Shareholder Services and Glass Lewis, is a question: "Is stakeholder capitalism a mandate for every business, or is it a choice?" said Jill Fisch, a business professor at the University of Pennsylvania Carey Law School.

Berkshire opposes the climate risk resolution because the company "manages its operating businesses on an unusually decentralized basis," the board said. "We want our managers to do the right things and we give them enormous latitude to do that; consistent with our business model, each subsidiary is independently responsible for identifying and managing the risks and opportunities associated with their business, including those related to climate change."

Buffett, as Berkshire’s largest shareholder and one of the world’s richest people, has beat back climate-related resolutions in the past. The company’s shareholders have considered nine proposals regarding its climate policies since 2009, according to data compiled by the conservative think tank Manhattan Institute. None of them attracted more than 12% of shareholders’ votes.

Whether Buffett, who controls roughly a third of Berkshire’s voting shares, can do so again at this year’s annual meeting could depend on whether retail investors, institutional money managers like BlackRock Inc. and his friend and fellow billionaire Bill Gates continue to support Berkshire’s hands-off approach to climate change.

Continuing to trust its board and subsidiary leaders to manage climate risks would be a mistake, according to Robert Eccles, a visiting professor at Oxford University’s Said Business School. In a series of Forbes blog posts, the sustainable investing guru urged Buffet and Gates — a strong proponent of climate action whose foundation is a major Berkshire shareholder — to vote in favor of the climate risk disclosure proposal.

"It is very hard to square your position on climate change with Mr. Buffett’s argument regarding the shareholder proposal given the close personal, organizational, and economic relationships between you, Mrs. Gates, and Mr. Buffett," Eccles wrote in an open letter to the Microsoft founder. "This dichotomy isn’t going away, it is going to become more glaring over time, and, in my opinion, you need to address it head on."

The Bill & Melinda Gates Foundation didn’t respond to a request for comment.

Institutional Shareholder Services noted that Berkshire has 63 subsidiaries but only two have publicly disclosed "a climate change strategy and are in the process of setting a science-based target" for reducing their emissions of greenhouse gases.

"Overall, Berkshire does not seem to have a comprehensive plan for managing its GHG emissions, nor a climate change strategy or any related board- or management-level oversight," ISS wrote in a report for investors. "As a result, shareholder support for this resolution is warranted."

Glass Lewis, meanwhile, supports the proposal due to "the Company’s lack of any kind of meaningful disclosure and a notable absence of board oversight of climate-related issues," the proxy advisory firm said in a Controversy Alert. "We believe shareholders would benefit from increased resources being diverted to fill these information gaps, especially considering the Company’s operation of several emissions-intensive businesses."

Glass Lewis also called for shareholders to dump board member Thomas Murphy, who for more than a dozen years served as chair of the audit committee responsible for overseeing risks like climate change.

Whether those recommendations make a difference remains to be seen.

"ISS and Glass Lewis are much less influential than they used to be in part because the big institutional investors — the ones who command most of the votes — have developed fairly sophisticated analyses, have in-house governance teams, and do this analysis themselves," said Fisch of Penn Law. "They take the information that ISS and Glass Lewis collect and use that as part of their input, but they don’t blindly follow the proxy advisors."

Investment firms Fidelity Management & Research Co., First Manhattan Co., the Vanguard Group and BlackRock are the only Berkshire shareholders that control more than 1% of the vote, aside from Buffett and David Gottesman, another board member. The firms don’t disclose their votes until after shareholder meetings, if at all.

But institutional investors — Blackrock, in particular — have become increasingly vocal about their concerns surrounding climate change and other environmental and social issues. That has garnered praise from some activists and skepticism from other business experts.

"They’re actually not the people with skin in the game, which when you move away from economic issues to things like diversity and climate change is perhaps a little bit worrying," said Fisch.

"If you’re a retail shareholder in Berkshire Hathaway, I suspect you support Warren Buffett and you’re going to vote however he says you should vote because he’s Warren Buffet," she said. "But the big institutional investors are flexing their muscles on a range of social and political issues, and that’s not traditionally the way big businesses have run. Whether it’s going to be better or worse in the long run, I’m not really sure."