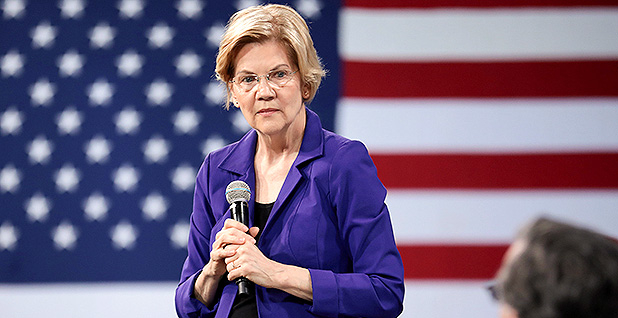 Democratic presidential hopeful Elizabeth Warren wants to significantly boost the role of environmental justice in the federal government and in decisionmaking.

Her environmental justice platform released today incorporates concepts previously endorsed by other presidential candidates. They include refocusing the White House Council on Environmental Quality to protect against disparate environmental impacts on minorities and implementing an "equity screen" on federally approved projects to check for such impacts.

"Our crisis of environmental injustice is the result of decades of discrimination and environmental racism compounding in communities that have been overlooked for too long," Warren, the senior senator from Massachusetts, wrote in her platform.

"It is the result of multiple choices that put corporate profits before people, while our government looked the other way. It is unacceptable, and it must change."

The plan openly borrows from former presidential candidate Washington Gov. Jay Inslee, who dropped out of the race in August after running a climate change-focused bid. Warren credits Inslee for concepts such as focusing one-third of climate change investments on minority communities that see large environmental impacts, and a goal of retrofitting 4% of the nation’s buildings annually for energy efficiency.

It also incorporates many pieces of other plans previously released by Warren, who has earned a reputation among the 2020 Democratic field for publishing numerous policy plans. Her environmental plan also has a target date of 2035 to power the United States on 100% renewable electricity, as well as a housing plan meant to help minorities buy homes.

"Justice cannot be a secondary concern — it must be at the center of our response to climate change," she said.