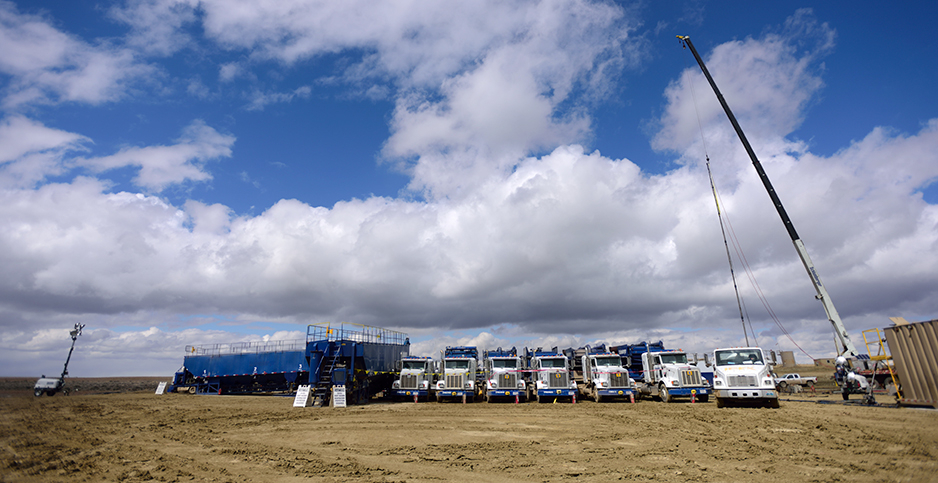 Oil and gas companies are racing to secure permits for drilling on federal land, analysts say, amid concerns a future administration under Joe Biden could clamp down on the industry. Hydraulic fracturing operations are pictured at an oil and gas well completion site on the Jonah Field in Sublette County, Wyo. in 2015. Alex Milan Tracy/Sipa USA/Newscom

Drillers in the largest onshore U.S. oil and gas field are rushing to secure permits ahead of a potential Joe Biden presidency, analysts say, reflecting industry uncertainty about the November election.

The Democratic presidential nominee and former vice president has proposed to effectively retire oil and gas development on federally managed lands over time, appealing to a climate-conscious left flank calling for an end to fossil fuel use.

On the western edge of the Permian Basin, hedging against the possibility of this sea change is in full swing, according to data compiled by the energy consultancy Enverus and first reported by Reuters.

Overall permitting activity spiked by roughly 80% over the last three months on the federal land in Texas and New Mexico, Enverus reported. Analysts believe that the upswing — in defiance of pandemic-driven low oil prices — is a race to secure drilling rights before a potential Biden administration seeks to reverse the "energy dominance" policies championed by President Trump.

"I wouldn’t go so far as to say operators are expecting a Biden win," said Bernadette Johnson, vice president of strategic analytics at Enverus. "But I believe instead some are hedging based on several known and anticipated risks just in case."

Biden has proposed ending new oil and gas leasing on public lands, ceasing to issue new drilling permits and outlawing hydraulic fracturing for federal wells. The legality and political feasibility of these policies are up for debate, experts note, and some details of Biden’s position on fracking are still murky.

The oil and gas sector is no stranger to hedging its bets: Drillers routinely strike deals to lock in future crude sales at a specific price to reduce exposure to swings in the market. This type of hedging is germane to a sector prone to ups and downs.

The permitting rush playing out in the Permian amounts to a political sort of hedging, analysts say, as drillers steel themselves for a possible Biden administration that’s less friendly to their interests.

At the Barclays CEO Energy-Power Conference earlier this month, EOG Resources Inc. CEO Bill Thomas said the oil and gas company — which operates in states like Wyoming, Texas and New Mexico — was increasing its drilling on federal land this year.

"I’m very confident, even in the most draconian scenario that you can possibly print, that EOG is going to be fine," he said.

Last week, a report commissioned by the American Petroleum Institute said a leasing moratorium on federal land and waters would slam states like New Mexico, Louisiana and Wyoming, eliminating hundreds of thousands of jobs and driving up industry imports of crude oil (Energywire, Sept. 10).

The analysis prompted the Albuquerque Journal editorial board to call on New Mexico Gov. Michelle Lujan Grisham (D) to respond.

The governor has said previously that she would seek a state exemption from any fracking ban. Whether such an exemption would be possible under a Biden administration isn’t clear.

Fracking is a ubiquitous practice at oil wells on Western lands managed by the federal government.

Michael Pearlman, a spokesman for Wyoming Gov. Mark Gordon (R), said a fracking ban would be "disastrous" if enacted, "for the state of Wyoming and our economy, including our ability to educate our kids."

Questions remain about how Biden’s oil and gas policies — many of which are listed on his campaign website — would play out on the ground in places like New Mexico and Wyoming.

The Biden campaign did not provide comment in time for publication.

Johnson of Enverus said oil and gas firms are trying to account for those unknowns.

"It’s much more difficult to run a business, deploy capital and plan for the future if you don’t know what the rules or restrictions will be," she said.

The former vice president’s approach has widespread support among environmental advocates critical of the Trump administration’s embrace of fossil fuels.

Earlier this month, more than 100 progressive groups — including Justice Democrats, Data for Progress and the Sunrise Movement — urged Biden to shut out anyone affiliated with the fossil fuel industry from his future administration (Greenwire, Sept. 1).

"There is no doubt that the Biden campaign would try to accelerate the transition to clean energy sources on public land," he said, but oil and gas activity would continue in the meantime.

Drillers have been given a "sweetheart deal" for decades, Lee-Ashley said, pointing to $2-per-acre minimum bids for 10-year lease rights and baseline royalty rates that date back decades.

Trump has seized on some of Biden’s comments on energy, accusing the former vice president of seeking to ban all fracking, not just new activity on federal land — a stance that could pose political pitfalls in states rich in oil and gas like Pennsylvania.

Biden sought to correct the record at a campaign event in the state late last month.

Peter Wold, who runs a Wyoming-based exploration and production company, said Biden has been trying to represent two opposing views at once, appealing to both voters who want an end to fracking and those who are more sympathetic to the oil and gas industry.

Wold’s company, Wold Oil Properties LLC, has its operations concentrated in the Powder River Basin of Wyoming. There, the mix of federal, state and private land makes it difficult to drill anywhere without tapping federal minerals, exposing the development to federal rules and regulations. All the recent wells Wold has drilled in the Powder River Basin in recent years were fracked.

Wold said he doubts many of Biden’s energy policies will make it past the campaign, even if the former vice president is elected. It’s too legally tricky to bar drilling on already-purchased leases or revoke existing permits, he said.

"I think [Biden] would like to figure out how he could minimize our consumption of oil and gas, and I think he is sincere in that regard," Wold said.

But when it comes to moving rapidly away from fossil fuel dependency culturally and economically, "he is going to have to wake up and face reality on that one if he is elected."

Wold’s company has been one of the smaller but more aggressive operators in eastern Wyoming as the Trump administration has sought to revitalize federal oil and gas production in the region.

In 2019, Wold Oil Properties filed more than a thousand permits to drill, and nearly 2,000 the prior year. It wasn’t alone: The much larger, publicly traded EOG filed nearly 4,000 permits in 2018, and as many again last year, according to the Wyoming Oil and Gas Conservation Commission. Not all of those permits will result in wells being drilled.

The permitting rush in Wyoming has slowed down this year with depressed prices.

Whatever happens in November, actual oil and gas production on federal land is coming down from a multiyear boom due to a slump in crude prices amid the coronavirus pandemic.

Kathleen Sgamma, president of the Western Energy Alliance, has been a steady advocate for Trump’s energy dominance agenda. The oil and gas sector is way ahead thanks to Trump, she said.

Lee-Ashley, the former Interior adviser, said reorienting federal energy development in response to climate change will be one of the biggest challenges facing the agency if Biden wins.

"It won’t happen overnight," he said. "You can’t just turn the spigot off."