Was the climate rule really bad for the economy? 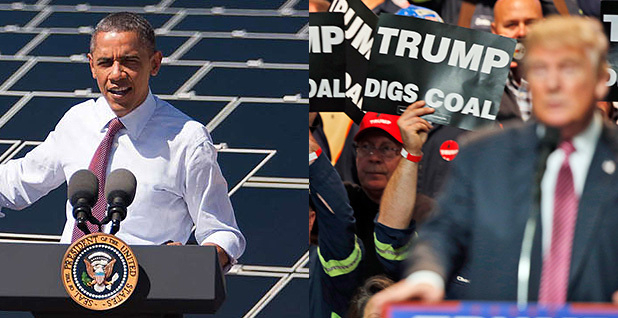 Whose energy policies are better? Some say that's a question of fuzzy math. Photos courtesy of the White House (Obama) and Steve Helber/AP Images (Trump).

In truth, that’s hard to show.

Experts say it’s difficult to get more than a rough estimate of how the Clean Power Plan would influence power costs, since natural gas and renewable energy prices play a role, as do state choices about trading systems.

Canceling the first-ever standards to reduce emissions from power plants is also unlikely to revive the dying coal industry, although it may keep some jobs in western U.S. mines from disappearing, according to the U.S. Energy Information Administration.

While economic studies on the rule have varied wildly, the Trump administration is relying on one paid for by the coal lobby and conducted by NERA Economic Consulting. NERA found that the Clean Power Plan could cause double-digit electricity price increases in many states. In a briefing yesterday, the White House cited that finding and argued that it couldn’t pursue any policy that "puts the economy at risk."

Supporters of the Clean Power Plan, however, point to studies that show people would save money on electricity under the rule. They believe the Clean Power Plan would spur energy savings and result in lower bills. U.S. EPA and EIA came in somewhere in between, estimating that electricity prices would rise slightly at first but fall later. EPA thought they would be lower than without the rule by 2030.

The huge number of unknowns makes it "very easy for folks to cherry-pick desired results," said Noah Kaufman, a climate economist with the World Resources Institute who worked for the Obama administration. NERA assumed much higher costs for wind and solar power than did groups like MJ Bradley & Associates and Synapse Energy Economics, Kaufman noted in a recent analysis.

Despite the wide range of estimates, Kaufman said he hasn’t seen any study that "makes a compelling and independent case to show that the economic effects are anything other than just noise in comparison to the economy as a whole."

Industry groups disagree, and they believe the costs of the rule would be higher than any possible benefits.

A recent study by NERA for the U.S. Chamber of Commerce and the American Council for Capital Formation found that meeting the Paris climate pledge would cost the average American household up to $160 a year and eliminate up to 440,000 jobs by 2025 (Greenwire, March 16). Environmental groups attacked those numbers as unreasonable, saying the researchers intentionally picked the most expensive ways to comply. The chamber says it was being realistic about how the United States might regulate different sectors based on legal confines.

As those types of debate rage on, Trump today will claim a victory for cash-strapped Americans and fossil fuel workers. But the actual economic impact of his actions will be hard to decipher.

When ideology mixes with economics

Observers might assume that the true cost of climate action would fall in the middle of the range of estimates. Researchers warn against that.

"Across all the years I’ve looked at it, it’s not necessarily in the middle," said Tom Wilson, a senior program manager at the Electric Power Research Institute who has been studying climate policy analyses since the 1980s and has witnessed the unexpected natural gas boom and rapid declines in renewable power costs.

"The sort of key thing is that all types of strange things can happen," he said.

Wilson in his presentations explains how analysts in the 1980s estimated the level of global carbon emissions for 2000 and nailed it. They got all the inputs wrong, believing before the Chernobyl meltdown that nuclear power would expand quickly and thinking that Africa would use more power than China. But somehow all the figures balanced out.

There is similar uncertainty in the power sector now. Cheap natural gas has pushed coal and zero-carbon nuclear power offline. It’s unclear whether people will really want to buy electric vehicles even when they cost the same as traditional ones. They might not like the way the cars accelerate or could cling to range anxiety, Wilson explained.

Environmental advocates will also note that many studies don’t consider the economic benefits of reducing carbon emissions and spurring other countries to do so, as well. They say policymakers should consider lowered public health costs, avoided infrastructure expenses and savings from curbing the intensity of extreme weather events.

While the exact costs of the Clean Power Plan are hard to pin down, soldiers on both sides of the political debate insist they know how the rule would play out. That’s an age-old strategy.

When the House passed cap-and-trade legislation in 2009, and the Senate was considering it, some models showed that the legislation would have been economically manageable, recalled Greg Dotson, who worked for former Rep. Henry Waxman (D-Calif.), a co-author of the bill. Dotson cited one government study that found the cap-and-trade plan would have slowed the growth of the gross domestic product, but only by a few months and not for decades.

Dotson said critics misused some modeling to make their arguments that the measure would be bad for the economy. He said models also almost never adequately assessed the cost of failing to address climate change and exaggerated the importance of small effects projected to occur years in the future. For example, during the debate in 2009, opponents posted stickers on gas pumps warning of immediate price spikes that weren’t projected to occur until 2030.

"When you start thinking about it in those terms, models show that it’s possible to craft climate change policies in which the costs are small but the benefits are huge," he said.

At the time, it was mainly pundits and those in conservative circles citing industry studies against cap and trade. Now, the president is using such assessments to back up his executive actions.

Dotson said that could be helpful, in giving people a chance to do some fact-checking.

"The problem with whisper campaigns that take place by industry outside of Washington, D.C., is sometimes they’re quite hard to rebut," Dotson said. "When something comes from the president’s mouth or Administrator Pruitt’s mouth … it gives experts something to really focus on."

Public Citizen yesterday was already taking aim at Pruitt’s comments on ABC News on Sunday that climate policies cause electricity rates to increase.

‘Coal still has a role to play’

Part of why Clean Power Plan assessments are so hard is because EPA would have given states wide latitude in how to meet their goals, including by using carbon trading.

Before the courts stalled the rule, most states were considering carbon trading, which would have lowered costs, according to various studies by regional grid organizations.

To be sure, costs of the rule would vary around the country, likely hitting coal-heavy states that have been slower to transition away from fossil fuels the hardest.

Market realities are hitting states in the West particularly hard as they try to navigate coal plant closures as companies no longer find the fossil fuel cost-competitive.

Scott Segal, an industry lawyer at Bracewell LLP, said that while it’s "always difficult for the government to establish a program that can expand or save any specific industry," the government can "remove obstacles."

He argued that while natural gas is cheap and renewable power is growing cheaper, "coal still has a role to play."

No power company in the country is looking to invest in a new coal plant. But Segal said that "market demands and unforeseen circumstances could spell a resurgence for coal," if the government gets the regulatory approach right.