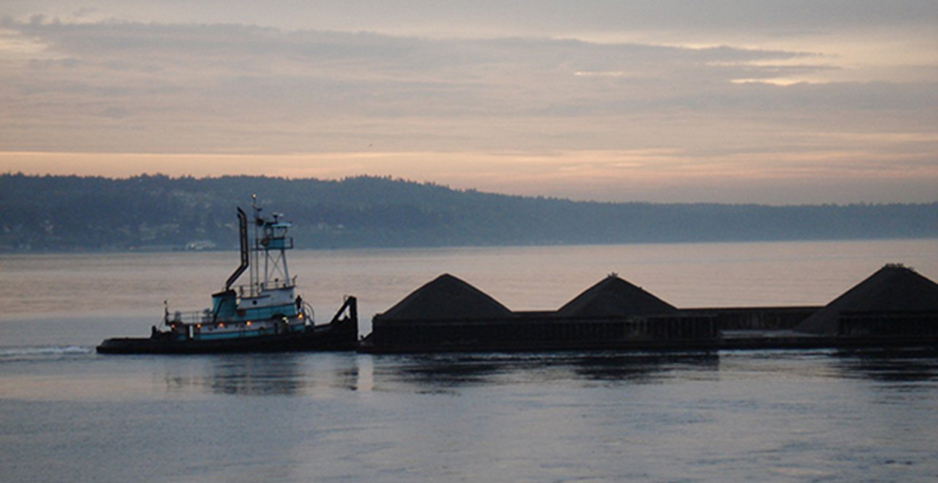 A coal barge is seen in Washington state, where a carbon fee will be decided on by voters this fall. Albert/Flickr

Carbon pricing will be on the ballot in Washington state in November, and the money is pouring in from big-name environmental groups backing the initiative and oil companies hoping to kill it.

The ballot measure, Initiative 1631, would impose a $15 fee on each metric ton of carbon dioxide beginning in 2020 and increase $2 annually until the state reaches its emissions goals.

Supporters, including a wide range of environmental and labor organizations, view it as potentially historic and a much better option than the revenue-neutral carbon pricing ballot measure that failed in Washington in 2016.

But they find themselves up against an old foe. Two opposition campaign groups are funded almost entirely by the oil and gas industry, according to state disclosure forms.

A campaign called "No on 1631" is sponsored by the Western States Petroleum Association, and it has already raised almost $9 million in cash contributions. That includes a $3 million contribution from BP PLC last week and a $3.5 million donation from Phillips 66 Co. earlier in the month.

Dana Bieber, a spokeswoman for the No on 1631 campaign, said she expects farmers, labor unions and small-business groups to join the opposition in the coming months.

Meanwhile, Clean Air Clean Energy Washington, which is funding the yes campaign, has raised about $3.8 million altogether, including cash and in-kind contributions, according to disclosure forms. Its top donor is the Nature Conservancy, with big chunks of cash coming from individuals and other big-name environmental groups, such as the Sierra Club and Washington Conservation Voters.

"We do expect that we’ll be outspent by the oil industry pretty significantly," said Nick Abraham, a spokesman for Yes on 1631.

That, they say, should allow this year’s proposal to fare better than the carbon tax ballot initiative that was roundly rejected in 2016 or the carbon fees proposed by Gov. Jay Inslee (D). Those failed to gain traction in the state Legislature.

Many progressive groups opted not to support the 2016 measure, in part because it would have cut taxes rather than making direct investments in lower-income communities.

The plan would implement a carbon fee, which would be legally different from a carbon tax. Instead of flowing toward other tax cuts or existing state government programs, the fee would be invested in things like pollution cleanup and a new clean energy fund to be set up by the state treasury.

Another part of the fee would be directed to "programs, activities, or projects to prepare communities for challenges caused by climate change and to ensure that the impacts of climate change are not disproportionately borne by certain populations."

In other words, the money would go to the people who most stand to benefit from the investment and who suffer most from the effects of climate change, said Aiko Schaefer, director of Front and Centered, a coalition of organizations representing communities of color and low-income residents.

"They’re areas that have the nexus of high levels of pollutions and areas where the economy would benefit from investments," she said. "For us, that was an important aspect of transitioning away from a reliance on fossil fuels. We felt like a revenue-neutral carbon tax would give away that opportunity to invest in solutions."

Oil and gas companies that publicly voice support for carbon pricing say there are practical reasons to oppose the Washington ballot measure.

Most pressing is that some of the state’s largest polluters — namely its massive aerospace industry and the Centralia coal-fired power plant — would be exempt from the fee, putting refiners in the state at a disadvantage.

In a letter to state lawmakers earlier this month, Robert Allendorfer, the manager at BP’s Cherry Point refinery, wrote that the company had attempted to work with the sponsors of 1631 but called the final version "a poorly designed policy." BP supports nearly 10,000 jobs in the state, he said.

"It would exempt six of the ten-largest stationary source emitters in the state, including a coal-fired power plant, an aluminum smelter and a number of pulp and paper plants," Allendorfer wrote. "This would undermine the goal of reducing emissions, while effectively subsidizing certain companies at the expense of others."

In a statement, BP spokesman Jason Ryan reiterated the company’s support for carbon pricing, noting its membership in the Climate Leadership Council, an organization that champions a conservative carbon fee and dividend model.

Bieber, from the no campaign, said opposition to the carbon fee is not a challenge to climate science or the idea that the state needs to reduce its carbon emissions.

"There are a couple things we can all agree upon. Climate change is a serious challenge, and we need to address it," she said. "But 1631 is not a serious solution."

The policy would cover more than 80 percent of state emissions, said Mike Stevens, Washington state director for the Nature Conservancy. As for the exemptions for aerospace and other emissions sources, he said, "it doesn’t make sense to essentially create a set of incentives or requirements that would lead a company to move its operations or its jobs out of Washington and move to another state or another country where their production is actually going to be more carbon-intensive."

The other issue opponents have with the measure, however, is that the goal posts can easily shift, Bieber said.

The carbon fee would stop increasing "when the state’s 2035 greenhouse gas reduction goal is met and the state’s emissions are on a trajectory that indicates that compliance with the state’s 2050 goal is likely," the initiative reads.

It would create a public oversight board to oversee implementation. But the board would have power to amend those goals and allow the carbon fee to continue increasing, despite little guarantee the plan would actually reduce emissions, Bieber said.

"They wrote it so cleverly that even if they don’t reduce carbon emissions, they actually get more money," Bieber said.

Supporters say that’s not a fair criticism. The plan is designed to meet specific emissions goals, and the board would still be accountable to state government, Stevens said.

Abraham, from the yes campaign, said opposition to the carbon fee is based on industry interests — it would hurt oil companies’ profits.

"Look, the oil industry has been telling us that they’re waiting for a plan that they love for three decades," he said, "and they’re never going to get on board with something because they don’t want to find a solution."

Disclosure forms for opponents and supporter groups reveal different campaign strategies as the fight gears up.

Money from the no campaign has flowed mostly from oil and gas companies to consultants, pollsters and strategists, according to disclosure forms.

The campaign in July doled out just under $300,000 to Amplified Strategies Inc., a Seattle-based company, for research and a direct mail campaign.

Moore Information Inc., a company that specializes in opinion research and voter data, has taken in nearly $150,000 overall from the no campaign, as has Winner & Mandabach Campaigns, a California-based consulting group.

Bieber and another spokesman declined to provide much detail about what those companies are being paid to do, but she said the lead-up to November will largely involve education about the initiative, which she said is "misleading" and "complex."

"I don’t want to hand out our playbook, but I can tell you this: We are committed to making sure voters have the facts about the measure," Bieber said.

The Yes on 1631 campaign, meanwhile, has put the bulk of its expenditures toward employee wages and smaller expenses, like postage stamps and printing.

The campaign’s biggest strength is its ability to go door to door and speak one on one with local politicians in places like Centralia, home of the state’s only coal-fired power plant, Abraham said.

Part of the reason the plant is exempt from Initiative 1631 is that it’s set to close in the next decade.

So far, however, supporters have spent about $1.2 million more than the largest opposition group, even if they’ve raised less. The plan is to launch some television ads, Abraham said, and the group has already been running some small-dollar spots on Facebook.

Stevens added that the campaign is continuing its fundraising push to counter messaging by the oil industry on the airwaves.

Inslee has also thrown his voice behind the measure, particularly as wildfire smoke continues to block out the sky in parts of the state.

"Today, this smoke [may] be opaque. But when it comes to children’s health, it has made something very clear, and that is the state of Washington needs to pass this clean air initiative, so these children can breathe clean air," Inslee said last week, according to Seattle’s KING 5 News.