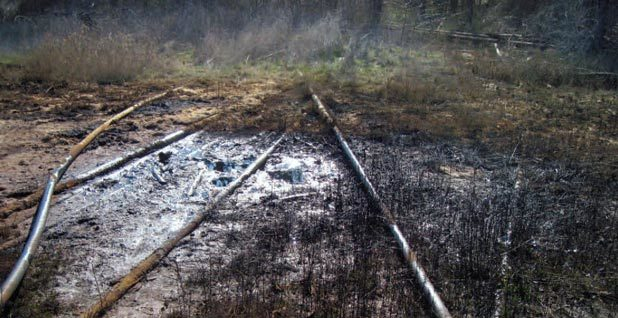 It took decades for the stand of hardwood trees near Lake Texoma to grow tall. It took less than a day for 3,000 gallons of drilling wastewater to destroy them.

The salty fluid spilled from aging oil field pipes in February 2012 in the Hagerman National Wildlife Refuge north of Dallas. The leak killed 84 mature oaks, cottonwoods and hackberry trees, some of them more than 150 years old. U.S. Fish and Wildlife officials estimated the damage at $154,000.

But you won’t find the details of the spill in the records of the Texas Railroad Commission (RRC), the state agency in charge of regulating the state’s oil and gas industry.

The state doesn’t track wastewater spills, and the rules are so vague and unenforceable that insiders say companies don’t even need to notify state officials when they have a spill. Many consider notifying RRC about waste spills to be voluntary, though the agency insists otherwise.

Most other states with oil and gas producers track wastewater spills and require drillers to report them. But while Texas tracks spills of crude oil and condensate, its records leave out spills of the waste fluid often called "salt water," or "produced water."

The omission of such information in Texas, environmentalists say, ignores the danger presented by the toxic, briny fluid.

"Texas is way behind the curve when it comes to paying attention to salt water spills," said Scott Anderson of the Environmental Defense Fund.

Texas officials declined to explain why such spills are omitted from reporting requirements, but they stress companies are supposed to clean them up.

"Produced water spills of any amount must be cleaned up under Statewide Rule 8 but reporting is not required in the agency rules," former Texas Railroad Commission Executive Director John Tintera said in an email to EnergyWire.

But Anderson said a requirement that spills be cleaned up is unenforceable if they don’t get reported.

"The notion that salt water spills can be effectively regulated without even requiring spills to be reported is ludicrous," Anderson said.

Excluding such spills has the effect of masking a large amount of pollution from oil and gas wells. In the states that do track all spills, records show there can be as many wastewater spills as oil spills.

In neighboring New Mexico, 55 percent of spills reported in 2014 were wastewater-only. In Oklahoma, wastewater spills were 36 percent of the total.

Texas’ policy also discounts what experts say can be severe environmental damage. The briny wastewater is many times saltier than seawater and can include heavy metals, petroleum residue and even low-level radioactive material.

Oil spills tend to get more attention. But thick crude oil can be scraped away. Briny wastewater, on the other hand, can penetrate deep into soil, even down to groundwater.

And even if it doesn’t reach groundwater, the salty water can turn productive farmland into concrete-like "hardpan."

"Brine spills are much worse than oil spills, in my opinion," said Pedro Ramirez, an environmental contaminant specialist with the U.S. Fish and Wildlife Service who has studied spills in refuges.

If it isn’t cleaned up, nothing will grow on the land for generations. If a company does try to clean up a spill, it can take years.

"The hydrocarbon [oil] will be a distant memory while you’re still dealing with the salt," said Kerry Sublette, a chemical engineering professor at the University of Tulsa.

Texas has a reputation for not being as aggressive in cleaning up such spills, said Sublette, who does seminars on remediation all over the country. And Ramirez said that without data, it’s more difficult for land managers to get a handle on the scope of the problem.

"If you’re not tracking them, it’s going to be more difficult to manage that situation," Ramirez said.

EDF’s Anderson notes that Texas regulators may also be missing problematic side effects of efforts to conserve groundwater.

Because industry is looking for ways to reuse produced water in frack jobs, a lot more wastewater is being trucked and piped through oil field communities now. That means a lot more chances to spill wastewater.

"It is especially important to track saltwater spills given industry’s increased interest in recycling of produced water," Anderson said.

Texas’ policy on reporting brine spills can be confusing. The RRC has specific requirements for reporting oil and condensate spills of five barrels or more. Companies must fill out a form, called an H-8, when such spills happen.

But there is no specific reporting requirement for reporting brine spills. The H-8 form excludes wastewater spills.

RRC’s "Statewide Rule 20," McElwain said, requires that such releases must be reported to the local RRC office by phone.

But that’s not always the understanding of those outside the agency’s media affairs office. Tintera, the agency’s former director, told EnergyWire reporting is voluntary.

So did Richard Brantley, the associate director of the Midland office of the University of Texas’s University Lands. The UT system includes more than 2 million acres in the resource-rich Permian Basin, most of which are leased for energy development. UT land managers oversee leases with more than 250 companies.

Brantley said that reporting wastewater spills to the Railroad Commission is voluntary.

UT land managers use a spill cleanup guide that incorporates a 2005 RRC draft guide that says "all produced water notifications are voluntary."

McElwain said that document is outdated and unofficial. Brantley said he was unaware of any other guidance from the Railroad Commission.

UT land managers, though, require companies to report any spills of wastewater or anything else, Brantley said. Companies are required to report in writing.

"Don’t just call me and tell me," Brantley said.

Heather Palmer, who advises clients on the environmental issues surrounding oil and gas development for Bracewell & Giuliani, says it’s her understanding that companies must report brine spills by phone and follow up with a letter.

But there is some confusion, she said, because there is no threshold for reporting brine, unlike the five-barrel threshold for oil. So it’s not clear what counts as a spill. That makes for some subjective decisions in the field.

"Does that mean a thimble-full?" she said. "Our clients struggle with this."

RRC reported 25 violations of its notification rules for the fiscal year that ended Sept. 1. They are not broken down by type of spill. RRC records show companies reported 1,256 crude oil and condensate spills.

The company responsible for the spill in the Hagerman refuge agreed to deposit $30,000 in a cleanup fund and developed plans for replacing the pipes that leaked with better pipe farther from sensitive areas.