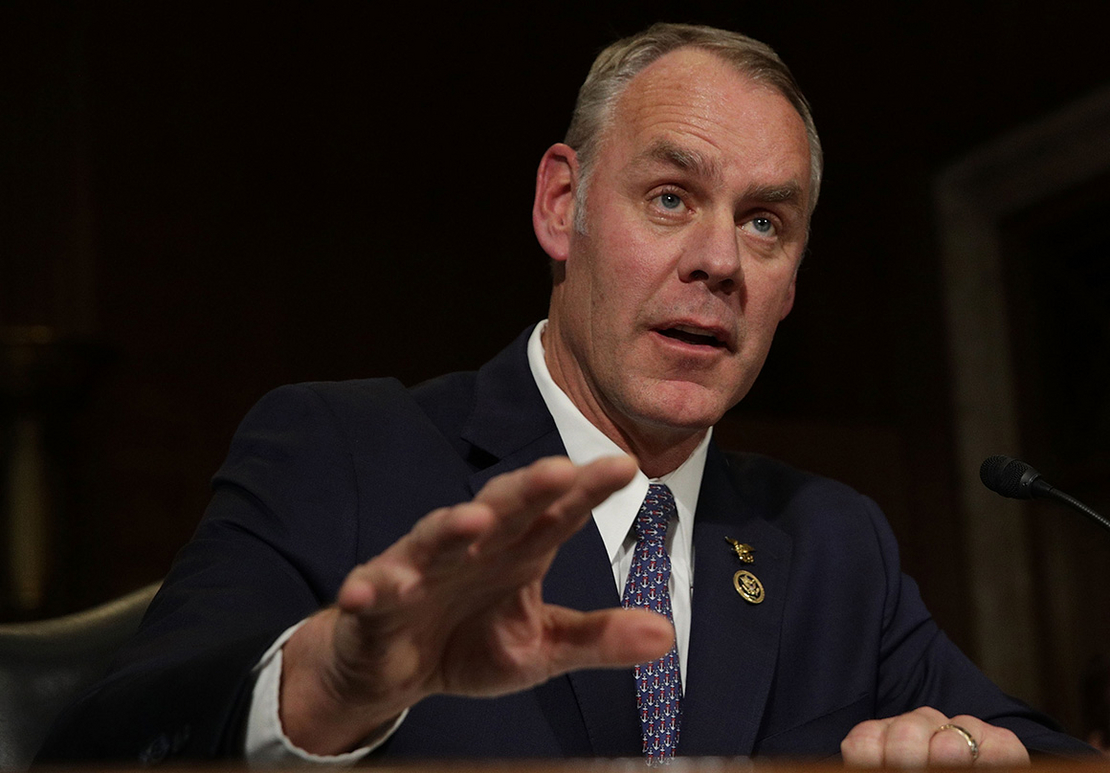 Ryan Zinke is pictured testifying during his confirmation hearing to be Interior secretary before the Senate Energy and Natural Resources Committee on Jan. 17, 2017. Alex Wong/Getty Images

Former Interior Secretary Ryan Zinke misled investigators and “did not comply with [the] duty of candor” when discussing a controversial Connecticut tribal gaming issue, the Interior Department’s watchdog agency says in a highly critical new report made public today.

In a long-awaited report, Interior’s Office of Inspector General declared that Zinke and his then-chief of staff, Scott Hommel, made statements to OIG investigators “with the overall intent to mislead them” and that both men “made statements that presented an inaccurate version of the circumstances” in which the department made key decisions. Hommel was not named in the report, but can be identified by his position and the timing of events.

“As a result, we concluded that Secretary Zinke and the [chief of staff] did not comply with their duty of candor when questioned about their respective involvement in the [department]’s decision,” the report stated.

Zinke, who resigned from the top Interior post effective in January 2019 in the face of multiple ethics complaints, is now running for a U.S. House seat in Montana.

An attorney for Zinke said in a written response that the report’s conclusions were wrong and that the release of the report was ill-timed. The attorney’s name is blacked out in the report, but they used letterhead for the firm Schertler Onorato Mead & Sears, which was not blacked out.

“It is crystal clear that Secretary Zinke acted lawfully and ethically in carrying out his duties,” Zinke’s attorney wrote, adding that “it is well known that former Secretary Zinke is running for a Congressional seat in Montana and the election is set for November of 2022, about three months from now. Given the unnecessary delay in completing the report, we find the timing of the release of this report disturbing and improper.”

“Put simply, Secretary Zinke was completely candid. The content of the IG report and the timing of its release will be seen for what it is by the public,” Onorato said.

Hommel did not immediately respond to a request for comment, and did not provide written comments to the report.

The underlying OIG investigation, spelled out in great detail but with some individual names omitted, dealt with Interior’s decisionmaking on a casino.

The case revolved around an effort by the Mashantucket Pequot and Mohegan tribes to build a casino in East Windsor, Conn. The project required an amendment to a current state and tribal revenue-sharing compact.

MGM Resorts Global Development LLC, a multinational casino operator, opposed the East Windsor proposal because it would compete with MGM’s casino in nearby Springfield, Mass. MGM is a major player in Nevada politics.

The investigators came to no conclusion about Interior’s actions in its initial withholding of an approval the tribes had sought as part of an effort to build the new casino (E&E News PM, Oct. 30, 2018).

But in the course of their review, which included two interviews with Zinke, the investigators said, they found inconsistencies between what Zinke said about his decisionmaking and what was said by Interior attorneys, casino representatives and a U.S. senator.

“We also considered information obtained from our review of emails and text messages exchanged with Secretary Zinke, the COS, and others with an interest in the Tribes’ amendments, including text messages and emails between Casino’s lobbyists and executives that were sent contemporaneously with the events they were describing,” the OIG recounted.

For instance, the investigators concluded that “a fair reading of Secretary Zinke’s statements, taken as a whole, is that Secretary Zinke had based his decision” on the advice of Interior’s attorneys and that “he was not influenced by the considerations or recommendations of third parties.”

“He also repeatedly stated that he had not had conversations with anyone outside the agency — including the U.S. Senator or industry lobbyists — who advised him to take a different course of action,” the OIG reported.”Given the number and extent of communications with these outside personnel, combined with the absence of information that anyone — counsel or otherwise — within the agency advised this course of action, we find that Secretary Zinke’s description of events was not accurate.”