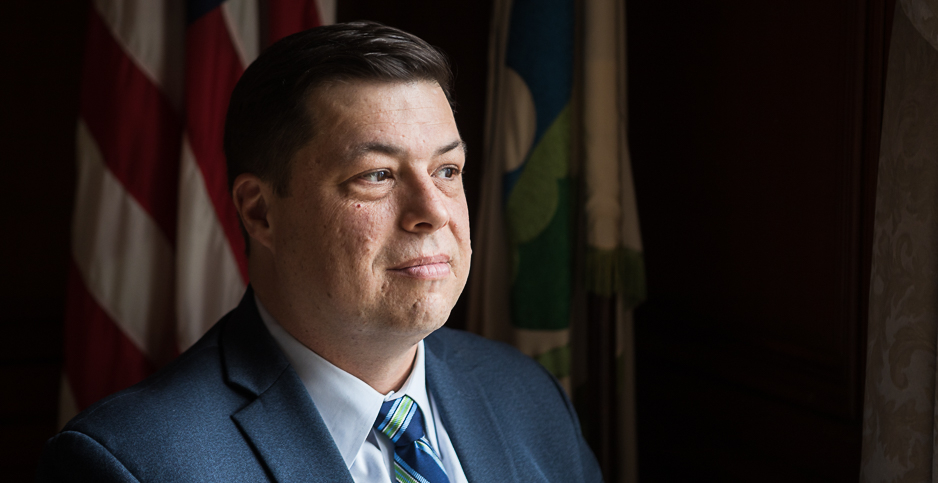 Sean O’Donnell is still wearing two hats — one as watchdog for the federal agency that protects the environment and another for a major polluter.

That duality was apparent today as O’Donnell, both the Senate-confirmed EPA inspector general and the Department of Defense’s acting inspector general, was on Capitol Hill to testify about one of the most pressing problems that plagues both agencies — per- and polyfluoroalkyl substances, or PFAS, the "forever chemicals" tainting water systems across the country.

EPA wants to regulate them, DoD needs to clean them up. Neither will be easy.

While the Pentagon job was expected to be a temporary post, O’Donnell remains there for more than a year and half. His concurrent service at EPA and Defense resulted from President Trump’s spree of firing inspectors general.

Gordon Heddell faced a similar situation. In 2008, the Labor Department IG was asked to also serve as the Defense Department’s acting IG. He knew Defense would be a big commitment of his time.

"I also understood it was effectively impossible to do both jobs," Heddell told E&E News.

He spent his day at the Pentagon and then headed to the Labor Department in the evening. Heddell, however, would turn over many of his duties at Labor to his deputy there so he could focus his attention on Defense.

Heddell, who was later confirmed as the Pentagon’s inspector general, said, "I tried to divide my time between the two, but it was almost impossible to do so."

With his mission as IG to root out waste and fraud, O’Donnell’s field of oversight grew exponentially when he took the Pentagon job. The Defense Department’s fiscal 2021 budget is more than $703 billion, compared to EPA’s current funding of about $9.2 billion.

O’Donnell’s arrival at DoD last year came when Trump went on a tear firing several inspectors general. By appointing O’Donnell as acting IG, Trump removed Glenn Fine from the position and from the Pandemic Response Accountability Committee, set up to oversee federal relief funds for the Covid-19 outbreak.

Public interest groups have taken note of O’Donnell’s twofold responsibilities, questioning how he can manage both agencies.

"I think it would be incredibly difficult to do two different, very demanding full-time jobs at the same time," Liz Hempowicz, director of public policy at the Project on Government Oversight, told E&E News.

Relief for O’Donnell is in sight but has not yet arrived.

Last month, President Biden nominated Robert Storch, the National Security Agency’s IG, to take the same job at Defense. Storch’s nomination, however, has not moved ahead yet.

In response to questions for this story, the EPA Office of Inspector General responded that O’Donnell has "balanced" taking charge of both government watchdogs.

"For more than a year, Inspector General O’Donnell has adroitly balanced leading the offices of inspectors general at the Environmental Protection Agency and Department of Defense," EPA OIG spokesperson Lori Hoffman said in a statement.

"Supported by seasoned staff, IG O’Donnell has remained fully engaged in the EPA OIG’s mission to provide vital oversight of the EPA and [the Chemical Safety and Hazard Investigation Board]," Hoffman said, adding, "The White House’s request that Mr. O’Donnell remain as acting IG at the DoD while Mr. Storch’s nomination is pending is a testament to their confidence in his abilities to effectively oversee both offices and their ongoing work."

That statement didn’t address some questions E&E News had, including how O’Donnell splits his days between EPA and the Pentagon’s IG offices.

Jon Rymer, who also served as DoD’s inspector general, said having an IG in two positions can harm both agencies. Further, the Pentagon watchdog often interacts with top-level military officials and political appointees, many of whom are Senate-confirmed, he said.

"You are not really on the same playing field when you are acting in a temporary position," Rymer said. "It’s not unprecedented the situation Sean finds himself in, but it would be very difficult for anyone to find themselves in two jobs at once."

Hempowicz is also worried about O’Donnell’s acting status at the Pentagon.

"You can’t be making big strategic decisions," Hempowicz said. "You are almost treading water until the next person comes in."

Flashpoints at the Pentagon

O’Donnell’s time at Defense so far has been busy.

The acting IG appeared before Congress within his first month in the Pentagon role.

In addition, House Republicans have sought to have him testify at a hearing on Biden’s withdrawal of U.S. troops from Afghanistan.

O’Donnell has also rebutted criticism from Sen. Chuck Grassley (R-Iowa) of his office’s review of the canceled cloud computing contract known as the Joint Enterprise Defense Infrastructure, or JEDI.

Further, William Walker, who formerly commanded the D.C. National Guard, has blasted the Defense IG office’s report on the Jan. 6 insurrection at the Capitol, saying it should be retracted, The Washington Post reported.

"We stand behind the conclusions in our review" of the Defense Department’s role on Jan. 6, the IG office said in a statement.

Heddell remembered the nonstop nature of the Pentagon IG job — traveling to the Middle East, testifying before Congress as well as conducting various audits and investigations.

EPA and DoD, the two agencies O’Donnell serves, can be at loggerheads. EPA regulates pollution while Defense is a major source of it.

PFAS, the "forever chemicals" that have contaminated drinking water across the country, is the latest sticking point between the two.

O’Donnell has noted the challenge for both agencies.

Last month, the EPA IG office chided the agency in its "management challenges" report for issuing health advisories for only two PFAS, not others found in drinking water, despite "the critical need." The report was signed by O’Donnell.

Also released last month, the Defense IG office said in its own management challenges report that the department had used firefighting foam containing PFAS at hundreds of sites, noting it has a responsibility to mitigate contamination from the chemicals.

Failing to take care of hazardous chemicals not only costs the Pentagon "billions in remediation and cleanup," the report said, "but also affects the reputation of the DoD and most importantly the health and well‑being of DoD personnel and their families, surrounding communities, and foreign partners."

O’Donnell signed that report as well.

PFAS has also sparked communication between the two watchdog offices.

In July, the Defense IG office asked their EPA counterpart to release a statement from O’Donnell, in which he said the Pentagon watchdog will continue to provide recommendations on how to handle PFAS while noting he launched reviews at EPA of the agency’s perfluorobutane sulfonic acid toxicity assessment and its chemical risk assessments, which includes PFAS.

Identifying himself as both the EPA IG and the acting DoD IG at the hearing, O’Donnell appeared alongside a colleague from the Pentagon watchdog office. Under discussion was a report by that office on the Defense Department’s attempts to control PFAS contamination.

"We are here today," O’Donnell said, "because the EPA and the DoD did not adequately identify, mitigate and remediate exposure to PFAS contamination."

Nikki Tinsley, who served as EPA inspector general, said O’Donnell’s dual role is "a huge opportunity" and could lead to joint projects.

Kyla Bennett, director of science policy for Public Employees for Environmental Responsibility, said about EPA and Defense, "They are consistently butting heads."

She, however, said O’Donnell is doing "a great job" as EPA IG, noting his office’s investigation of claims made by whistleblowers represented by PEER.

"I would love for him to stay at EPA and focus all his attention on EPA," Bennett said.

Tinsley, who is now retired, read the EPA watchdog office’s latest semiannual report and other reviews, noting the office is "doing good work."

"Whether he’s there, whether he’s not there, they’re doing the work." Tinsley said.

One IG enters, another leaves

O’Donnell was sworn in as EPA IG in January last year. Within months, he was serving at the Pentagon too.

On April 3, 2020, Trump announced he would nominate Jason Abend, then a senior policy adviser at U.S. Customs and Border Protection, for Pentagon IG. That grabbed the attention of the watchdog office’s staff.

Emails obtained under the Freedom of Information Act by E&E News show the following day, a Saturday, officials discussing on how to react to the nomination.

"Yes I think we should all talk. Can someone set up a conference call for today at 2:00," Glenn Fine, then the Pentagon’s acting IG, said in one message.

But by the following Monday, O’Donnell was appointed as acting IG and Fine was returned to principal deputy inspector general in the office. The day after that, a message was sent to the office on O’Donnell’s behalf, introducing himself in his new role and praising Fine and staff for their work.

Fine declined to comment when contacted by E&E News for this story.

A reporter later expressed in an email that they hoped Fine would not resign. "That makes two of us," a DoD IG staff member, their name redacted, replied.

Emails obtained under FOIA by Citizens for Responsibility and Ethics in Washington also show staff in the EPA IG office scrambled in response to the news.

"Glenn Fine will still be at DOD, so hopefully he’ll still be able to basically run things. Remains to be seen!" one said in a message (Greenwire, June. 17, 2020).

Fine later resigned and left the Pentagon IG office. Abend was never confirmed to the post. Consequentially, O’Donnell remains there to this day.

Rymer, now an independent contractor working in auditing and accounting, urged lawmakers to move faster on Biden’s nomination of Storch for Pentagon IG.

The Defense Department has long lacked a Senate-confirmed inspector general. The position has been vacant for almost six years, according to Oversight.gov, which was created by the Council of the Inspectors General on Integrity and Efficiency.

"Regardless of the circumstances that created the situation, that’s too long," Rymer said, who was the last Senate-confirmed leader of that office.