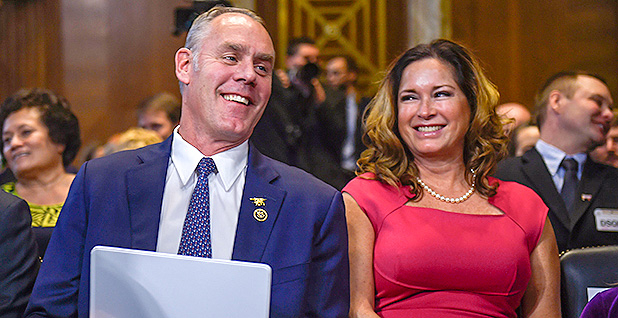 The 11-page report, speedily leaked yesterday prior to its official release, will be followed in time by the results of at least three other Zinke-focused inquiries still underway by Interior’s Office of Inspector General.

The accumulation of reports, whatever their substantive individual findings, can propel an ethics narrative pushed by Zinke’s environmental critics since the start of his tenure. They could also provide future subpoena and investigative hearing ammunition should Democrats reclaim the House.

"It is my responsibility to ensure that operations at the Department of the Interior meet the highest standards," Rep. Betty McCollum of Minnesota, the ranking Democrat on the House Interior Appropriations Subcommittee, reminded Zinke yesterday.

Titled "Investigative Report of Alleged Abuse of Position by Secretary Zinke," the IG document submitted to Capitol Hill yesterday afternoon was set for formal publication Monday. Congressional committees typically get IG reports 48 hours before their release on a workday.

The IG examined complaints that family members traveled with Zinke in government vehicles; that he asked that his wife, Lolita Zinke, be appointed as an Interior volunteer to legitimize her travel; and that he requested a government cellphone for her (Climatewire, Oct. 19).

The IG also looked at Zinke’s use of his protective service detail, including during a vacation he and his wife took to Turkey and Greece.

"While we found no prohibition against a security detail protecting Secretary Zinke during the Zinkes’ vacation, we learned that the U.S. Park Police had no finalized policy governing the detail’s activities and that the detail, which was unarmed, cost [Interior] over $25,000," the IG reported.

Zinke told the IG that he had not known at the time of the trip that the detail was unarmed, but the former member of the Naval Special Warfare Development Group, better known as SEAL Team 6, added that, "in his experience, ‘oftentimes you don’t need a gun.’"

The investigators also determined that "Zinke told his security detail on one occasion to drive a non-Government employee to the airport, but he was later told that this direction was not appropriate, and it has not happened again."

The IG further found that the Zinkes reimbursed costs associated with Lolita Zinke’s travel in Interior vehicles when required and that she ultimately did not become an Interior volunteer. Also, she never received a government phone, nor was one asked for, the IG found.

"While Secretary Zinke confirmed that his staff had researched the implications of making her a volunteer, he denied that it was an effort to circumvent the requirement to reimburse the DOI for her travel," the report states.

In a two-page response, Deputy Interior Secretary David Bernhardt cited Ryan Zinke’s "aggressive and consistent effort to enhance the ethics program and to solidify an ethical culture within the department."

Bernhardt also recounted that Interior’s Division of General Law "advised the secretary, as they had past secretaries," that a spouse could accompany the secretary in a government vehicle "notwithstanding a general department policy to the contrary."

The IG’s office, whose future leadership was cast into doubt during a six-day Trump administration mix-up that finally ended yesterday afternoon, still has three other Zinke-related reviews known to be underway.

One review is examining Zinke’s purported business activities in his hometown of Whitefish, Mont., including his possible role in a real estate deal backed by Halliburton Co. Chairman David Lesar (Greenwire, June 28). Another involves Interior’s review of the Grand Staircase-Escalante National Monument, and a third is looking into Interior’s handling of a heavily lobbied casino expansion in Connecticut.

The investigations are still being overseen by Deputy Inspector General Mary Kendall, an issue that was temporarily in doubt (E&E News PM, Oct. 18).

Last Friday, HUD Secretary Ben Carson wrote in a three-paragraph note, titled "A Fond Farewell," that attorney Suzanne Israel Tufts "decided to leave HUD to become the Acting Inspector General at the Department of Interior." Yesterday, following nearly a week of increasingly critical coverage that only drew more attention to the IG’s ongoing scrutiny of Zinke, Interior finally declared the Carson note was wrong about Tufts.

Asked whether Tufts was showing up at the department, the spokesperson said he wasn’t in a position to know because they worked on different floors.