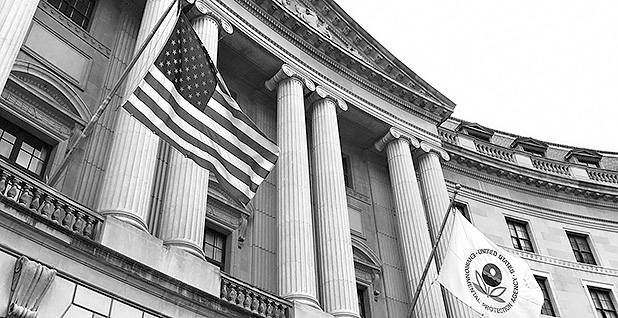 Coffee grounds, leftover soup and other "decaying liquid" bubbled out of water fountains at U.S. EPA headquarters in December.

Reports of dark, smelly liquid pooling in the agency’s hallways went viral online. Critics of EPA Administrator Scott Pruitt seized on the imagery to slam the Trump administration’s rollbacks of environmental rules. And grossed-out staffers complained about a terrible smell.

At least it wasn’t human waste.

"During this entire time there was no sewage water involved," according to an email from a General Services Administration staffer. The black, tarry liquid didn’t contain coliforms or E. coli, bacteria found in human waste, according to water testing results shared with GSA.

GSA documents, including emails, memos and even photos, obtained by E&E News under the Freedom of Information Act offer new details about the drinking fountain overflows at EPA headquarters. Multiple fountains on several floors in the William Jefferson Clinton North Building were found to be spewing black sludge.

The trouble started the morning of Dec. 14.

The engineers tried to snake the drain line on the second floor in a bid to unclog the blockage. The snake got stuck.

Agency employees began to complain to each other and to news outlets about the black sludge pouring out of the drinking fountains.

An EPA employee told E&E News that day, "There’s sewage covering the floors in the north building of headquarters." Just before 9 a.m., headquarters staff received an email warning them of plumbing problems and assuring staffers GSA was on the case (E&E News PM, Dec. 14, 2017).

Engineers were told to halt their work until after normal working hours "due to clean up efforts taking precedence and agency complaints regarding the situation at hand," according to the GSA email.

The plumber returned that evening to remove the stuck snake and open the drainage lines.

"Per the plumber, the black water is a product of coffee grounds, left over soup and any other liquid that was disposed of during a period of time," the GSA email said. "The decaying liquid is the cause of the black water and the smell."

Water testing was conducted later that month. Six water fountains were identified for testing, all located on the same affected pipe riser. Another fountain on the other side of the building was also tested to provide "a quality control/comparison sample," according to the testing results prepared by Mabbett & Associates Inc., an environmental health and safety consulting firm.

The testing samples were analyzed for coliform and E. coli bacteria. The presence of those bacteria in drinking water would be an "indication of recent sewage or animal waste contamination." But none was found.

"Testing results indicate that the flushing and chlorination efforts were successful," the memo said. "Based on the water results the fountains affected by the sewage incident may be brought back into service."

An EPA spokeswoman, noting the agency is a tenant in a GSA-managed building, referred questions about the water fountain leaks to GSA.

"GSA is not aware of any other reported complaints or incidents regarding the water fountains since December 2017," said the agency spokesman.

But although the fountains in the Depression-era building were technically given the green light, some agency staffers are probably steering clear — if they ever drank water from them in the first place.