Water infrastructure up next after ‘rock bottom’ brawl 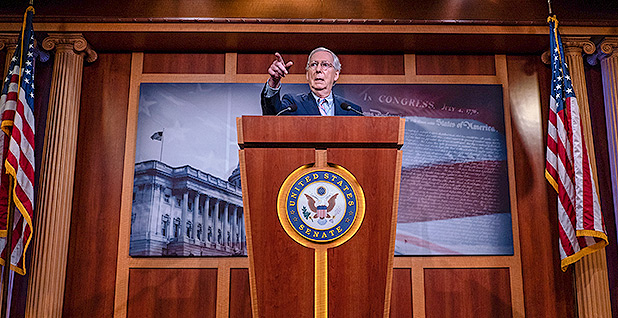 The Senate will hit the reset button this week to consider water infrastructure legislation, after the recent bitter and partisan brawl over sexual assault allegations and confirmation for Supreme Court Justice Brett Kavanaugh.

Speaking of the chaos that engulfed the chamber over the nominee, Sen. Lindsey Graham (R-S.C.) said last week, "If this is not rock bottom, I wouldn’t want to be in my business."

The bipartisan water infrastructure bill due for a procedural vote this evening is the first test for senators after the Kavanaugh vote.

Lawmakers have been working for weeks to hash out compromises on "America’s Water Infrastructure Act," S. 3021, which would authorize numerous port revitalization, flood control and storage projects.

It passed the House by voice vote last month and will likely pass the Senate after the procedural tally this week.

"We’re going to get that done," Barrasso said. "We’ll get water infrastructure passed."

‘There are still legislative accomplishments here’

More broadly, senators from both parties said the Kavanaugh drama wouldn’t bear down too heavily on other priorities.

Ironically, while the acrimonious confirmation fight played out, the Senate last week passed bipartisan opioids legislation by a 98-1 vote, as well as a package to reauthorize the Federal Aviation Administration and make major reforms to federal disaster law (E&E Daily, Oct. 4).

The FAA measure, which also would dole out $1.68 billion to victims of Hurricane Florence, flew through on a 93-6 vote.

Sen. Chris Coons (D-Del.), who was key to the negotiations that resulted in an additional FBI investigation into Kavanaugh and delayed the confirmation floor vote by a week, repeatedly joked with reporters last week that no one wanted to ask about the FAA bill, which included a provision he worked on with Sen. Bob Corker (R-Tenn.).

"It’s important that not get lost in all this, that there are still legislative accomplishments here," Coons said.

EPA and the Department of the Interior are operating on a stopgap measure until at least Dec. 7, but for the first time in recent memory, Congress passed the lion’s share of discretionary dollars before the end of the fiscal year Sept. 30.

"There has been an awful lot of bipartisan cooperation," Senate Majority Leader Mitch McConnell (R-Ky.) said Sunday on "Face the Nation." "So the notion that the Senate is somehow broken over this is simply inaccurate."

‘A battle of the heart and soul’

Still, the confirmation fight sometimes veered into personal attacks, and Democrats fear the Supreme Court’s ideology could shift right with Kavanaugh on the bench, particularly on cases dealing with environmental law and abortion.

Kavanaugh’s seating marks a 5-4 conservative majority on the Supreme Court.

But senators said, in short, that they don’t hate each other.

Sen. Roy Blunt (R-Mo.) similarly said he’s been a principal sponsor or co-sponsor on legislation with all but four Democrats, though he acknowledged a return to comity "will take awhile."

"The Senate’s not very big. It’s a matter of figuring out how you can find what you agree with somebody on and move forward on that," Blunt said. "There are clearly some hard feelings here, but this is not a place you get by not being fairly willing to roll with the punches."

Legislation aside, though, Democrats remain worried about the integrity of the Supreme Court and what the confirmation process will look like next time around.

For one thing, both of Trump’s nominees — Kavanaugh and Justice Neil Gorsuch — were confirmed by unusually narrow and largely partisan margins. Gorsuch got 54 votes, while Kavanaugh secured just 51.

"It is not a good day for the country when you have several justices on the Supreme Court who are confirmed by very narrow margins," Coons said, adding that there may be ways for the Judiciary Committee to ensure a "clearer and fairer process" next time.

Kavanaugh’s language during the opening statement of his second round of testimony — during which he rebuked Democrats and claimed to be the victim of a "calculated and orchestrated political hit" — also continues to raise eyebrows.

"The judicial temperament that he demonstrated in the hearing last week left me with the feeling I would not have nominated for, gosh, a judge in family court or magistrate, much less to be a justice of the U.S. Supreme Court," Carper, a former governor, said last week.

McConnell, meanwhile, shows no signs of slowing down on President Trump’s effort to reshape the judiciary after putting another justice on the Supreme Court. The Judiciary Committee is set to consider more nominees this week (see related story).

When asked Sunday whether he would maintain the standard he set before the 2016 elections — when he held a Supreme Court seat open for nearly a year despite President Obama’s nomination of Merrick Garland — should another seat come open ahead of the 2020 elections, McConnell hedged.

When it comes to the court, the bitter undercurrents will stick around for a while, Carper said.

"The Senate, generally amongst ourselves, tends to work pretty well together," he said. "What’s going on here is a battle of the heart and soul of the Supreme Court of our country. And that’s a lot different than water infrastructure legislation or FAA legislation or even the prioritization of our spending."