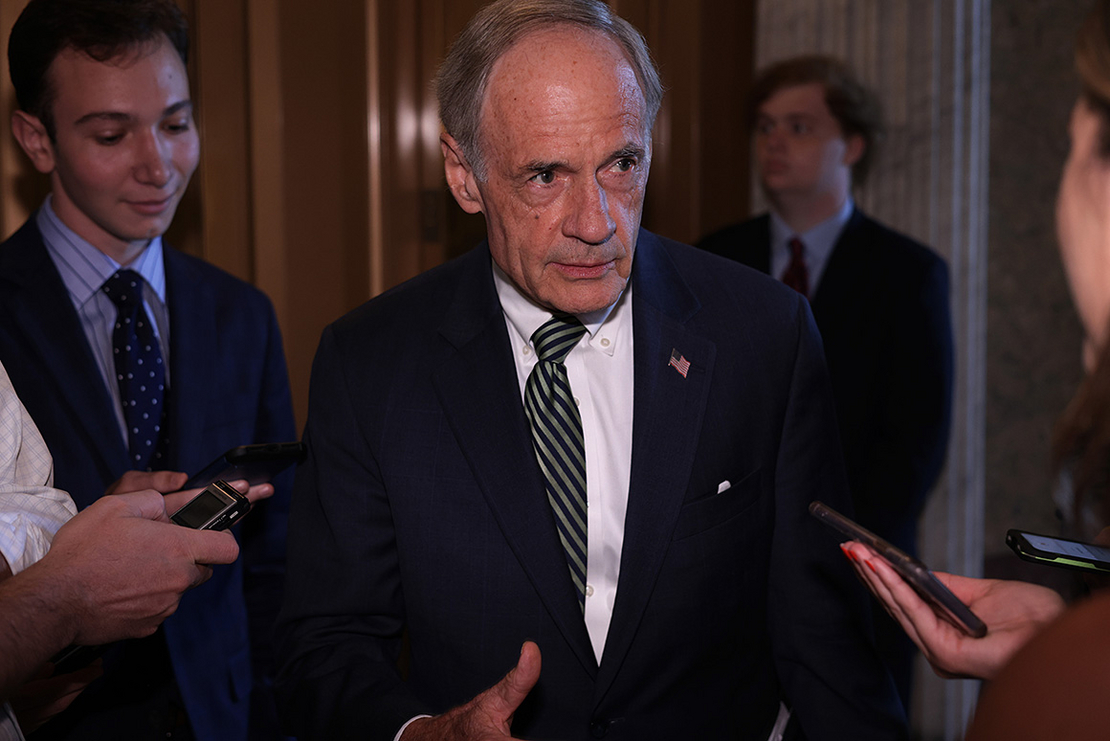 Disagreements over water and transit funding continued to hold up a deal on infrastructure legislation yesterday, with Democrats increasingly growing impatient to start voting.

Members of the 22-member bloc that is negotiating the bipartisan framework with the White House said over the weekend they hoped to seal a deal on $579 billion in new infrastructure spending yesterday, but the two sides were still trading offers last night (E&E Daily, July 26).

He and Sen. Tammy Duckworth (D-Ill.) last week had threatened to withhold support for the bipartisan bill over a $15 billion funding shortfall (E&E Daily, July 23). Any Democratic defections could imperil the whole process.

“I’m hopeful that we’ll somehow still pull this together at the end of the day,” Carper said. “It’s important that we provide more resources, not less, to meet our water infrastructure needs, our drinking water and wastewater needs across the country, that we provide that to state and local governments in ways that are flexible and actually enable them to meet their needs rather than be ironclad without any flexibility. And right now, I’m not sure how this is going to finish up, but we’re working on it.”

A Democratic aide said Carper is specifically concerned about having enough money to fulfill President Biden’s call for the removal of all lead service lines and ensure there’s “targeted relief” for underserved communities suffering from dangerous contamination from “forever chemicals.”

“The Republicans have rejected a water compromise in the global offer that would have kept total spending on water infrastructure to the agreed-upon $55 billion topline in a new spending. The global offer did not include funding the baseline for the Senate water bill,” said the aide referring to a broad offer from Democrats.

Both Brown and Carper have also threatened to oppose the bipartisan deal over the transit standoff, arguing they won’t support anything that provides transit less than the 80-20 split that transit agencies historically have received under federal surface transportation programs.

One Democrat involved in the talks, Sen. Jon Tester (D-Mont.), acknowledged that talks had stalled but said the bipartisan group “is still on track to get this done.” “We’ve got to make sure people keep talking, and we’re supposed to have it ready for prime time tomorrow,” he said.

‘Time to bring a bill to the floor’

“Since senators are still finalizing the text of the agreement, senators should be on notice that the Senate may stay in session through the weekend in order to finish the bill,” he said. Additional delays may cut into the chamber’s August recess, Schumer added.

But other Democrats signaled their patience with the six weeks of bipartisan talks has reached its limit. Their ranks include Majority Whip Dick Durbin (D-Ill.), who said yesterday that talks had gone on long enough. “I think it’s time to bring a bill to the floor,” he told reporters.

Should the bipartisan talks fail, Durbin said he hoped that the areas of agreement can be folded into the budget reconciliation package, which will allow Democrats to pass Biden’s infrastructure agenda along party lines in both chambers. “That still remains to be seen as to whether all of that could go into a reconciliation” bill, he said.

Sen. Mazie Hirono (D-Hawaii) said patience within the Democratic caucus is wearing thin. “At some point all of the Democrats are going to say, ‘This has gone on long enough,’” she said on CNN yesterday. Should the talks collapse, Hirono suggested that Democrats might simply add as much of the “traditional” infrastructure from the bipartisan talks into the reconciliation package.

“Both of them are extremely important,” Manchin said of the two-track process Democrats are pursuing to enact Biden’s infrastructure agenda. “If one falls apart, then how do you do the other one?”

White House press secretary Jen Psaki downplayed the delay in reaching a deal and said the administration remains “confident” the talks will be successful. “As is normal in the end stages of big negotiations, there are some outstanding issues,” she said yesterday.

“Democrats made an offer that was designed to resolve each of these outstanding issues, which involve proposed compromises on our part on theirs. … [W]e’re also interested in any Republican counteroffers. So I would say this is to be expected.”

But she conceded that “time is not endless.” “We are certainly on a timeline here and will work closely with Leader Schumer to get it done,” Psaki said.

Adding another wrinkle, former President Trump also weighed in yesterday as well, calling for Republicans to abandon the talks.

“Don’t do the infrastructure deal, wait until after we get proper election results in 2022 or otherwise, and regain a strong negotiating stance,” Trump said in a statement. “Republicans, don’t let the Radical Left play you for weak fools and losers!”

Schumer in turn brushed off the “absurd demands of the disgraced former president” and urged Republicans to keep negotiating.

“Republican senators must ignore former President Trump if we’re ever going to make progress for the American people,” he said. “He is rooting for our entire political system to fail. I and the rest of my Democratic colleagues are rooting for a deal.”