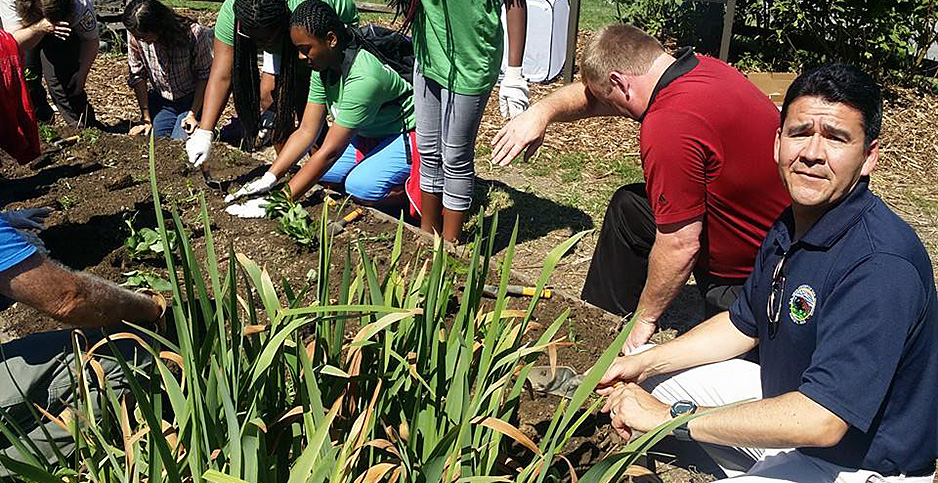 President Biden has selected Michael Connor as his nominee for Department of Defense's assistant secretary of the Army for civil works. Connor, pictured at the far right at a 2015 service event, previously served as the Interior Department's deputy secretary. U.S. Department of Interior/Flickr

President Biden’s pick this week to oversee the Army’s vast natural resources operation would bring to the job decades of water experience at the Interior Department and on Capitol Hill.

The president tapped Michael Connor to be the Department of Defense’s assistant secretary of the Army for civil works, which oversees the Army Corps of Engineers and its huge network of dams and other projects.

Connor would play a major role in some of the most controversial projects facing the Biden administration in the environmental arena, including the Keystone XL and Dakota Access pipelines, as well as Clean Water Act permitting.

Those who know him said Connor is highly qualified for the post.

"He’s about as experienced as a person could be for this kind of position," said former Sen. Jeff Bingaman (D-N.M.), Connor’s onetime boss on the Senate Energy and Natural Resources Committee. "He’s very knowledgeable about public lands and public policy in general and has very good people skills and is able to get things done."

Nominating Connor, 57, furthers Biden’s pledge to address long-standing tribal issues. The nominee is a member of the Taos Pueblo and would join Jaime Pinkham, a member of the Pacific Northwest’s Nez Perce Tribe and an expert on tribal water rights, at the top of the Army Corps (Greenwire, March 12).

He would oversee a wide range of issues at the Army Corps, including navigable waterways, flood risk mitigation, and aquatic ecosystem restoration at the Everglades and Great Lakes, among other places. The Army Corps would also play a critical role in crafting new Waters of the U.S., or WOTUS, regulations that define the scope of the Clean Water Act, a top priority for the Biden administration.

Connor, who currently works for the firm WilmerHale, is a familiar face in the water world.

During the Obama administration, Connor was Interior’s deputy secretary and, before that, commissioner of the Bureau of Reclamation. He was floated as a potential Interior secretary pick for Biden, a post that went to Deb Haaland.

He’s "a very savvy policy wonk who knows how to effectively use the levers of government," said Anne Castle, who worked with Connor in the Interior Department.

Castle, who was Interior’s assistant secretary for water and science during the Obama years, had the unique experience of being Connor’s boss when he was Reclamation commissioner. Then, when he was promoted to Interior deputy secretary, she reported to him.

While he’s new to the Army Corps, Castle said she sees a lot of similarities between what Connor did at Interior and his new post.

"I just think he’ll do a fabulous job," said Castle, who is now a senior fellow at the Getches-Wilkinson Center at the University of Colorado’s Law School.

Castle and others said Connor is an effective consensus builder who dives into the minutiae of budgets and policy. And he isn’t afraid to take on controversial projects.

"He’s as cool a customer as you’ll find," said James Eklund, the former director of the Colorado Water Conservation Board, who has worked with Connor extensively on Western water issues.

Now, with the new administration’s focus on infrastructure, Connor could be instrumental in turning the president’s climate rhetoric into action at one of the government’s most byzantine agencies.

Lowry Crook was working on President Obama’s Council on Environmental Quality when he met Connor.

Crook said that given Connor’s deep expertise, he is ideally suited to help the Biden administration understand how the Army Corps fits into broader priorities like climate resilience and infrastructure.

"The Army Corps of Engineers may not be the first agency you think of," he said, "but I think he’ll be able to help the administration understand how [the agency can] support all of those priorities."

Connor grew up in Las Cruces, N.M., and graduated from New Mexico State University with a degree in chemical engineering. After a few years working in that field in the late 1980s, he enrolled in the University of Colorado’s Law School.

From there, his work in government took off quickly.

He worked for several years in Interior’s Office of the Solicitor, largely on American Indian affairs. By 1998, he was director of the Secretary’s Indian Water Rights Office.

During the George W. Bush administration, Connor worked with Bingaman as counsel to the Senate Energy and Natural Resources Committee.

Bingaman recalled that Connor was instrumental in delivering a drinking water system to many parts of the Navajo Nation, the sweeping reservation that spans Arizona, New Mexico and Utah and has continued to have major problems due to a lack of access to clean water, including elevated COVID-19 death rates (Greenwire, April 28).

"He’s got all the qualifications a person could hope for," Bingaman said. "He’s a good manager, he knows the issues, he’s got great people skills and he knows how to get things accomplished."

There, Connor dove into some of the most complicated disputes at an agency with 5,600 employees and a budget of more than $1 billion.

For example, Connor negotiated a deal to resolve a major drainage problem in California’s San Joaquin Valley involving some of the country’s most productive farmland.

Farms in the Westlands Water District sit atop a thick clay surface that catches irrigation water before it can seep deeply into soil, allowing contaminants like selenium to accumulate.

The district gets its water from the federal Central Valley Project. And ever since the government completed the unit that delivers water to Westlands, it has known it would need to construct infrastructure to shuttle drainage water away. It never has, leading to decades of litigation with the politically powerful farmers.

Connor reached a deal in 2015 that required the farmers in the Westlands Water District to retire at least 100,000 acres of land and build the drainage infrastructure themselves. In return, the government would forgive Westland’s remaining debt for the construction of the project, more than $250 million.

Interior touted the deal as a worthwhile compromise. Environmentalists and some of their Democratic allies on Capitol Hill, however, sharply criticized it as giving away too much to the Westlands Water District and the farmers. As a result, Congress never ratified the deal and the issue remains percolating in federal court (Greenwire, July 21, 2020).

Connor also worked to address a prolonged drought during his time at Interior, including the complicated politics of agricultural and endangered species needs, noted Crook, who served as principal deputy assistant secretary of the Army for civil works — the No. 2 person in the Pentagon overseeing the Army Corps — from 2015 to the end of the Obama administration.

"He was just a very trusted voice on all sides about complicated water issues," said Crook, who is now a partner at the law firm Best Best & Krieger LLP. "He helped navigate difficult issues … responding to both Republican and Democratic legislation."