Waters on track to rise for centuries, even if emissions stop 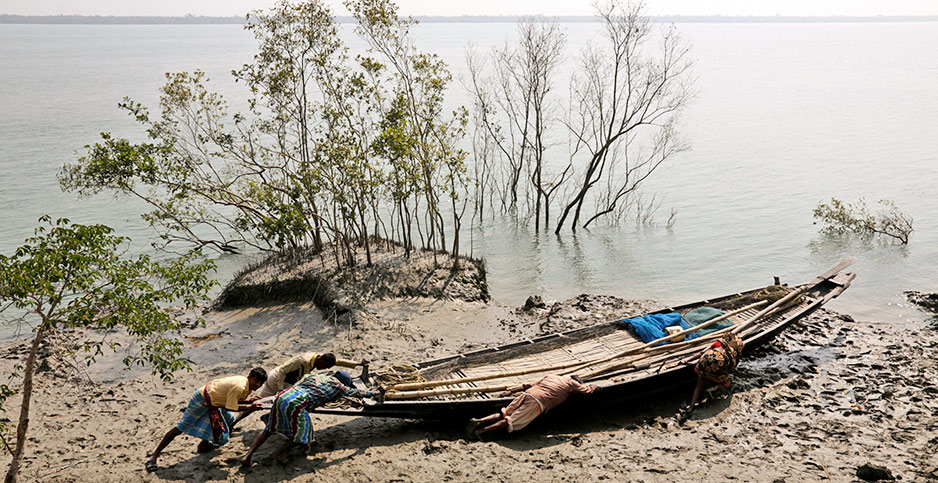 In this 2015 file photo, villagers push a fishing boat to the water in the Sundarbans, India, an area where seas are rising twice as fast as the global average. Bikas Das/Associated Press

It’s a given of climate change that greenhouse gases emitted today will shape the world for future generations. But new research underscores just how long those effects will last.

A striking new study published yesterday in the journal Nature Communications suggests that sea-level rise — one of the biggest consequences of global warming — will still be happening 300 years from now, even if humans stop emitting greenhouse gases before the end of the current century.

What’s more, the longer it takes to start reducing global emissions, the higher those future sea levels will be. The study suggests that for every additional five years it takes for emissions to peak and start falling — for instance, if emissions were to reach their maximum levels in the year 2030, as opposed to 2025 — sea levels will rise an additional 8 inches by the year 2300.

"The Paris Agreement calls for emissions to peak as soon as possible," researcher Carl-Friedrich Schleussner of the Potsdam Institute for Climate Impact Research, one of the study’s co-authors, said in a statement about the new paper. "This might sound like a hollow phrase to some, but our results show that there are quantifiable consequences of delaying action."

The study emphasizes an important scientific concern about the progression of climate change — that its effects don’t always occur immediately, or even quickly in some cases. Even after humans stop emitting greenhouse gases into the atmosphere, global temperatures are expected to continue rising before they finally stabilize, potentially for decades. And even after temperatures stop rising, other effects of climate change may continue to go on for hundreds of years.

Sea-level rise is one example. Rising seas are caused by the combination of a number of different processes, including the warming of the ocean, which causes the water to expand in volume, and the melting of glaciers — particularly from the massive Greenland and Antarctic ice sheets. Both of these processes may continue long after human-caused greenhouse gas emissions have come to a halt.

The melting of the ice sheets, in particular, is a process that may be difficult to stop once it’s set in motion. Even after global temperatures stabilize — and even if they stabilize within the 2-degree Celsius threshold outlined under the Paris climate agreement — the warming that occurs up to that point may destabilize the glaciers to an extent that continued ice loss becomes unstoppable far into the future.

In short, scientists generally believe that current greenhouse gas emissions have already committed the world to significant levels of sea-level rise for generations to come. The question is how much — and to what extent different strategies for curbing emissions now may mitigate sea-level rise in the future.

To investigate, the authors of the new study — led by Matthias Mengel of the Potsdam Institute — used climate and sea-level models to simulate a range of scenarios for future greenhouse gas emissions. In this study, each of the scenarios assumes the 2 C temperature target is ultimately met, but they differ in how quickly global emissions peak and fall to zero.

These scenarios are in keeping with reports from the Intergovernmental Panel on Climate Change, which has presented a range of possible emissions-reduction scenarios consistent with the 2 C target. For instance, global emissions could peak in the year 2020, and then fall at a certain rate every year afterward in order to stabilize temperatures within a 2 C threshold. Or they could peak at a later date — in 2030 or even 2035, for instance — and fall at a much faster rate to still meet the target. Generally, each of these trajectories assumes that human-caused emissions must cease entirely by about midcentury.

Within these scenarios, the new study finds that sea levels will likely rise by between 2.3 and 4 feet by the year 2300 — and they’ll likely continue to rise even beyond that point. But peaking emissions earlier will keep sea levels at the lower end of the spectrum, the research notes. Every five-year delay in the peak tacks another 20 centimeters, or nearly 8 inches, on to the total estimate for 2300.

The findings are generally consistent with other recent studies, according to sea-level expert R. Steve Nerem of the University of Colorado, Boulder, in a comment to E&E News about the new research, and "help us as we seek to understand how sea level will respond under different scenarios of greenhouse gas emissions."

And these scenarios are all assuming that the 2 C target is met — a goal scientists increasingly believe is slipping out of reach. For the time being, most researchers agree that the individual pledges world nations have submitted under the Paris climate agreement are still not strong enough to meet that goal. If temperatures rise beyond that point, future sea-level rise will be even worse.

Other recent research, focusing on more near-term sea-level-rise projections, has helped to drive that point home. Several studies in the last year or so have suggested that sea levels are not only rising, but the rate of increase is actually accelerating.

Just this month, a paper in the Proceedings of the National Academy of Sciences suggested that sea levels have been rising by an average of about 3 millimeters (around one-tenth of an inch) per year since the 1990s, and that the rate is gradually speeding up. If the process continues at its current rate, sea levels could rise by more than 2 feet by the end of this century alone.

Other recent studies have also suggested that previous estimates of sea-level rise, under a variety of future climate scenarios, may be too modest. Several papers in the last year, for instance — including an October paper in Environmental Research Letters and a December paper in Earth’s Future — suggest that better accounting for some of the physical processes affecting ice loss in Antarctica could significantly increase estimates of future sea-level rise. Under severe climate change scenarios, these new studies suggest that sea levels could rise by more than 4 feet by the end of the century.

There’s still a great deal of uncertainty associated with sea-level projections, particularly so far in the future, that largely hinges on scientists’ developing understanding of how the world’s ice sheets will respond to continued warming and the physical processes that mold those responses. Recent research tends to suggest that the future may carry more risks than previously suspected and that human societies should be planning accordingly.

But while the new study reaffirms that climate change carries consequences for hundreds of years to come, climate targets notwithstanding, it also emphasizes that earlier, more aggressive climate action now may still improve life for generations yet to be born.