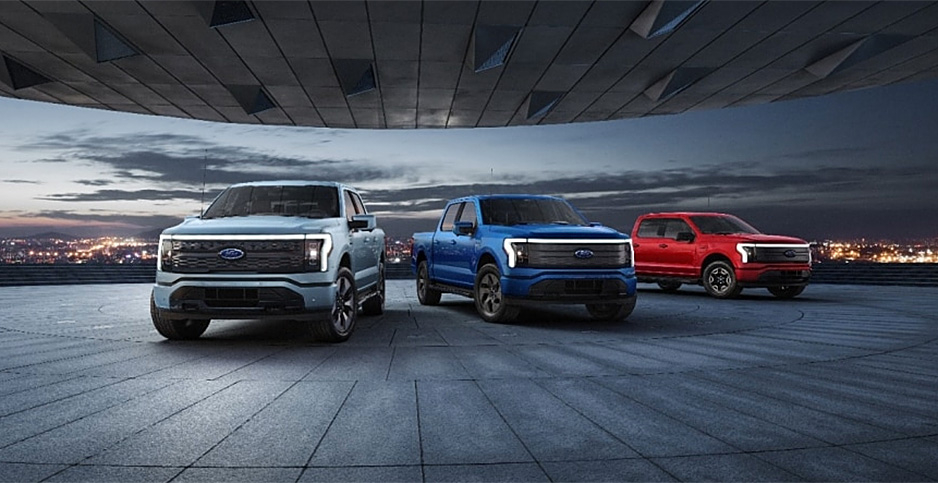 Ford Motor Co. this week introduced an electric version of its bestselling F-150 truck, instantly becoming a pivotal player in whether electric vehicles get popular and help fend off climate change.

In a glitzy unveiling at its factory in Dearborn, Mich., on Wednesday, the automaker sought to compensate for the EV’s shortcomings — like limited range and a still-inadequate network of charging stations — by leaning hard into benefits only EVs can provide, like powering a construction site or a home during a blackout.

And Ford said that it will build two large factories to create batteries, catapulting the automaker from a laggard in the battery-production space into the leading pack of EV makers.

Bill Ford, executive chairman and great-grandson of Henry Ford, the company founder, called the new F-150 Lightning "a defining moment for our company, a watershed moment for our industry."

The F-150 has been the country’s bestselling vehicle for more than three decades, and a conversion to electric could have an impact on the trajectory of EVs and the country’s carbon emissions, observers say.

John Gartner, the director of EV research at the Center for Sustainable Energy, said Ford sold more than 203,000 F-series trucks in the first quarter of this year, compared with the 98,000 electric vehicles that Americans bought in the same period.

"The potential of launching the first mass-market electric pickup truck is likely to really reinvent the way people see EVs and the EV market," he said.

But the question remains: Are America’s truck buyers ready to dismiss fear of the unknown and take the leap?

"I think the concern about the electric pickup truck is whether the market will match the hype," said Matt DeLorenzo, the managing editor for news at Kelley Blue Book, which reports values for used cars.

Ford made it clear that it has the average truck buyer in mind, and analysts say it might have struck the right note.

"They haven’t just slapped an electric vehicle powertrain into the truck," said Michelle Krebs, director of automotive relations at AutoTrader.com. "They really thought it through as a whole package. They have done a lot to the truck to make it irresistible beyond it being electric."

What turned many auto experts’ heads was the price.

The stripped-down F-150 Lightning starts at $39,974, according to Ford. That is comparable to what Tesla Inc.’s entry-level Cybertruck might cost and far less than the $75,000 R1T pickup coming from EV maker Rivian or the $80,000 Hummer from General Motors Co.

Adding in the $7,500 federal rebate — which GM and Tesla buyers no longer get — and the Lightning is only a couple of thousand dollars more than the cheapest F-150 that runs on gasoline.

Because electricity is usually cheaper than gas and the average F-150 driver spends $2,100 on fuel every year, according to federal data, the Lightning could be easy on the pocketbook.

However, "we’ll see if you can actually get one for that," Krebs said.

Ford is also marketing the basic version as a fleet vehicle. Government and private fleet managers are major F-150 buyers and could get large volumes on the road regardless of what other consumers do.

Beyond the basics, the price rises steeply, to $52,974 for the mid-range XLT version and $90,474 for a Lightning with all the bells and whistles.

Auto industry watchers said that Ford did an adroit job of leveraging the attributes that an EV can bring.

It’s the fastest and torquiest basic F-150 ever made. And the Lightning’s front "frunk" — where the internal-combustion engine block would usually be — is a 400-liter space that is big enough for two sets of golf clubs.

The vehicle also sports as many as 21 plug points, in the cabin, frunk and bed, that can provide 9.6 kilowatts of power to anything from a laptop to a refrigerator to a table saw.

The vehicle is also the first EV on the U.S. market designed to power a home in case of a blackout, featuring two battery sizes whose specs haven’t been released. But Ford promises that the larger battery could power a home at 30 kilowatt-hours of electricity use for three days.

Ford has partnered with residential solar provider Sunrun Inc. to make the necessary changes to a home to make that possible. That will come at an extra fee, according to Ryan O’Gorman, Ford’s energy services lead.

On the downside, taking advantage of all those electric goodies means there are less electrons left over for driving.

The vehicle comes in two ranges, of 230 and 300 miles. Jim Farley, Ford’s CEO, said at the vehicle’s unveiling that "range will never be a concern with this truck."

But range might be a concern if a driver is towing or hauling, which are major reasons people buy F-150s. To offset that, Ford has designed in a weight scale that will help calculate an accurate estimate of the battery’s drain time.

The electrical riches that come with the new F-150 are probably part of a trade-off that Ford designed, said DeLorenzo of Kelley Blue Book.

"I think what happened here is Ford has figured out they need to find another way to make the vehicle useful beyond the usual payload or towing," DeLorenzo said.

The Lightning, unlike Tesla’s Cybertruck, looks in almost every way like any other F-150. The only design change is a light bar that sits like a brow above the headlights.

"I think that’s a big plus, especially among truck buyers, who are a little more tradition-bound," said DeLorenzo.

On the manufacturing front, Ford also said yesterday that it will work with SK Innovation, a South Korean battery maker with which Ford already has a relationship, to co-create two large battery factories in the U.S.

SK Innovation will be supplying about 60 gigawatt-hours of battery cells and modules annually for Ford, starting in the mid-2020s. The locations for the factories have not been announced.

The plan is similar to that of GM, Ford’s leading domestic competitor and America’s largest automaker. GM is working with South Korea’s LG Chem to build two battery factories in Michigan and Tennessee that will make the company’s Ultium batteries. Another major source of domestic auto batteries is Panasonic, which makes batteries with Tesla at a massive factory in Nevada.

Ford is following in GM’s footsteps "to not be totally dependent on outside suppliers for a critical component," DeLorenzo said.

The new venture appears shortly after SK Innovation’s close brush with disaster. Earlier this year, a U.S. trade court banned the company from importing battery parts for 10 years, after finding that company executives had systematically impeded the court’s investigation into an earlier claim of trade secret theft filed by LG Chem.

The ban would have effectively erased SK Innovation’s growing role in the American electric vehicle field — at least according to the company, which vowed to walk away from development of its $2.6 billion battery plant in Georgia.

It also alarmed Ford, which said it would have trouble finding another source of batteries for the F-150 and other EVs in coming years. "EV batteries cannot simply be swapped like batteries in a flashlight," its representatives wrote in a letter to the trade court last year.

The expanded Ford-SK Innovation partnership highlights how consequential the trade case was for the future of U.S. EV production. Spokespeople from the USTR and SK Innovation did not respond to E&E News inquiries.

Kim Jun, SK Innovation’s chief executive, said the company was "proud to be opening this new chapter" in Ford’s history. "Our [joint venture] with Ford will play a pivotal role in fleshing out the electric vehicle value chain in the United States, a key objective of the current U.S. administration."